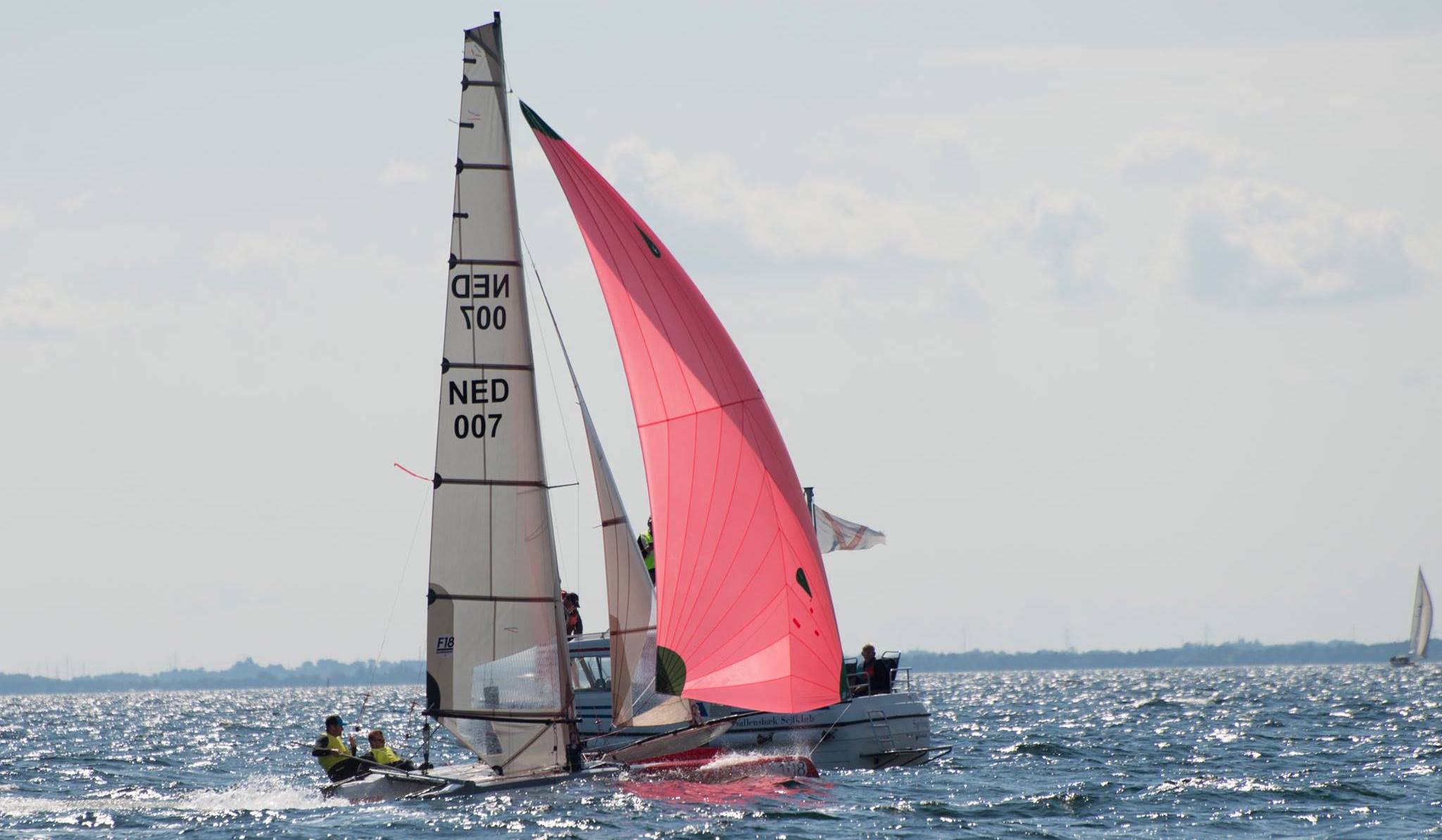 Last weekend a great Formula 18 event has ended, the F18 Worlds in Copenhagen, Denmark. For the first time in his impressive career skipper Mischa Heemskerk (NED) has captured the F18 Worlds trophy, together with his crew Stephan Dekker (NED). Directly following the event and celebrations these busy Champs had to fly back home for all of their other projects. We spoke to Mischa, while he was rigging a new TF10 foiling trimaran in Holland, and asked him how they have experienced the event. 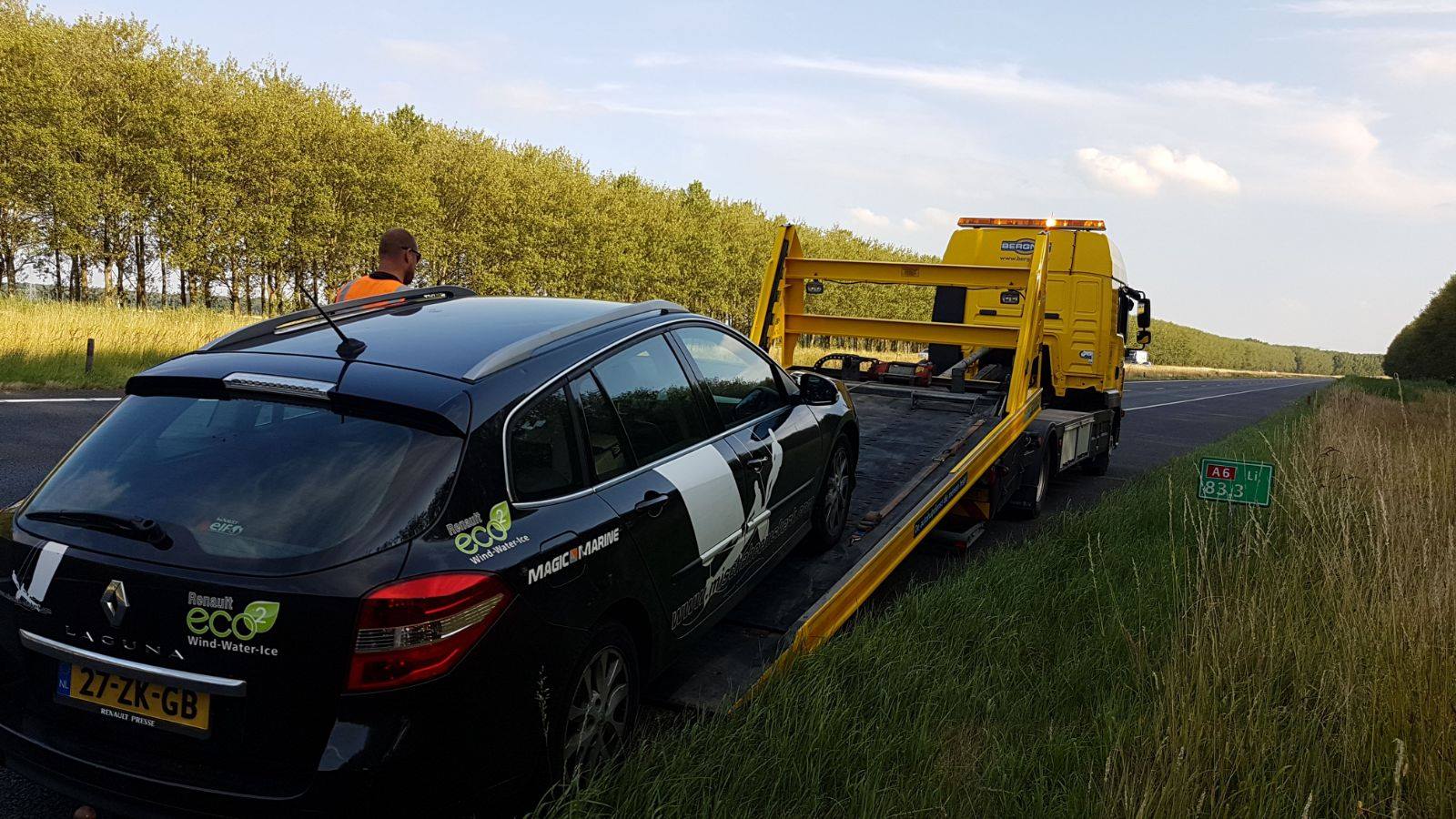 First of all we want to know what preparations these Champs did in the last weeks, you don’t ‘just win’ a F18 Worlds…right? Mischa Heemkserk:”Well, it’s funny how things evolved. We started about 2 weeks before the Worlds building our Scorpion F18. It was literally still in cardboard boxes and wrapped in plastic. Stephan and I built the boat together in front of my house in the evening after work. After we put the boat together it was time for some training. I hadn’t sailed the F18 since the Worlds 2015 in Kiel (Germany) and for Stephan this was his first F18 Worlds ever, but everything felt good and we quickly discussed and practiced our tactics. The week before the Worlds I did some extra training in light weather conditions in Muiderzand. This went pretty well, so ‘we were good to go’…. except the fact that my car broke down! Many thanks to the others for taking our boat to Denmark! To drive the boat to Copenhagen wasn’t an option anymore… Sunday morning we arrived at the Vallensbæk Sailing Club and pushed the boat straight into the water for training with Maarten & Ad Noordzij (NED) because we were worried that there was no wind predicited for Monday, so this was our first and maybe only chance to sail the boat in local conditions before qualifications started.”

Qualifications (Tuesday & Wednesday)
On Tuesday, July 11th the F18 Worlds 2017 began with the 6 qualification races. Heemskerk: “This first day did not go very well. When we were out sailing, after the first tack we noticed a lock ring wasn’t taped off and suddenly our mast came down. We tried to fix this on the water, but had to go onshore. So we missed the second race, but luckily we had no damage, and were able to sail the 3rd race that day. After day 1 we were 57th overall! Wednesday every thing went much better. Stephan and I had good communication at the starts, our boatspeed was good, the decksweeper worked well and we kept calm…. so were able to sail on routine and qualified 17th overall and got our Gold Fleet ticket!”

Gold Fleet Races (Thursday, Friday and Saturday)
“Thursday racing was really nice. We had much more wind than the previous days and it was pretty shifty. We had good starts, chose the best side of the course, and took advantage of the shifts with our decksweeper…. it all worked out as planned! But, we also noticed that we could sail a bit faster. Upwind we were fast enough, but downwind we still had some tweaking to do. On Friday during the races we were also trying to increase our downwind boat speed. On Saturday we noticed we found the solutions because even the ‘Sach Brothers’ couldn’t keep up anymore with their (only) 140kg crew weight. During the last race it was hard to stay focussed, I remember I was busy to figure out if we already won or not…. but quickly focus back to sailing and from 5th back to 2nd at the finish after a nice battle“, Heemskerk tells.

HOLY SH#T
“After the finish we suddenly saw all the RIBs coming towards us with champagne bottles and our national flag and started to realize we did win the event! This was really amazing and also underlined how cool it is to sail in the F18 class. It’s really great to be back! Also special thanks to the organization who did a tremendous job hosting this big event. With so many boats you can see it’s going very well with the class too and people really want to compete in big fleets. Cheers!”

Final question: Next year the F18 Worlds 2018 will be held in October in Florida (USA), will you defend your title there? Heemskerk: “I really would love to defend my title there, this time together with my wife Carrie. Many of her relatives live in Florida and we never sailed there together, that’s still on our bucket list. Hope to see you guys all there!”