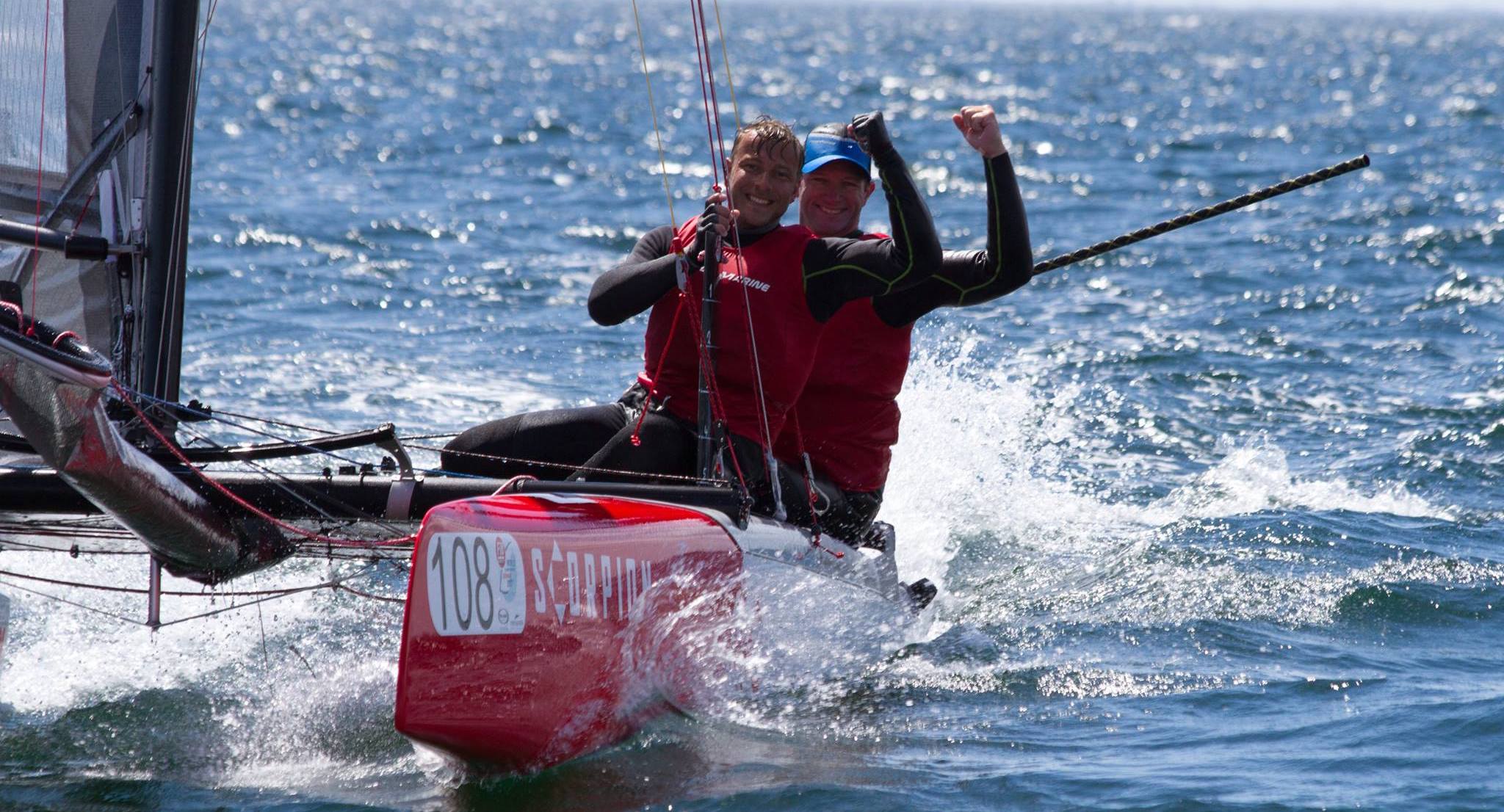 He did it! After several attempts the last few years Mischa Heemskerk (NED) together with his crew Stephan Dekker (NED) win the Formula 18 Worlds. With an impressive serie of results since they entered the Gold Fleet last Thursday they kept Demesmaeker/Tas (BEL) behind. Third on the podium this year are Van Dijk/De Waard with equal points as number two, just keeping both teams Booth father/son (ESP) and Paschalidis/Trigkonis (GRE) by 2 points from the podium. It’s also the FIRST time in history a Belgium team has been on the podium of a F18 Worlds! Congrats to you all!

Today races were postponed till 12:00. Then a gentle 6-8 knots of breeze filled in and races were started,  nervous sailors forcing Race Committee to use Black Flag. After a second general recall 15 boats got a Black Flag Disqualification (BFD), and the third attempt was the right one, all boats being clear, and the fight for the trophy truly beginning. Heemskerk/Dekker had a good start and were 1st at the top mark, followed by Sach/Sach (GER) and Northrop/Barker (GBR). After the first round at the gate Heemskerk/Dekker were leading followed by Van Dijk/De Waard (NED), Sach/Sach and Northrop/Barker. With a huge gap Heemskerk/Dekker finished first.

The second race of the day was held in superb conditions with average 10 knots of breeze. Again Master and Commander Heemskerk/Dekker had a good start and, not surprising anymore, another win! Second place for Van Dijk/De Waard and Booth/Booth were third. In the last race of the day Heemksker/Dekker had a tight battle with Van Dijk/De Waard who won this last one, Heemskerk/Dekker missing the full final score by two lengths, finishing second this time and González Smith/Heuser took the 3rd position.

More information & quotes from the sailors will be published later after the prize giving and celebrations.

The next Formula 18 Worlds 2018 will be held in October. Host of the venue is the Sarasota Sailing Squadron Yacht Club in Sarrasota – Florida (U.S.A.). The first F18 Raid Worlds (long distance racing) will be held next month in the Stockholm Archipelago from 5-9 August 2017.

Photos taken from the photoalbum of the Facebook F18 Worlds 2017.