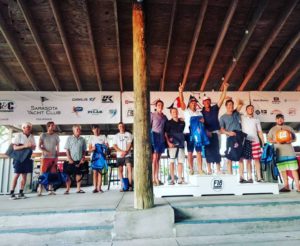 Final curtain fell on 2018 F18 Worlds in Sarasota. Last day made once more competitors nerves torn, but Race Officer did finally succeeded in launching 11th & 12th races, permitting a second discard, before Race 13 to be stopped in the last minute before start, due to a dying wind, AP on A being then displayed.
When all competitors present in Sarasota did suffered from unstable wind conditions from the very beginning of the championship, and when most if not all of them got at least one or two bad results, one can assess of the perfect control demonstrated by Greek pair Paschalidis-Trigonis, getting four bullets and nothing worse than a 8th, fully deserving their World Champions Title, then reaching their major objective for 2018 season, following the European crown rewarded last July in Spain….
Eastern Yacht Club members Michael Easton-Tripp Burd got a pretty consistent series, getting 50 points, when, due to the second discard, Panama City pair Taylor Reiss-Matthew Whitehead (53 points) step on 3rd place on the podium, when Dutch father and son team Hans & Marius Van Dam (55 points) had to step back from 2nd to 4th.
Even they won Race 11, Burvill-Puttman (AUS, 60 points) finished 5th overall, preceeding Pete Melvin & Ferdinand Van West and Booth father & son (ESP).
From a Class point of view, to count no less than five different designs in the top ten is one more proof of the interest and effectiveness of the Formula 18 box rule, written 25 years after ago.
Full results here.
Have a look on daily reports on class website: http://www.f18-international.org
Class Facebook page: https://www.facebook.com/F18International/
Event Facebook page: https://www.facebook.com/F18Worlds2018/

Pictures by Ellinor from Ellevated Creative.