To all F18 sailors worldwide!!! We all look forward to another great year. Work has continued through the winter in the North while those in the South have been developing and fast. The activity that our Australian friends have done is impressive and we look forward to positive reports from “down under” as the new Committee get established.

There has been some negative talk about the future of the F18 Class, this has surprised and disappointed me. I can tell you that we are as strong as we have ever been, and look forward to another great year. We have great advantages, F18 is a pleasure craft for the Sunday sailor, it is an outstanding “round the cans” racer for the Club and professional sailor and the only choice for long distance racing, where F18 truly excels.

We enjoyed a successful F18 Worlds in Germany with good numbers and a great positive feeling at the Council Meeting. But we start another year and at this exiting time as we plan weekends for the next few months. We have received the sailing programmes from Sweden and Netherlands, they are on the IF18CA website, and we ask ALL National Class Associations (NCA’s) to do the same, simply by sending us their Google Calendar address. It is important to let the sailing world know just how much F18 activity there is. The development in Netherlands is particularly encouraging as for years they thought of themselves as the leading multihull country in Europe. Our Dutch F18 team are determined to re-create that feeling. Olivier and I were invited to go meet them all at their first regatta last year and the enthusiasm was infectious.

Your Council have just completed the latest round of electronic voting. It did get complex with the amendments but all NCA managed to complete. This process IS very important, the old winter Paris meeting attracted just the European Classes and we are a worldwide Class and we want to hear the opinions form all NCA’s, electronic voting allows this to happen. So this method widens the participation and reduces the costs for our European NCA’s.

Let me summarise the voting decisions

There were conflicting views as to how the vote counting should be managed, either 50% + of all NCA’s votes or majority vote ignoring the abstentions. In the end, the differences were marginal, and the voting intentions of the Council were clear as reported above.

F18 2016 World Championships, 28th October to 4th November. We are holding the World Championships in Argentina later this year. We are thrilled to be going down to Buenos Aires, their sailors have travelled and supported many events. We know that we will have a great regatta, they have real enthusiasm and the regatta is be hosted by a very experienced Club. They have a growing fleet and we want to support them.  Notice of Race is published on the IF18CA website. Would ALL NCA’s please discuss their container movements and support, and let us know so that we can get the momentum building even more. I know that there have been discussions in US, and Holland about containers, and I have an enquiry from Italy this week, I do understand that many will have their own contacts. However Steve Flanklyn of Peters and May has offered all help. Peters and May are a large operation especially equipped to handle boats including Olympics and other large regattas. Contact Steve on steve@petersandmay.com  Please visit the great new F18 Worlds 2016 website via our IF18CA website.

F18 2016 European Championships, 5th to 13th July, will be hosted by our friends in Brest, again the NoR is published on the website, so please make arrangements and get your entry in. Registration now open, so take advantage of the Early Bird fee.

F18 2017 World Championships will be back in Europe and we all look forward to going to Denmark, this country has a great sailing history and we are pleased to be going. Details are developing on our website.

F18 2018 World Championships will move across to the US as mentioned above.

F18 2018 Europeans, Council will make their final decisions after prospectus has been prepared by Italy and Spain. We ask for these by May this summer so that Council members can have adequate time to discuss and the decision will be taken in Brest during 2016 Europeans.

2016 Sailing events
I ask AGAIN will all NCA’s PLEASE let us know your planned sailing activity. 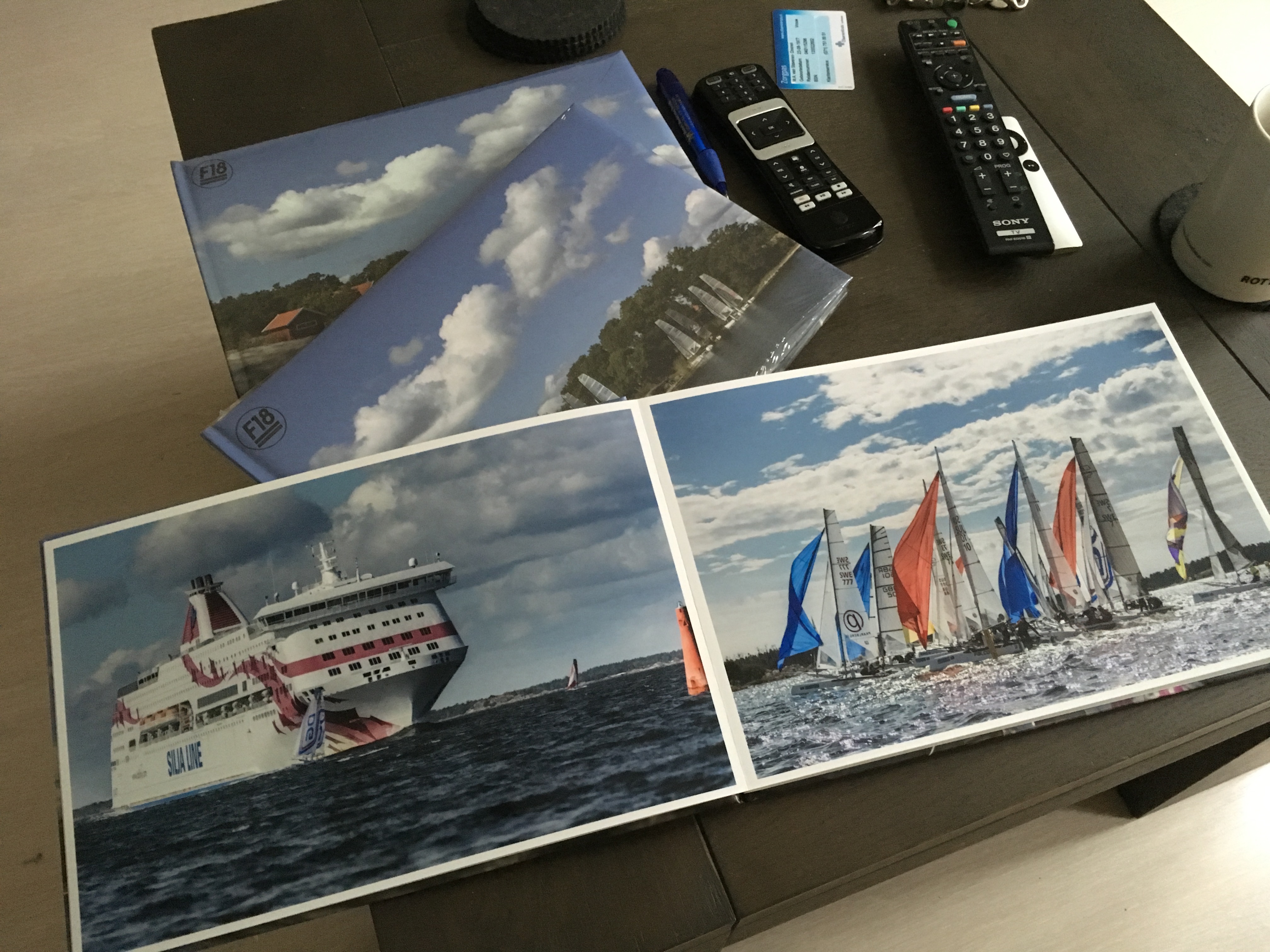 Jasper created a photobook of the Swedish Archipelago and it has brought serious positive comment. We are discussing ways of bringing this book to the market. Lars tells us that it has been very successful in helping to attract sponsors.

Jasper wrote to Lars, “I’m also happy the book works as marketing material. It’s very important to have something printed to show people and take more time to look at the photos instead of online slideshows”.

Jasper also tells us that he has invested in a gyro stabilised video camera, so we can have more high speed action on our IF18CA website. Great Work!! Thanks for the support!

I ask every year but it is important to support our great Class and showing loyalty by wearing clothing and goodies is the best way of demonstrating that loyalty to others in your Club. Also due to the sponsorship of our suppliers, it brings in much needed money to the Class. Support PLEASE and visit both webshops.

This is an exciting time, let’s all redouble our efforts and make 2016 a year to remember.