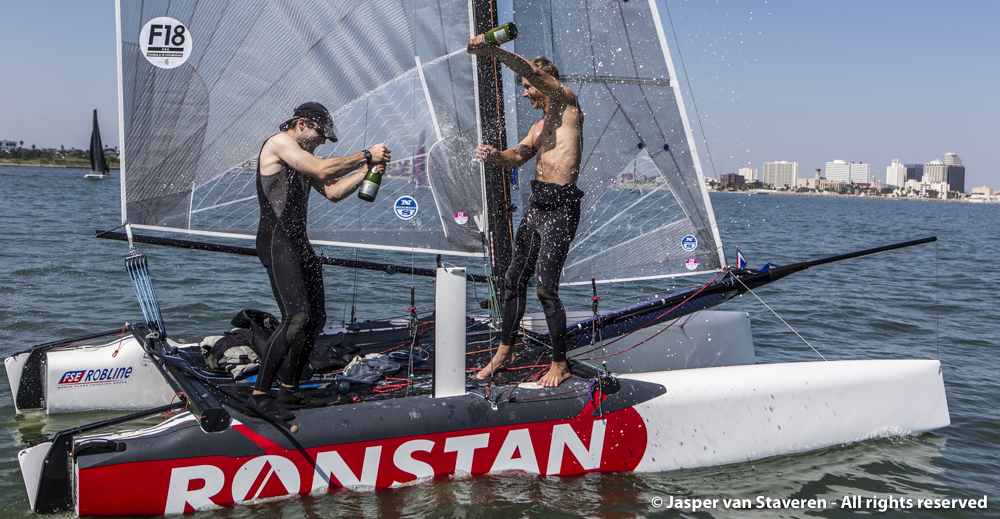 While Michael Easton is sailing his Olympic campaign in Denmark  Tripp Burd is preparing to come to Europe. These U.S. 2014 Champs confirmed that they will be at the Worlds in Kiel on their Falcon as well. That makes 10 teams from the USA to join a Formula 18 Worlds held outside their own country. Never before so may teams from the USA lined up before.

We had a chat with Mike Easton and Tripp Burd. Both are very excited to be able to be at the F18 Worlds in Kiel. Mike Easton: “It’ll be our first F18 worlds since Long Beach in 2012, so we’re looking forward to putting our skills to the test against the world’s best on our Falcon F18! We’ve found it fast in U.S. championships and are looking forward to lining up against the world’s best. Getting to the event this year was a bit of a challenge for us, with the crew and boat logistics. We wouldn’t be doing the event without the help of Falcon Marine, Gill at the Boatshop.be, Ronstan, Robline and North Sails. Logistically for me, the N17 World Championship is the week before with zero rest days between, so it’s going to be a lot of competitive sailing all in a row. For a while I was uncertain about whether Tripp would make it either, between the 750 mile Race to Alaska on his modified ARC22 and his job schedule.”

They’re hoping to shake the rust off for a top finish at the Worlds. But since they haven’t sailed together for months, they’re just going to have as much fun as they can while sending it in some great Kiel breeze. “Going up against 200 teams will be awesome! This will be the largest fleet we’ve seen come together in the 10 years that we’ve been in the class. Especially of note is the number of American teams making the trip. The USF18 has been steadily growing for years, so it’s awesome that this will be the US’s biggest international presence. We can’t wait!”, says Easton.