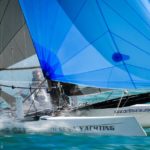 Last weekend the Formula18 national regatta called “Internazionali d’Italia” took place, as it is also open to foreign crews. Hosting in the prestigious Campione Univela Club, which proved to be up to date with the race committee to handle every situation. On land with assistance, hospitality and daily events in the water with quick and winning decisions.

Friday departure after registration and at 14 o’clock for the crews who have reached the high Garda lake. A single race disputed with “Ora” poor and after an “all ground” with intelligence flag on H, regattas finished. Press bulletin board to inform the fleet that Saturday would have gone in the water very soon. 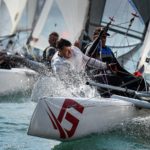 Saturday the siren of the start of the first race is at 8 o’clock with a Peler stretched up to 20 knots and “sail paradise” at top speed. Three morning race and with the unanimous consent we return to the water at 2 pm to try a fourth day trial. Turnaround, but with little wind.

On Sunday another morning start and another four race for the athletes in the water to compete, with an initial Peler wind of 20 knots to fall in the fourth round, but always with a double trapeze.

Mazzucchi-Lisignoli is always on pole from day one and take home the trophee, in second place Fantasia-Recalcati, third on equal points Viganò-Viganò. As tradition is the fourth step for the tuscan Radman-Cioni and the fifth Wunderle brothers from Germany being the first foreign crew in the rankings. To note Stroebel-Morris pair from USA ranked 7th.

Successful demonstration at best, completed program and lots of fun on the ground with the beer party. Formula 18 is this, technique, passion, competitive spirit and lots of fun!

Next appointment not to miss the Italian Championship from 29 to 2 September in Gaeta in one of the most prestigious local clubs the Yacht Club Gaeta EVS – Nautical Base Flavio Gioia and the Club Nautico Gaeta. 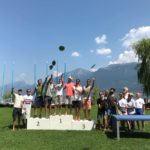 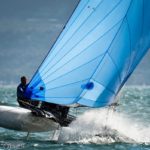 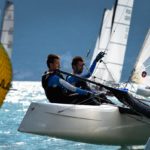 News and info on www.formula18.it