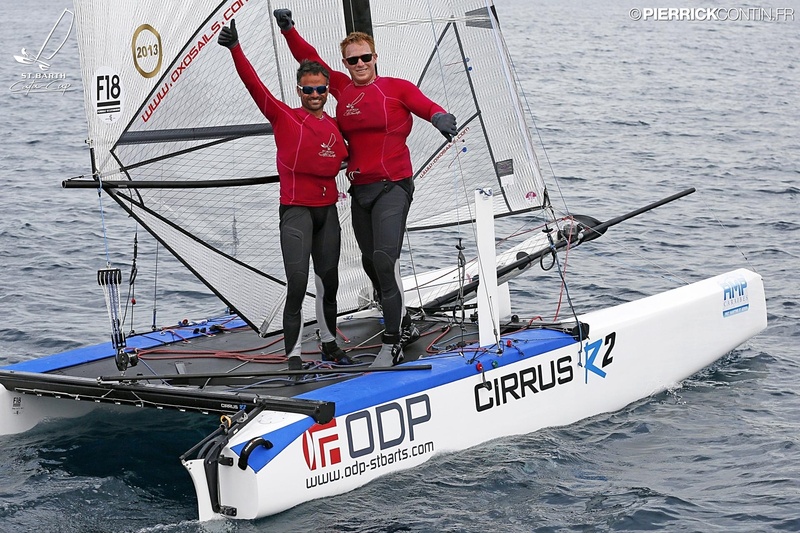 Saturday November 18th the third day of the St. Barth Cata-Cup was sailed in light weather conditions. Nevertheless the race committee succeeded to start two great races: a raid between Toc Vert, Fourchue and Bœuf, then a slightly smaller one between Green Toc and the Grenadines. Despite the very uncertain conditions, some managed to keep good boat speed like Franck Cammas and Matthieu Vandame. With a third position in the first race and a win in the second race they had a superb day.Thanks to these results they are now leading the overall scoreboard. The difference with the Greek team Iordanis Pachalidis/Kontantinos Trigkonis is only 2 points so many things still can happen on the last day. Belgiums Patrick Demesmaeker/Olivier Gagliani are third overall.

The inhabitants of St. Barts say the southwesterly wind is very rare on the island. It is caused by an air flow in this sector of the Antilles which settled this Saturday. Very light and unstable winds between 5 and 8 knots as a result. Nevertheless two races were held. The first race, a long 18 mile raid, was launched at 10 o’clock. A bit too eager to battle, Franck Cammas and Matthieu Vandame (ODP 1) were called to order and had to do a restart. “We can not say that we started in the best situation”, said the skipper who managed to progressively climb the fleet to finally take the third place. “Fortunately the race was long. We were pretty fast, but we also took advantage of the fact that being behind. We took over boat after boat, and work our way up to the front of the fleet”, Cammas tells. Same observation on the side of Enrique Figueroa (Team Off Course Management). “Watching the guys in front, we could see their mistakes and avoid doing the same”, tells the Puerto Rican who won the first race on his 2013 build Nacra. 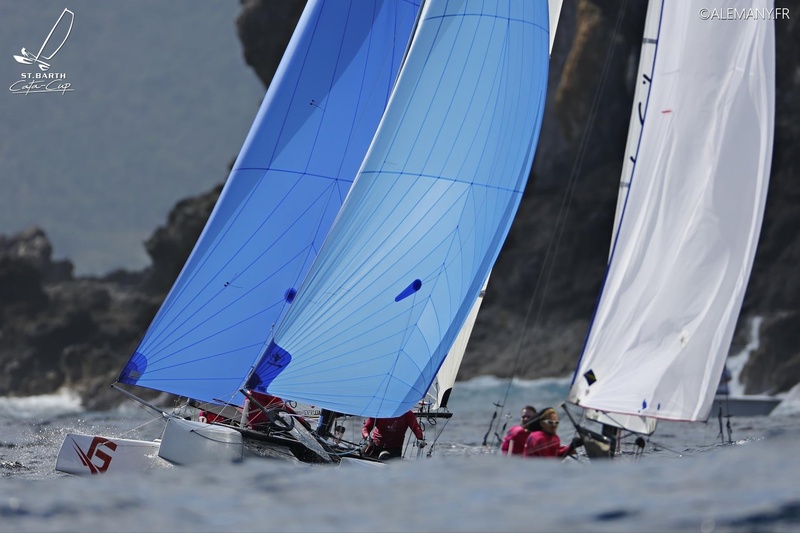 The Game Continues To Change
No matter what happens—you can never tell what’s going to happen! Among those who have seen their fortunes fall and rise this week are Emmanuel Boulogne and Tanguy Kervyn (Team St Barth Assurances). Having lost their spinnaker in the first race, they were forced to abandon and they plummeted in the ratings. Yet these talented young men have taken care of business and had a pretty good day (finishing in eighth and second place) “This morning, we had a hard time, but this afternoon we were really in touch with what has happening out on the water,” points out Emmanuel, who is getting back in the groove with his teammate (as they hadn’t sailed together in six years), and who is mastering the new Deck-Sweeper sails little by little. “We have started to find little tricks, it’s great,” adds the winner of the very first St. Barth Cata-Cup, and who let the last race almost from beginning to end before falling behind Franck Cammas and Matthieu Vandam e, while sailing full out with their spinnaker unfurled. “We didn’t think we would pass them. We had tried once without success. But then in a calmer zone we took a risk and it paid off,” explains Cammas, who is pleased with his action. And he should be, as it allowed him to kill two birds with one stone: first to win the Prix St-Barth Assurances – Allianz, and secondly, to move up to first place in the provisional standings after four races. “Nothing is won yet. The Greeks are just two points behind us. We need to keep an eye on them. We know they sail fast, they don’t make many errors, and it won’t be easy to stay ahead in light winds,” warns the helmsman of ODP 1. “At least three or four boats can still win. It will be very close. The battle will be intense, but that’s good, as that’s why we are here,” concludes Iordanis Paschalidis. 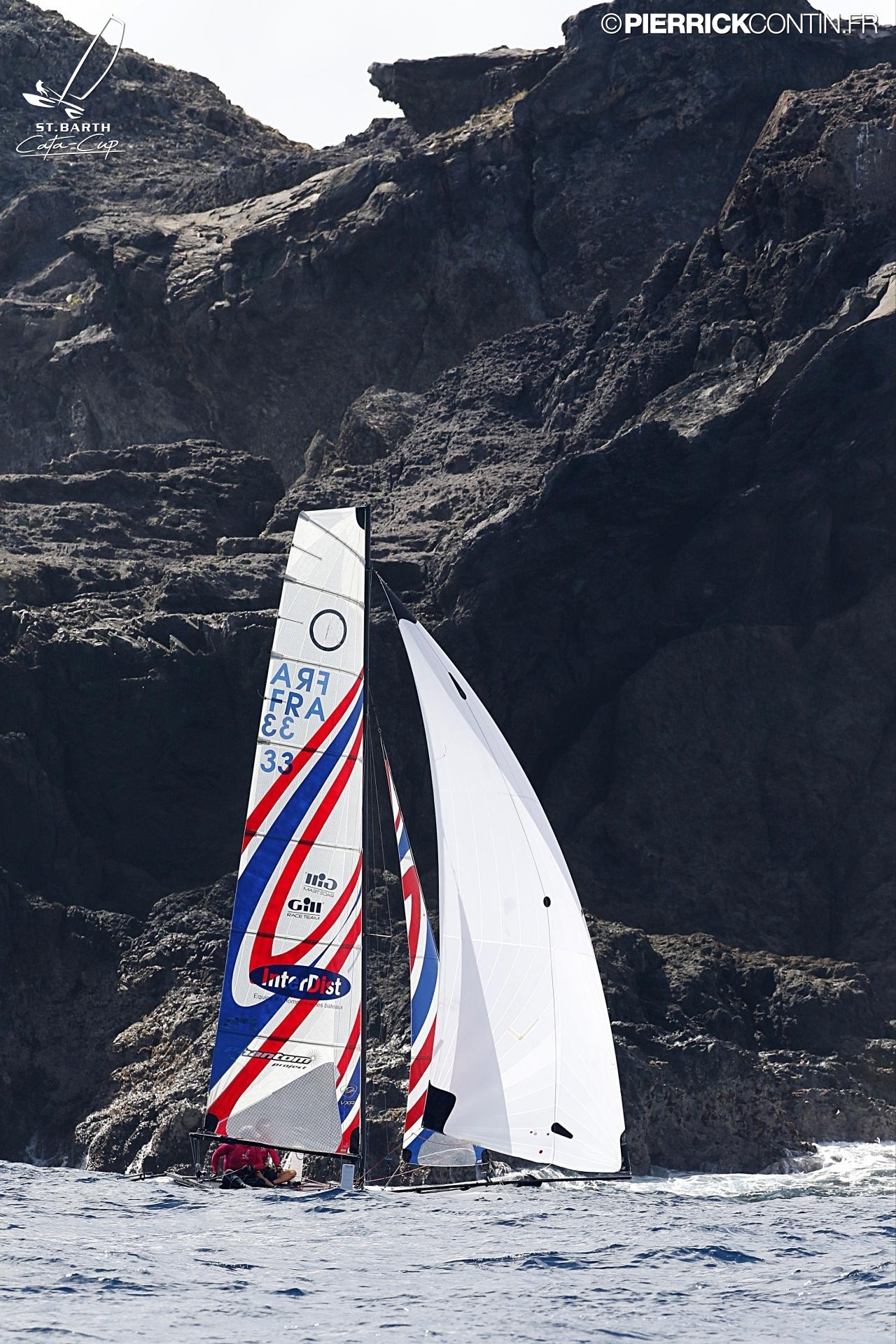 Maxime Loiselle, team Marché U: “When there is no wind it’s often very difficult. Especially since we are (in Quebec) not used to such hot air. The first race this morning was long. We expected a shorter course this afternoon but that was not the case. Anyway… we had fun! We are relatively satisfied with our day. We managed to correct a few things and we start better each time. We think we can be somewhere between 10th-12th overall in the standings. We hope to succeed in concretizing.“

François Carro, team Gill: “In the first race, we stayed 7 or 8th during the first hour of the race, but by the time we reached Fourchue Island, we lost a lot because there was no wind at all. The front of the fleet took of and we were stuck in the pack. It was a little hard for morale, especially that then the up wind course to Bœuf was very long.”

Pierre Arbona, team AMC: “The day was tough. We had bad starts and after that big troubles coming back. On the first run we managed to limit the impact. However, in the second race it was catastrophic because we never really got into the game. Of course, tonight we are a little disappointed but we hope to be able to grab a few places tomorrow. It will be possible if there is wind, but it will be complicated: we have an old boat and we are heavy.“

Full results after day 3 can be found here.