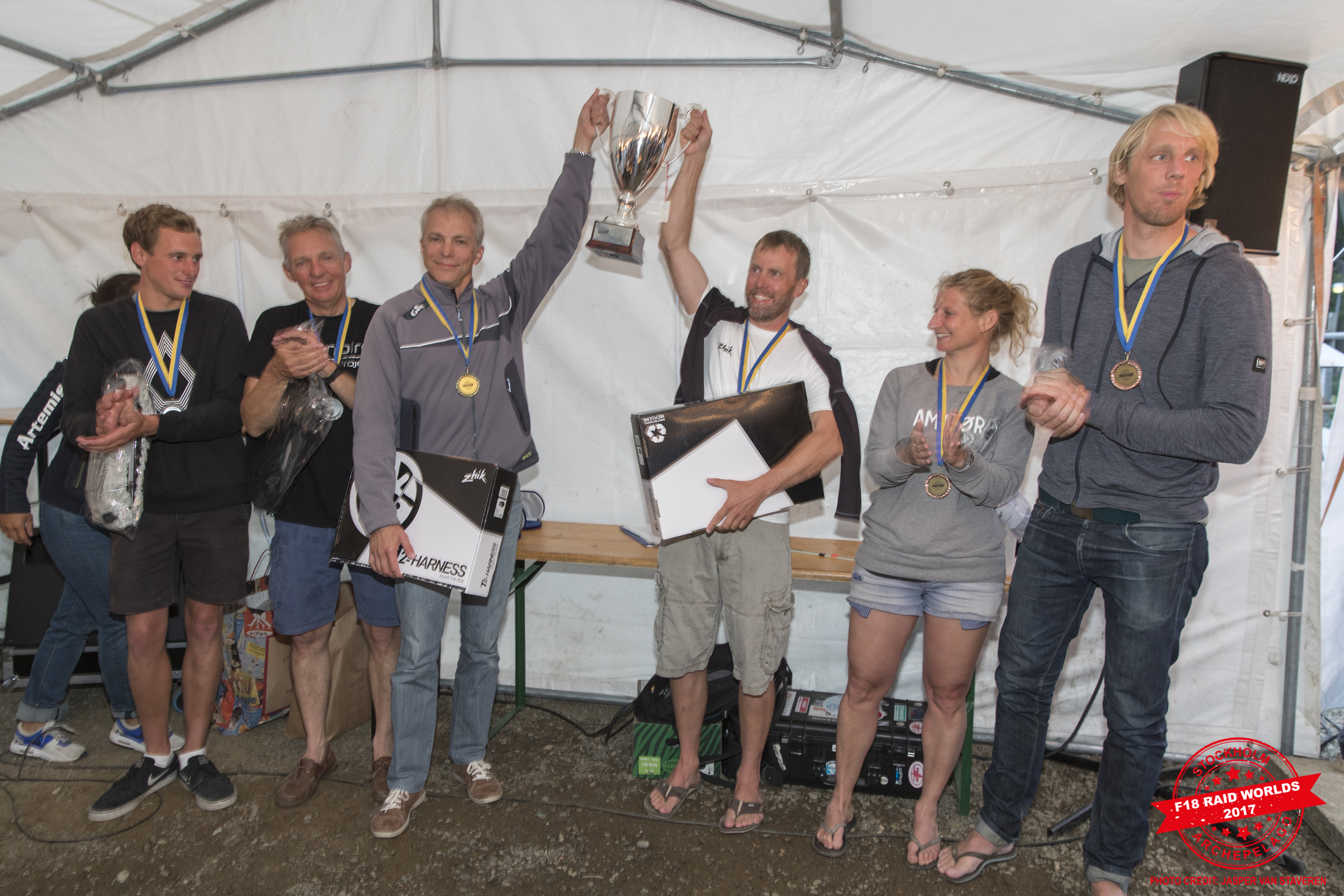 Four days of hardcore sailing in very tough conditions,…that’s what the F18 Raid Worlds in the Stockholm Archipelo is! 27 Teams from 7 different countries joined this Raid and attracted 6 mixed teams. For a long time William Sunnucks & Freddie White (GBR) were leading, but after day 3 this changed. Local Swedish heroes Leff Dahl & Roger Bodén made the difference on the 3rd day in the big waves of the Baltic Sea. On the last day Sunnucks/White tried everything they could and were waiting for a miracle that didn’t come. Dutchies Elke Delnooz & Jeroen van Leeuwen became 3rd overall after daily battles Frederik Karsson & Niklas Nordblom.

Winners Leff Dahl and Roger Bodén: “After many years of practice in this fantastic event format this was a prize that we still aiming for. We feel extremly happy to win the Formula 18 Raid Worlds! We had some extremely close battles with William Sunnucks and Freddie White. Whatever we did… they always showed up right on our tail putting on pressure at the very end of many legs. Also when we were behind them we had to pass them often with different & tricky navigation in the rocky environment. This was a real match between us where we were lucky sometimes. I’m sure they will be back and we are looking forward to that. They are really great sailors and are a formidable team.” 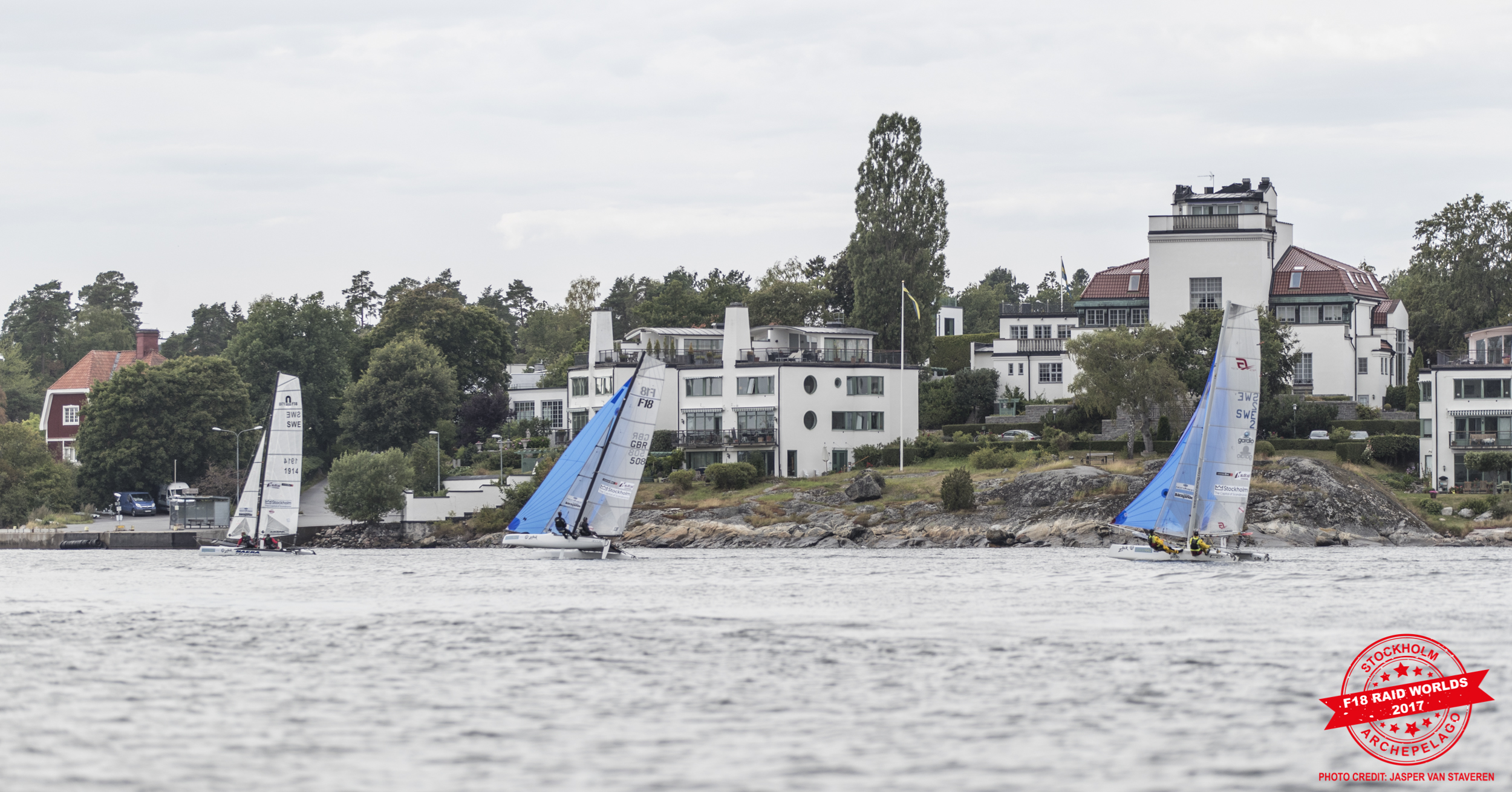 “I have some unfinished business here” Sunnucks tells with a smile after the finish back in Stockholm. “We came with one goal: to win. But Leff and Roger did very well. Unfortunately, we had some damage on our dagger board after we hit a rock and lost valuable points. So next year we’ll be back, we want to win this race at least once.”

Many sailors have been waiting a whole year to be part of this event. After many up & downwind races it was time to explore the Archipelago again. This Raid is very famous because you can’t sail it without GPS and a chart. The Archipelago is an area of 36.000 rocks and islands where the catsailors need to navigate through. Lars Linder tells: “This time we’ve been to the outskirts of the Archipelago where no Raid ever has sailed! For example, we have sailed all the way to the ‘Swedish Highlands’ Svenska Högarna, a very remote place where you can only get a couple of moments during the year. This area is so remote and nature is so violent that the family who lives & works there (for research purposes) can only get of the island a few times a year. In winter, it’s even impossible because of the ice and huge/dangerous waves. But every edition in the Archipelago is special in its way. You’ll never have the same checkpoints and you neither will have the same weather conditions. Each time it’s an unique edition! Thanks to the good weather we were able to sail long legs as planned and still have enough time for proper lunch breaks and enjoying the Archipelago itself.”

Fantastic organized F18 Raid
It was a huge job to organize a F18 Raid Worlds, preparations took over 1,5 year. It starts with booking the basecamps. In August, the Archipelago is very popular for weddings and holiday, so have camps for 75+ people is more than necessary. This year Lars Linder choose to let someone else manage all operations during the Raid. It was well deserved that Rasmus Johnsson got a big applause from the sailors at the prize giving ceremony for all the work he and his team put into this Raid. “I couldn’t have done it without Rasmus! It was amazing to see how he managed the Raid: having the sauna’s ready, luggage ready to be picked, arranged cold a cold beer when sailors entered the beach, collecting the live trackers, setup dinner and breakfast, distribution of the cabin keys so everyone immediately can fresh up… and much much more! Big thumbs up for this guy!!!” Linder tells with a big smile.

Also, the foreign sailors enjoyed the Raid. International Formula 18 Vice President Ad Noordzij: ”It’s so beautiful here to sail… why have I not been here before….?!? I heard about the event, it’s beauty…but this…. I personally going to try to get the Dutchies lined up to come here next year!”. 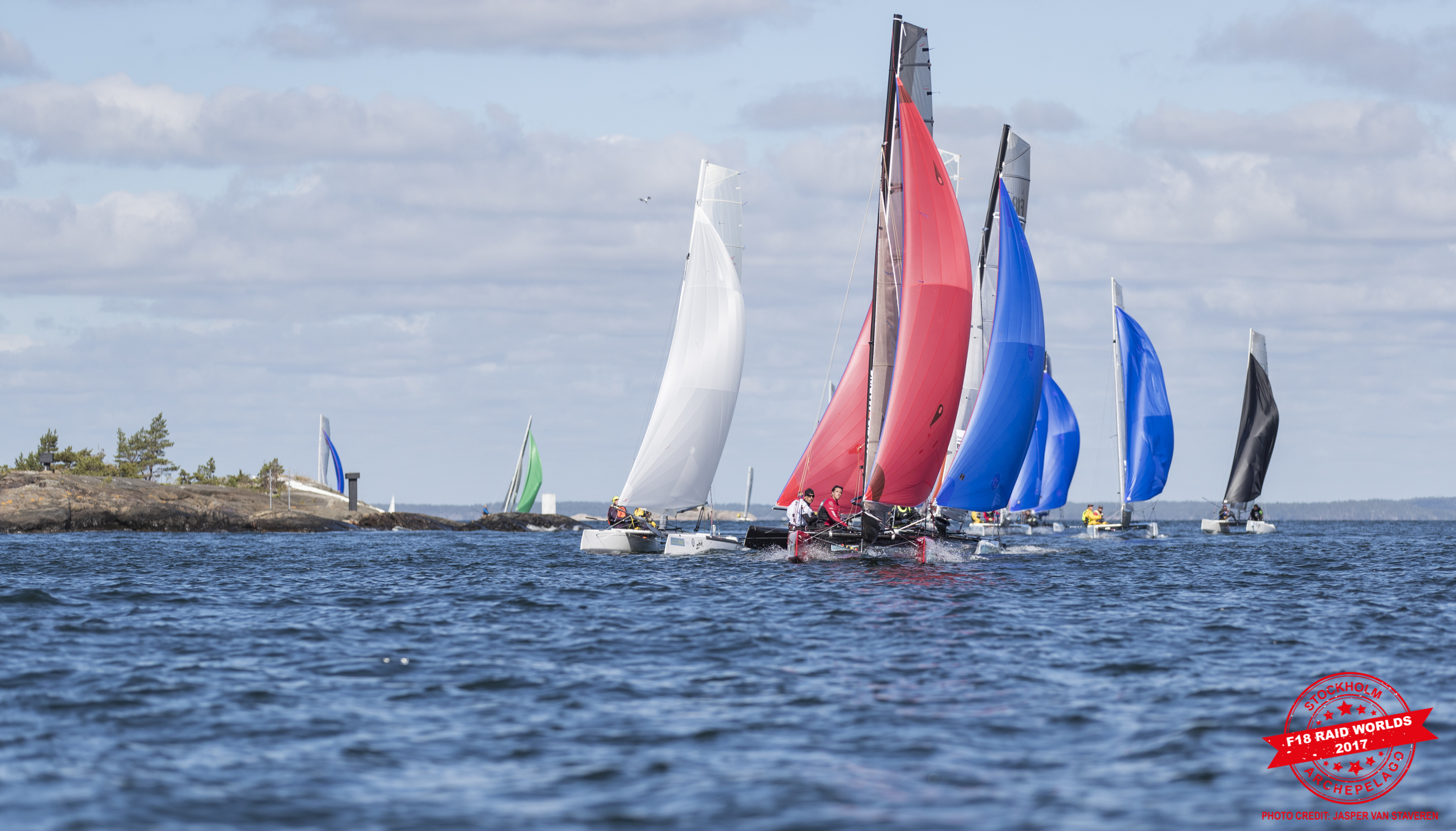 Stockholm Archipelago Raid 2018
The next edition of the Stockholm Archipelago Raid is already in progress. Linder: “We asked various basecamps to do their best proposal for hosting us during the 4 days of sailing. We aim to have the event somewhere mid-August 2018, as soon as we know the dates we’ll let you know on the official website. The maximum will be 30 teams, so make sure you claim your slot as soon as the registration opens!”

Leff Dahl and Roger Bodén are now members of the Formula 18 Hall of Fame.

More information can be found on the official Stockholm Archipelago Raid website. Daily photos & updates on the Event Facebook Page. Photos are available in the daily albums, check them here. Videos produced by Hamnen.se can be watched here: day 1, day 2, day 3 and day 4.