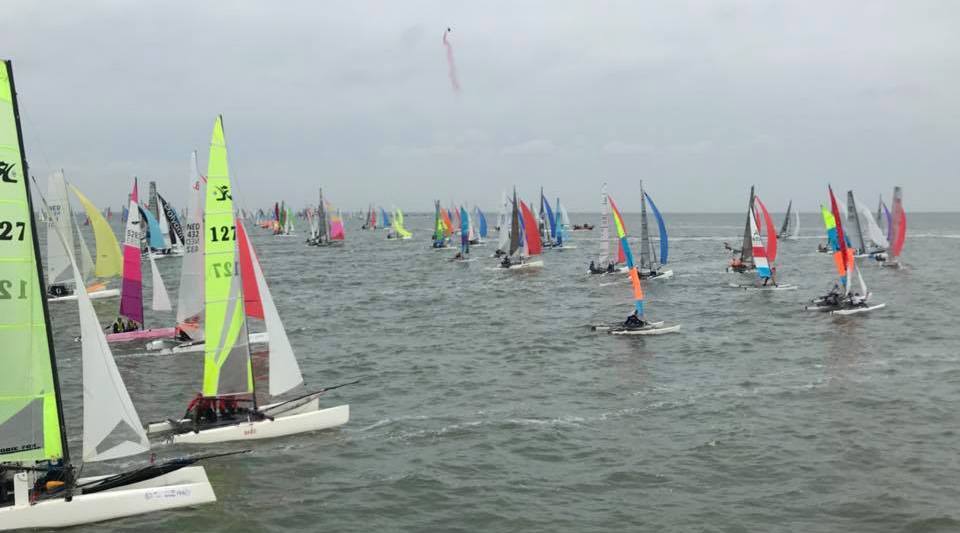 271 cats at the start, a gentle 3 beaufort of breeze and ~19 degrees. These were the ingredients for the 41th edition of the Round Texel race 2018. At 09:30 the first boats were going out on the water and at 10:10 the helicopter passing the line made it official. In 3 hours, 12 minutes and 56 seconds father & son Grant and Adam Piggott  (GBR)on their Windrush EDGE F18 passed the finishline as first Formula 18 catamaran. They are the official overallwinners of the Round Texel race 2018 having their names added to the Hall of Fame. 2nd overall are Dutchies Hans & Marius van Dam, 3rd Simon Northrop & Caleb Cooper (GBR) 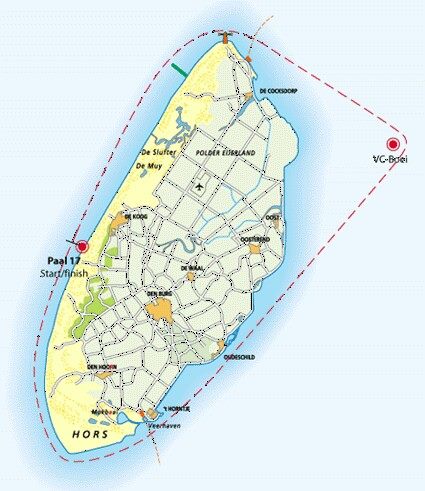 A start under spinaker made it a spectaculair view for all spectators on the beach at Paal 17. The foiling boats were out of sight downwind in no time followed by the traditional cats with and without spinakers. The first checkpoint is the lighthouse in the northern part of the island. It’s always a spectaculair view to see the big fleet coming towards the beach where the water is already pretty shallow. Spectators are almost able to touch the boats at the point. When the boats passed the lighthouse they set course to the next checkpoint, the VC mark. The water between the other island (Vlieland and Texel) gets very shallow in no time, so this is always one of the most tricky parts of the race. Having your dagger board sticking to deep in the water could let you run on the ground and pitchpole.

Champ Grant Piggot: “We had a great race and really nice to see there were two father/son boats battling for the lead, I think this says a lot about the F18 class! The Round Texel race is also a good test of navigation and using the tide well. We are very pleased that we’ve won this race I sailed in 1985 for the first time. It really gives me a kick to sail this race with my son and, of course, with the sails I’ve made myself.”

Dutchies Hans and Marius van Dam (Goodall C2 F18), also father & son, had a good start and were in a continuous battle with the Brits (Piggot and Northrop). “We had a very good start at Paal 17 and had to fight for each inch on the course. After the lighthouse on the way to the VC mark we were in persuit and managed to take the ‘F18 lead’ from there. All the way upwind untill the Molengat (the most southern point of Texel), we were able to keep the lead. Unfortunately we’re a pretty light team and had to drop our spinaker to make it to the next mark. The Piggott’s, who have more weight, made it with their kite up to that mark and went full throttle to the finish. We came close but not enough to pass them before the finish. But…. we’re very happy with our result to be 2nd overall in the F18 class this edition!”, tells helm Hans van Dam.

The Race Committee also looks back to a good Round Texel race. Race Officier Menno Vercouteren: “We had a good and safe edition of the Round Texel race. After a clean start, except for only one boat who started too early, the whole fleet was away by the book. The Van Dam’s had a very very VERY sharp start, I think they were less than a meter before the startline when we dropped the flag. We were happy that the wind conditions were better than predicted so all sailors were able to make it in time to the next buoy or gate. Of course for the F18 class it was really nice to see that the overall podium was claimed by Formula 18 catamarans. We are already looking forward to the 42nd edition of Round Texel on 22th June 2019.”