Looking for one bullet since the beginning of the Raid, British team skipped by William Sunnucks showed today he was still competing for final win by finishing fourth leg from Fort-de-France to Sainte-Anne in first position.

One more great day sailing in Martinique. After 11:00 start, competitors attained Diamond Rock before noon. Swaping from close tack to reaching between marks in front Diamond Rock, British pair Sunnucks-White took the lead just ahead locals Giacometti-Ivaldi, before aiming to Sainte-Anne, quickly gaining a large advance likely to secure the win of the day. At the end, the Brits won with panache, beating Giacometti-Ivaldi team by 7 minutes.

No change in provisional ranking, but time gaps are dramatically shrinking, with only 1 minute and 58 seconds between the leaders and the third ranked team (1st Boulogne-Boulogne, 2nd Dutreux-Cocaud and 3rd Sunnuchs-White).

William Sunnucks and Freddie White, winners of the day :

” We won, so it was a good day ! One more great sailing time. Pretty good speed to go off Fort-de-France Bay. But crossing Cape Salomon, we faced a reverse wind flow compared to what we got until that moment. We entered a rather volatile system. You could go full speed and then be stuck any minute. We reached Diamond Rock in third position, where a rise boosted us one place ahead. Afterwards, we sailed close to the shore, and then we got the lead up to the end of the race.

On provisional ranking, we are not that far from the leaders anymore, time gaps being pretty close now. It is our third attempt, and until now we just missed victory by a hair, finishing second and third. So we would consider it would be our turn this year ! “

Mike Giacometti and Franck Ivaldi, second of the day : 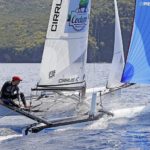 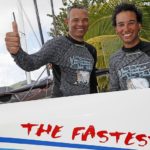 ” We try hard from the very beginning, exploiting a good wind pressure up to Anses d’Arlet. Afterwards, things turned more complicated, and we slowed down, being caught by our followers. Then wind started playing yoyo. Same at Diamond Rock, a very tricky situation as it was necessary to move away from normal route to find the wind, and we did managed this pretty well. We caught up the leading group, and we stayed in contact up to the end, finishing second. We progressed on provisional ranking, but everything could still happen, and we will have to seriously fight to stay within the top teams.”