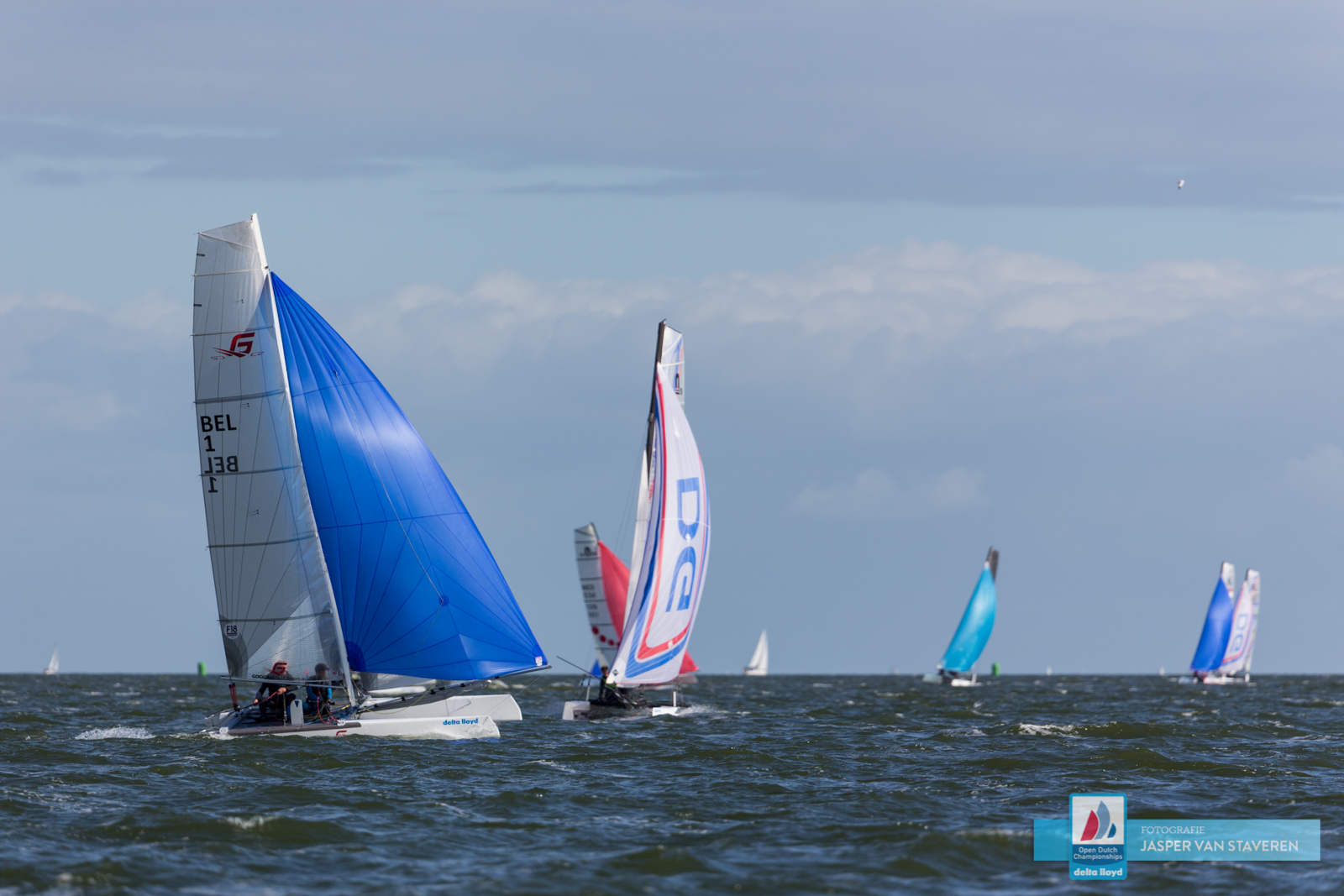 Last weekend September 19-20th in Medemblik (the Netherlands) the Belgium Formula 18 sailors Patrick Demesmacker and Gilles Tas surprised everyone at the Delta Lloyd Open Dutch Championship 2015. With four poles and three 2nd postions they managed to keep the Dutchies away from the highest step on the podium and it’s also the first time a Belgium team wins this event! Zeekant/Begemann were their only rivals for the golden medal, but with a gap of only 2 points they took silver back home. The ‘Van Dammetjes‘ (father and son) ended up third and took the bronze medal back home.

Conditions were perfect for all sailors: between 4-5 beaufort during the whole weekend and mostly sunny conditions. For a change the Formula 18 class was sailing further away from Medemblik than they usually do. Previous years the course was pretty close to the shore, this time they were in the same course with the Melges 24 and Yngling and more on the open water. More breeze, more waves, but….also had to wait much longer before the other fleets ‘finally finished’. “The water and air temperature is pretty cold… and we sometimes had to wait for 40 minutes before we could do the next start. But…conditions are really good and Demesmacker is pretty hard to beat today“, tells Charly Begemann during races on the first day. And indeed, Demesmacker and Tas were a surprise. “We came to this event with no expectations at all. Just sail for fun this weekend. But after we won the first couple of races we were like… hmmmm…. maybe…. let’s go for it!“, tells the Belgium Formula 18 Chair Patrick Demesmacker with a big smile at the BBQ on Saturday.

On Sunday Zeekant/Begemann tried everything they could to beat the Belgiums and keep the trophy in the Netherlands, but without success. Constant battles between these teams ended up in favour for the Belgiums with only 2 points difference after 8 races! Father & son Van Dam ended up in third overall and kept Jorden Veenman and Frank de Waard just away from the podium. Veenman/De Waard were doing really well, but an OCS in the last race ended their podium ambitions. But, maybe the first race on Saturday was the most important misfortune of their weekend. Issues with their spinaker and tackline resulted that they had to watch almost the whole fleet to pass at the top mark…. bad luck for these topdogs!

At the prize giving we saw a proud Demesmacker & Tas on the podium holding the Dutch pennon next to their fellow Dutch F18 sailors. “It will have a very nice spot somewhere in our clubhouse in Knokke”, winked Patrick Demesmacker towards the Dutch sailors. In two weeks (October 4-5th) the Belgium Formula 18 class will have their Open Belgium Championship and many Dutch teams want to have their ‘revenge’. No doubt that they’ll be there because this event is also part of the overall Dutch F18 class prize. But… this will help to have an invasion of Dutch teams to take the Belgium trphy to the Netherlands…. let the battle begin!

Salient detail: Not only won Demesmacker senior (Patrick) the Dutch F18 nationals, but Demesmacker junior (Henri) won the Formula 16 class for the second time in a row. It’s just a matter of time before father and son will form a ‘dream team‘. Keep an eye on them!