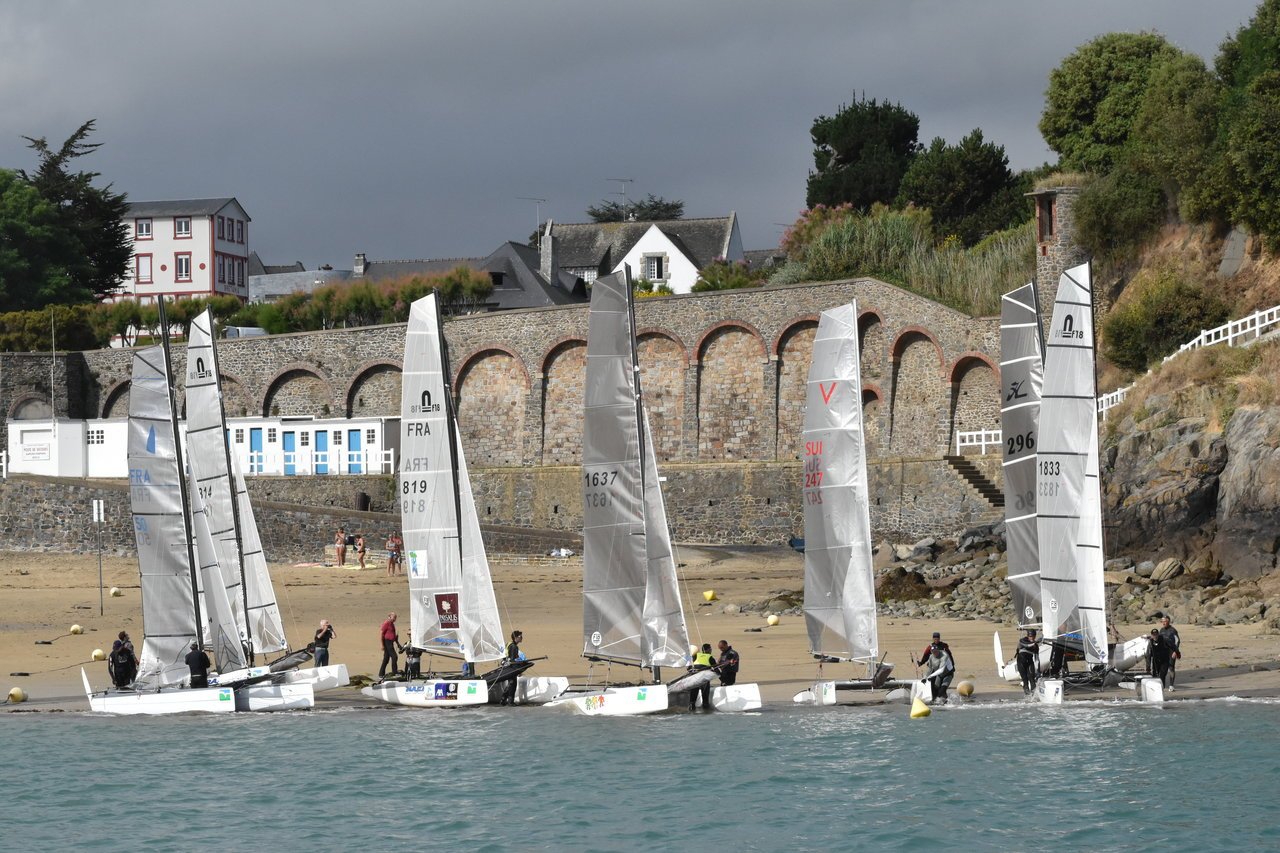 The Costarmoricaine Raid 2015 was recently held in France. Our President Olivier Bovyn was in charge and provided some really nice information about this event. Will you join next year?

On Wednesday August 5th at 11:00 the twelve catamarans went onto the water for the start of the event managed by the Erquy’s Bay Sailing Club (CVBE), well known by many F18 competitors who entered 2000 and 2010 Worlds. The trip goes along Côtes d’Armor, on North Brittany. “All the conditions were there for a good race,” tells Olivier Bovyn, President of the CVBE. “Twelve boats, it’s not so bad when you consider that this year, attendance is down because of big events such as Tour de France, leaving many teams totally exhausted after 3 weeks of intense sailing and traveling.

After the first leg, competitors arrive in Bréhat, a small paradise on earth, before reaching Perros-Guirec on the second day (rounding big Héaux de Bréhat lighthouse) and facing some big swell. From there they sail back to Saint-Quay Portrieux for a 50+ miles ride, this is the longest ride of the raid. When they arrive in Erquy again on Saturday afternoon, they’ll have their final stage on Sunday rounding the impressive Cap Fréhel and the magnificent Fort La Latte (remember The Vikings movie, 1958, starring Kirk Douglas and Tony Curtis!), before returning to Erquy.

First finishers on Wednesday were Allyson and Olivier Mousselon of CNBPP who sailed the 28 miles in 2:57.34 with a 10 knots average speed. Only 4 seconds (!) behind them were François Bellenger and Emmanuel de Bressy (CMV Saint-Brieuc) followed in 7 seconds (!) by Marc Chenais (SNO Nantes) and Alban Chamoillaux (CNBPP). Very close and tense racing! “We started with a south-south east medium wind that allowed crews to demonstrate their capabilities to ‘live on the edge’ on a spinnaker course reaching towards the Roselière mark“, explains Olivier Bovyn (President of Erquy’s Bay Sailing Club (CVBE) and als the event organizer). 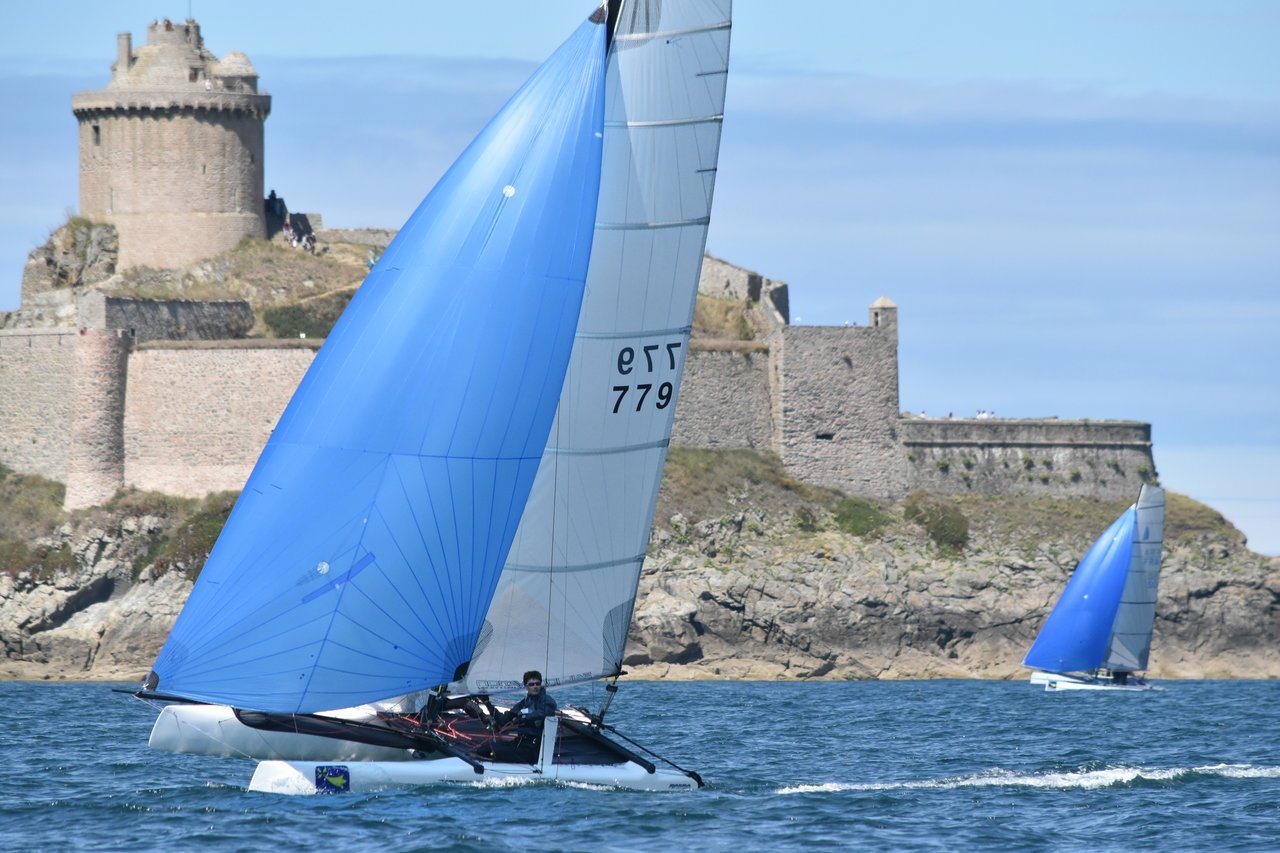 On Thursday the Costarmoricaine Raid competitors noticed it was sometimes on the edge. After a good start from Bréhat to go to Perros-Guirec, Maxime and William Lesguillier (CV Jullouville) who are two faithful participants of the event, quickly outdistanced their competitors till Loguivy, when they were preparing to drop their spinaker, their mast sundenly bent in the rough sea. Two rescue boats of the organization immediately joined them to help these unfortunate sailors to return their sails without tearing it. They were safely towed into Loguivy where Francis Ferrari (a well known dealer among Formula 18 sailors, was ready to meet them in the afternoon. He providing the unfortunate sailors a new mast, a new spinnaker and trailed the boat by road to Perros-Guirec. Thanks to this Maxime and William were able to the start on Friday morning and sail to Saint-Quay Portrieux for the longest leg of the raid.

For the rest of the fleet, “the stage ran pretty well despite light breeze and strong chop between Héauts Brehat and La Jument mark“, says the president of CVBE Olivier Bovyn. “This event has a bit of magic, as it allows experienced crews to safely discover fabulous places where they would not get the idea (or would not be allowed by Coast Guards…) to sail through.” On the sporty side, this 2015th edition of the Costarmoricaine is high level compared to previous editions. Skill level is quite high since the top five is ranked within just 10 minutes! Mark Chenais and Alban Charmoillaux (SNO Nantes) crossed the finish line after 3:37 minutes and 40 seconds of racing, followed by mixed crew Allyson and Olivier Mouselon CNBPP in 3h 40 59, and  Francois Bellenger and Emmanuel Bressy (CMV Saint Brieuc) in just 3 h 44 30.

Nerves of teams were highly tested on the third day. Starting at 11:19 in Perros-Guirec, they immediately hit the wind to drive east towards Saint Quay, their destination after a 50+ miles journey. It did not last, as the wind dropped down to become shifty caused by the clouds. Due to huge distance gaps between the leaders and the rest of the fleet, the organizers decided to make a first stop at the Vieille de Loguivy mark, and to wait for the back of the fleet. A new start at 15:30 was done to sail the second half of the leg. After the Taureau tower, one of the teams has been caught in a calm, without any possibilty to sail  anymore. Only one of the eight boats succeeded to cross the finish line within the time limit (only 30 seconds before closing time). 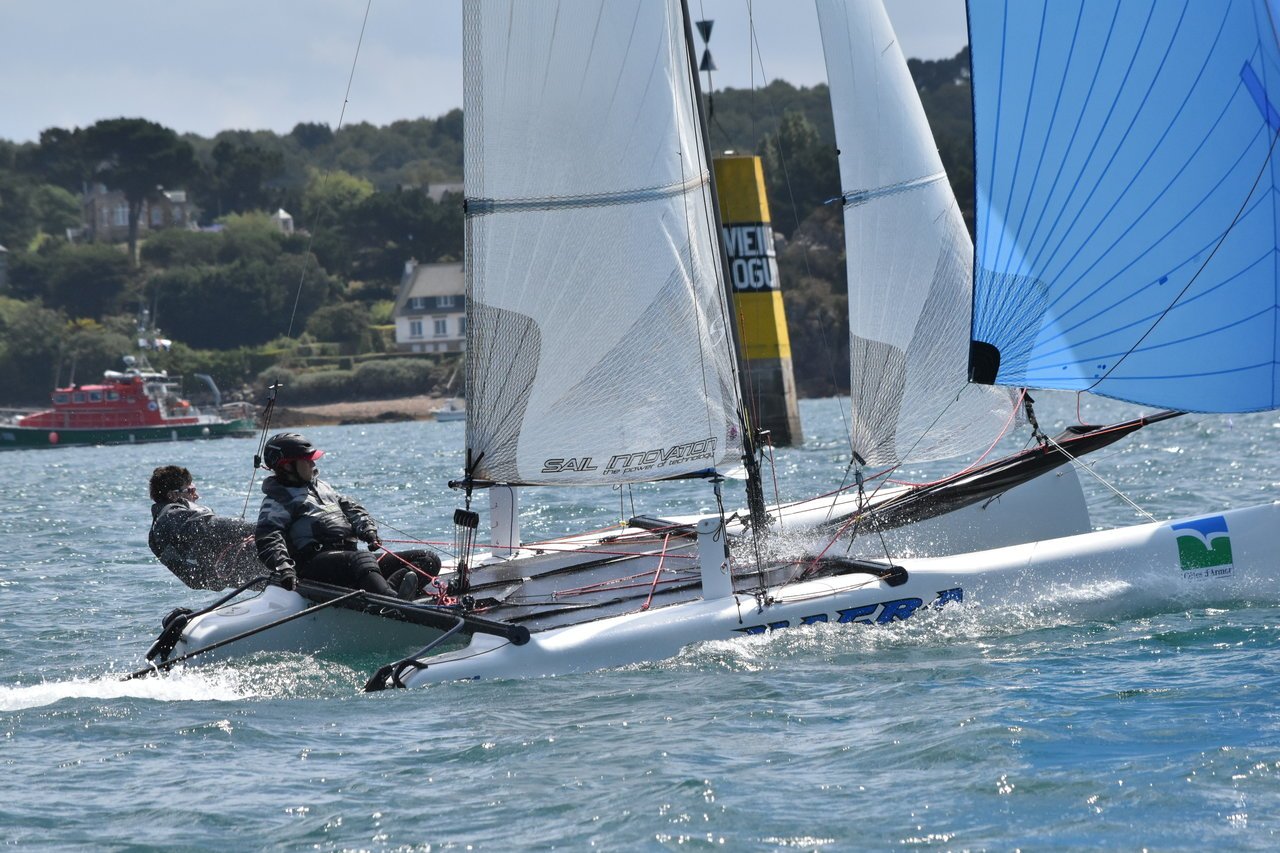 The fourth leg, 41 miles from Saint-Quay-Portrieux to Erquy likely to be eventful, was exciting. The winner for the 2015 Costarmoricaine was not decided yet, four teams still had a chance to become this years winners. The provisional leaders (Allyson and Olivier Mousselon) with a cumulative time of 16 hours and 2 seconds, demonstrated once again that in these particular weather conditions, regularity pays. They had an advantage close to 8 minutes on their direct followers (Francois Bellenger and Emmanuel Bressy (CMV Saint Brieuc), while Alexander and Augustin Masurel (CV Julouville) stood  three minutes behind. With 16 hours 20 minutes and 31 seconds, and Cedric Delphine Fleury) andshow very talented  the last two days. Especially considering that the last leg of the raid, Erquy – Cap Frehel – Fort La Latte and back, is notorious about shuffling the top 3. The 4th leg was won by Francois Bellenger and Emanuel Bressy in 4:08:30, followed by FRA 124 Cedric and Delphine Fleury in 4:10:19 and FRA 779 Allyson and Olivier Mousselon (CNBPP). “It was hard for all competitors to keep their spinnakers hoisted between Légué Buoy and Les Trois Pierres mark, the brave hearts absolutely had an advantage upon their opponents“, tells Olivier Bovyn. 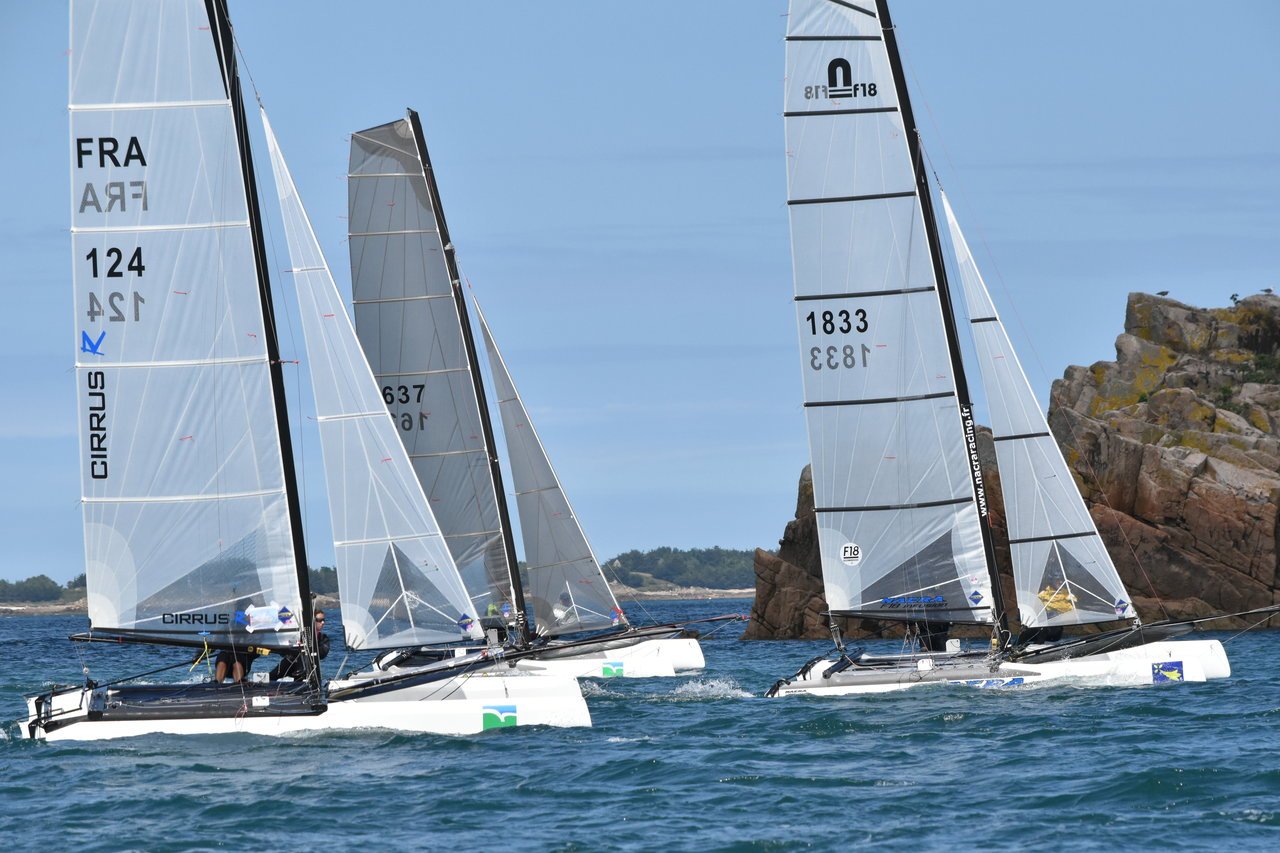 Similar to the previous days, last day was dominated by light winds, forcing competitors to deal with quite a strong current combined with some high tides North Britanny is used to ‘provide’. As expected, the final leg provided some real tension who would get the 2015 title, with just only 1 minute and 41 seconds… a less than two minutes gap after 20 hours racing! François Bellenger and Emmanuel de Bressy are the Costarmoricaine Raid 2015 winners, just in front of Olivier and Alysson Mousselon, who were the provisional leaders. Alexandre and Augustin Masurel ended up third, only 19 minutes behind. “The Costarmoricaine has been faithful to its tradition, once again the last leg was crucial,” says president of CVBE Olivier Bovyn during the prize giving and also underlines the high level of the teams. The narrow time gaps between the top 3 underlines that as well.

This Raid should be on your bucketlist as well and you’re more than welcome to join the Costarmoricaine Raid 2016. Dates are already know: from 27 to 31 july 2016. Check your agenda a sign up!