Three more superb races have been sailed today in Buenos Aires, where Pablo Völker and Juan Martin Benitez, with one more bullet, do confirm their option on 2016 F18 World Champion Title.

After a very long launching process, troubled by both Harbour traffic and North wind making the task of leaving the harbour through a narrow gate rather difficult, the whole fleet did succeeded in reaching the course area, where Race Officer “Kiko” Kundig managed to build up three back to back races, sailed on an average 15 to 18 knots wind, with no major damage to equipment, by the difference of yesterday racing. 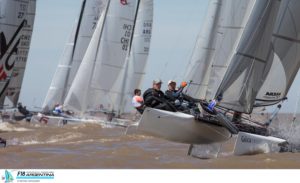 With a very consistent series today (6.0, 3.0, 1.0), Pablo Völker and Juan Martin Benitez do appear more and more as the future winners of 2016 F18 World title, and they currently only fear mast failure, the weakest point of their Phantom boat, they carefully take care of, by reinforcing mast bottom in the morning.

Cruz Gonzalez Smith and Mariano Heuser, very consistent too (3.0, 5.0, 4.0), do secure their second place in the provisional ranking, with 34.0 pts, when a group of four teams form a double tie at 48.0 and 52.0 pts, leaving Bronze totally open until the last race to be sailed tomorrow.

It is here to note the big step forward from Guatemala team Jason Hess – Nicolas Schargorodsky, 3rd with 48.0 pts, as well it is to notice the jolly good performance of Matias Buhler – Sergio Mehl, scoring 1.0, 2.0, 2.0, when they have been so unfortunate yesterday, capsizing at the last mark before finish, and being then forced to retire due to equipment problems.