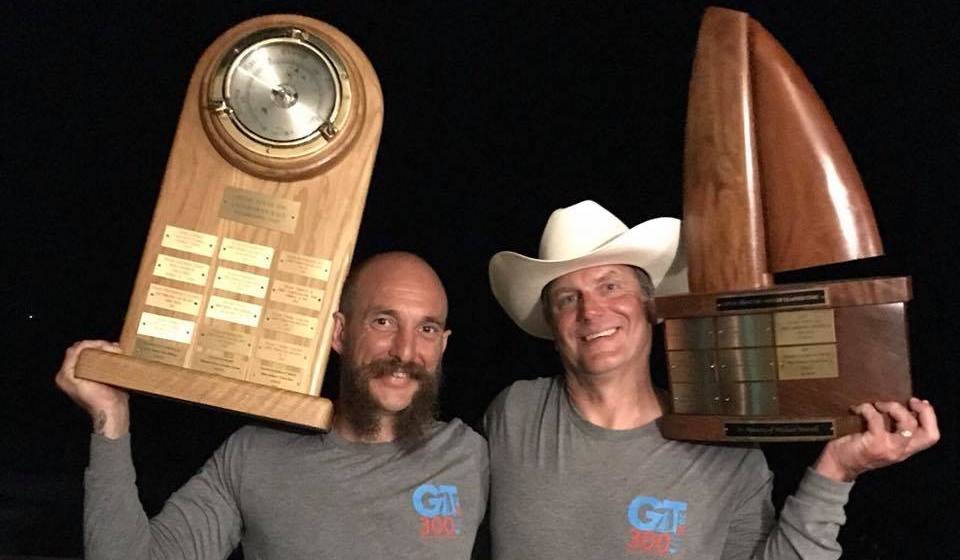 “Sometimes you have to sail 4,800 miles to win a 300 mile race.” That’s the feeling skipper Steve Piche (founder of the race) and crew Juke Ball of Team Great Texas 300 had after they won the 16th Great Texas 300 and finally have their names on the trophy as well! From 13-16 June 2018 this Long Distance race was held and has a long tradition in the Formula 18 class.

The Great Texas is known for its 4 day long distance sailing along the cost of Texas. Blue water, nice temperatures and often very good winds are the perfect combination for some nice catsailing. In 2014 the US Formula 18 Nationals were held in the same are and hosted by the Corpus Christi Yacht Club, for many US sailors this area is well known. Steve Piche makes a top 10 with highlights on a daily basis, we used this to make a summary of the event. 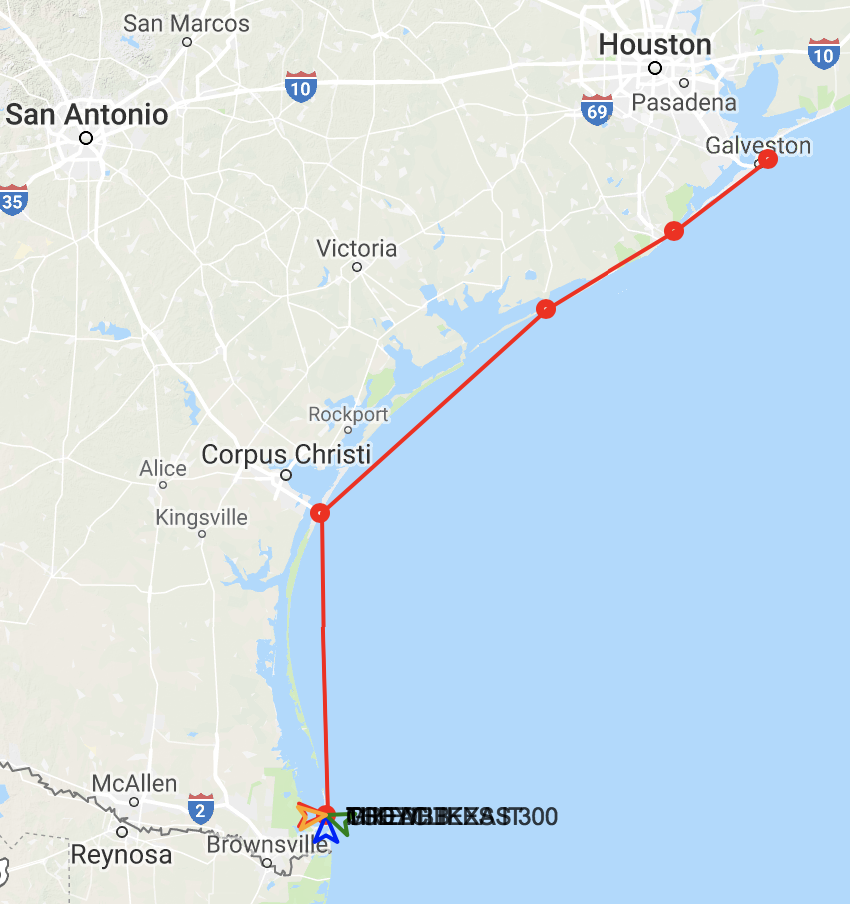 Day 1 (87 nautical miles from South Padre to Corpus Christi)
“Should we stay or should we go? That was the question that was put forward to the sailors after a two and a half hour delay of the start due to very light wind and good sized surf. Should we wait for better wind the next day or go risk it in light wind start in good size surf. Ultimately, we decided to go after the wind filled in at 4 mph straight on the beach. We choose to go. For a while, we all doubted we made the right decision. We all bobbed in the surf getting pounded by waves unable to make forward progress. It took us 10 minutes to get through the first shore break. We finally got through that and had to get through a larger second break. Eventually, we rolled the dice and locked down the rudder and dropped the daggers – a very dicey thing to do in big surf. We finally got a little forward movement in the boat and caught a lull in the big sets. We popped out of the surf at the same time as team Mikey Likes It! Chris Liked it even better as team TCDYC got clear five minutes ahead of us. We all eventually made it out. Once out, we set spins and did a rhumb line reach until the wind got too big and pushed us off the rhumb line. We were single and double trapping. After the initial wait and the pounding surf, it ended up being a great day on the course. Congratulations to Chris Green and Chris Reuwsaat for taking line honors. They got out the surf first and never gave up the lead throughout the day. It was tight racing.

Day 2 (94 nautical miles from Corpus Christi to Matagorda)
“No wind and big surf: Even tougher than yesterday was getting out of the surf today. The second break was relentless and the wind was damn near nothing. We were just boxed in and getting pounded by waves for a good half hour. Finally, the wind came up enough and we got a flat wave section and finally got through the second break. When we finally broke thought with nothing broken, Juke and Steve let out a big cheer. However, when we got out, it was very light. We were able to put up a spin and sail on a tight reach. Team Cat in the Hat popped out first, us second, team DBB third and then team TCDYC and team Mikey Likes It. There was an incident between TCDYC and Mikey Likes It in the surf and there is some discussion of redress. In the light wind, we got a back fill and Mikey Likes It was able to catch us. We also caught up with Cat in the Hat.

For the next 8 hours, the Austin boys, our team and Mikey Likes It battled it out. After catching us, Mikey Rohrer decided to drop his spin first. His plan worked and he was able to jump in front of us. I thought double trapping spin reaching was faster but Mikey proved us wrong and jumped out in front of us. Big shout out to team DBB from Casper, Wyoming. Despite tough, tough conditions, they have hung in there and finished the legs. Today, they came in after dark for the second day in a row. They had the fun of flipping 3 miles from the finish. They are seeing how big Texas really is. I simply cannot describe how physical brutal the last part of the day became today. Being trapped out for hours upon hours, constant waves hitting you, your competitor right in front of you driving you on. It just is undescribable how brutal it is. My neck hurts from holding my head up while trapping. You have a back support but no neck support. The fact that you are nearly delirious from the physical effort and still can keep going is a testament to the human spirit and competitive nature. After Mikey showed us jib reaching was the way to go, we had to chase him. We had a traveler problem that required some repair. Once that got fixed, we went gunning for them. When the wind came up, we were catching them but they were damn fast. We double trapped jib reached for hours making small dents in their lead. Eventually, they got us by 2 minutes.”

Day 3 (60 nautical miles from Matagorda to Surfside)
“Once again, we got to take on devastating surf! We had moderate wind but it was straight on shore. We all took our shots at the surf for thirty minutes just getting pounded. We could not even make it into the first break. It was impossible. We kept trying. Finally, we got pushed to the shore and noticed that the wind had shifted and picked up due to an off-shore cloud/thunderhead. We jumped on port tack and caught a few breaks with waves and got out! We cheered once again and started to sail away while everyone else was still on the beach! Mikey Likes It! flipped in the surf and ripped their main sail. TCDYC was busy fixing a rudder problem. The DBB was late to start and still fixing problems from yesterday. Cat in the Hat was also on the beach (not sure why). We took off on a single trap jib reach. We kept looking back to see if anyone was going to join us but could not see anyone going out. Eventually, we just sailed off on our own left to wonder if anyone else got off the beach. It was a nice sail. Not too brutal after some tough days. We saw huge breakers on Bryan Point.

Yesterday, there was an incident in the surf where Mikey Likes It ran into the back of TCDYC. Both teams went ashore and asked for 21 minutes of redress. After the race today, there was a hearing to determine the response from race committee. Team TCDYC was granted 21 minutes of redress. In addition, Team Mikey Likes It was given 21 minute of redress but also a 15 minute penalty. Thus 6 minutes was subtracted from their time. So, at the beginning of the day they had roughly a 5 minute lead over our Team and an 8 minute lead over TCDYC with the redress and penalty included. (I think my math is about right here but far from official.) We hit the beach with a big, big lead. It was fun. We put roughly 30 minutes on Mikey Likes It and Team TCDYC. Thus, when results show up later tonight, we will be sitting in first with something like a 20-25 minute lead over Mikey Likes It (again, if my math is right). It is a good lead but we have seen bigger leads slip away on the final day on the race course. We just need to get out there tomorrow and race hard. It would be nice to not have challenging surf just once in a start. It is nice to see all the Dash boats on the beach in Surfside! The Dashers will sail the final leg of the Great Texas but start one hour ahead of us. Thanks to Roger Howard and Joshua Grissom for organizing the Dash this year!

Day 4 (40 nautical mile from Surfside to Galveston)
“Congratulations to Team Great Texas 300!!! Team Great Texas 300, Steve Piche (oh that is me) and Juke Ball win the Great Texas! Mikey Likes It! takes second, TCDYC finishes in third, followed by Cat in the Hat and the DBB. All I can say? Yessss, yess, yess. Finally, after 16 years of sailing the race and being the bridesmaid (more seconds than I can count) we were finally the bride and took home the prize. Best quote of the day: “Sometimes you have to sail 4,800 miles to win a 300 mile race.” – Andrew Tatton in wishing me congratulations. Yes, indeed, sometimes that is what it takes. Just huge, huge recognition to Juke and his contributions to making this happen. Cat sailing is a team sport and you have to have the best skipper and crew to win! Juke just sawed on the main all day today in jib reaching conditions and would not let Mikey Likes It get away!

Keys to Success: The Great Escape off the beach yesterday, consistent speed throughout the week, no flips and no equipment breakdowns. It is hard to not break down or flip in the violent conditions we often are subjected to. It takes meticulous effort to avoid breakdowns. I spent hours and hours of effort going through the boat to try to fix any weakness in the boat prior to the race. It paid off – no breakdowns this year. Today’s sail was incredibly stressfull. Before the start, Juke and I were just super hyped up. We wanted to go. Once on the water, we were about even with Mike Rohrer when a wave washed me off the back of the boat. I dragged in the water and the boat tacked. We barely avoided a flip. We got going again and started to catch back up to Mike. However, in the middle of the course, the wind died and Mike started to sail away. We were down to 5 knots and had been doing 12 before. We bobbed around in sloppy conditions and then the wind finally filled back in and we were able to chase Mike again. When the wind died, we thought we were dead. I did not believe we had actually won until we cross the finish line. The Dashers had good wind and actually all of them with their one hour head start beat the GT boats to the finish. We were jib reaching so no spins were used today. Good job Dashers.

Thanks Billy, Terri and Trey: At the heart of the GT is Billy, our PRO, Terri, our Commodore and Trey, our safety officer. They have had a long week with some late finishes on the first three days. A big huge thanks to their hard work on a tough year.”