The Race committee had a surprise in store to kick-off the 2016 edition of the St Barth Cata Cup : the Round the Island race, usually held on the Saturday. The fleet started at 1:30 pm on the right of St-Jean Baie to leave Tortue on starboard, continuing to a race mark in Anse de Saline. The racers then circumvented a buoy in Gouverneur to head to Pain de Sucre, Bœuf, Colombier and make their way back to St-Jean. A total of 2 hours 48 minutes on the water with winds of 10 to 15 knots coming from the south that finally crowned Gurvan Bontemps and Benjamin Amiot, winners of the Design Affairs Prize. 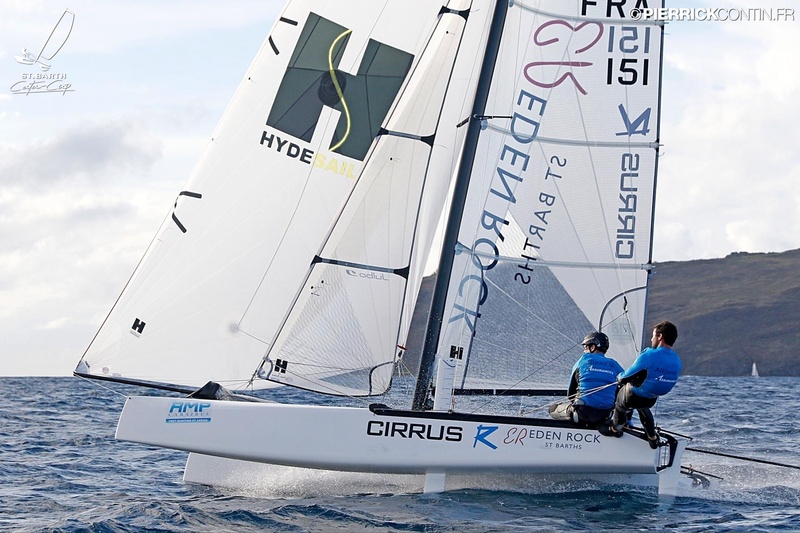 “We really fought well out there, it wasn’t easy. We had to stay in front of the fleet, the wind was changing, especially the pressure and we were quickly downwind when we reached Gustavia. The wind got us down fast under spinnaker and we were glidding well. We then circumvented Pain de Sucre, Bœuf and the buoy in Fourchue. We tried to stay ahead with high speeds while always keeping an eye on the closest boats and we crossed the finish line first”, explained helmsman Gurvan Bontemps. In addition to sailing on F18, Bontemps sails on Flying Phantom and GC32 during the season. St-Barth is a well-known playing field for him and his crewman Benjamin Amiot, who also sails on Flying Phantom, GC32, Diam24 and Ultime.

“We are really happy to have won the Round the Island race. It’s the most important race of the St Barth Cata Cup because we can double our score”, added Benjamin Amiot. “We were third at one point but then we put the spinnaker and we took the lead and kept the same position up until the end of the race.”

About Design Affairs
Design Affairs is a design firm located in Gustavia that employs architects, developers, designers and managers. For more information : http://www.design-affairs.com