After three days of sailing, training & registrations, the 47 Formula 18 teams are fready for the 10th annual St. Barth’s Cata Cup. On Thursday (Nov 16) at 2pm, they will compete in the first race of the event (the Prix Design Affairs – 001 race). The competition will be intense because the six previous winners, who are also big names in the F18 class, will join. 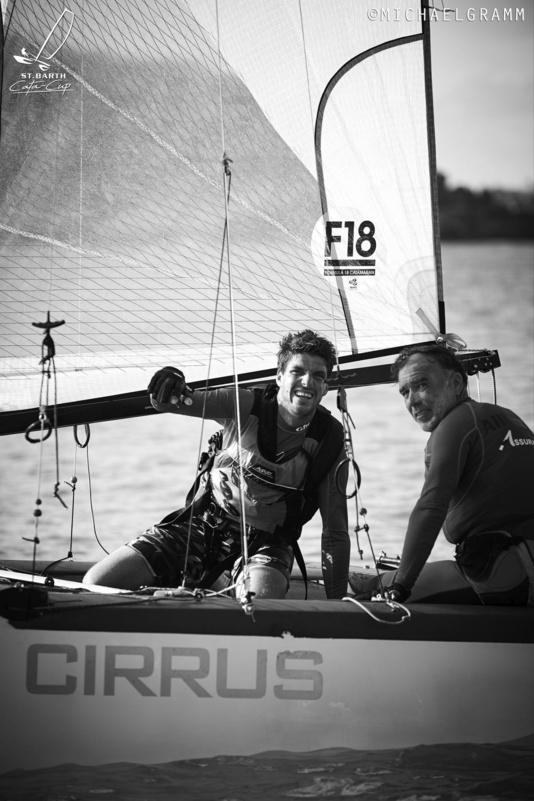 “The St. Barth Cata-Cup, for me, is a little like the long distance world championship for F18’s. The level is always incredible, and is even more this year for the 10th anniversary of the regatta,” says Orion Martin (second place in the 2015 edition and team mate of James Baeckler on Maxwell & Co), giving a quick assessment of the level of the competition. In fact, there are big champions on the entry list, starting with all the winners of the previous editions from 2008 till 2016: Dalton Tebo, Emmanuel Boulogne, Tanguy Kervyn, Enrique Figueroa, Keki Figueroa, Franck Cammas, Matthieu Vandame, Patrick Demesmaeker, Olivier Gagliani, Pierre Le Clainche, and Antoine Joubert. “We are going to put our title in play but we know it won’t be easy to win again,” tells Antoine Joubert (Design Affairs – 001) with Pierre Le Clainche, who won the regatta in 2016 the first time they participated. “Clearly, there are at least 10 boats that could win this year,” adds the French sailor from Vannes, who also knows it will be difficult to cross the finish line first on the highly technical race course around Saint Barthélemy. “This is an island with a dominant wind. As a result, there are many challenges and transition zones that have to be properly analyzed and negotiated. The team who manage to get out first is often the same one that have the best cards till the end,” explains Antoine. Antoine has primarily been racing on a Flying Phantom this season, but has also sailed well in the F18 class, notably winning Catagolfe last October with his faithful helmsman Pierre who finished second in the Run Créolia last weekend.

Too many favorites to choose 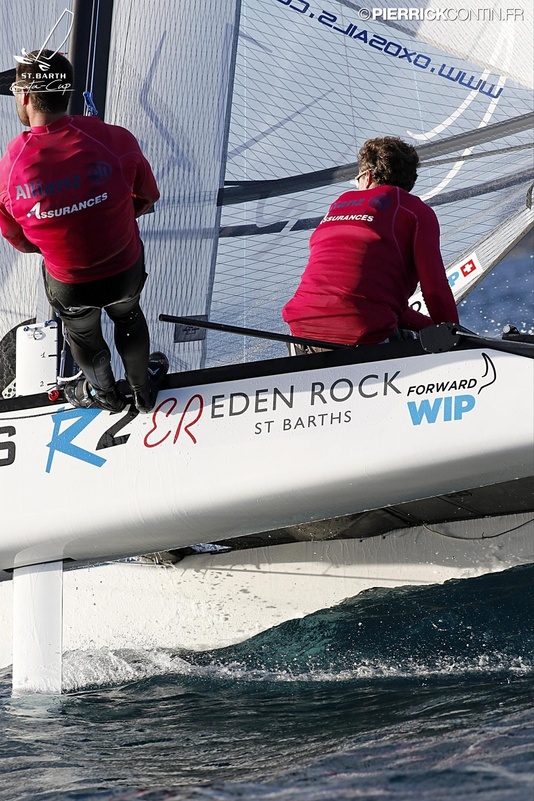 “It looks like it will be really hot out on the water as the winds might be light and in that type of weather conditions there are often surprises. That makes it a challenge from the start. It will be necessary to be observant and show finesse, but also cross your fingers to be in the right place at the right time,” comments Olivier Gagliani, winner of the St. Barth Cata-Cup 2015 with Patrick Demesmaeker (Les Perles de Saint-Barth). Gagliani sees a large number of challengers also capable to compete for the top step on the podium, starting with partners Gurvan Bontemps and Benjamin Amiot (Eden Rock St Barth). “They have tagged us as ‘the guys to watch out for’, as we have actually been on the podium twice already (they were third in 2015 and second in 2016—editor’s note). We have to be even better this year to reach that first place, but the list of favorites is very long. Among then, evidently there are former winners, which is expected, as none of them won the Cata-Cup by chance. But there is also a lot of other serious contenders, such as the Greeks Iordanis Paschalidis and Konstantinos Trigkonis (Relwen)”, explains Gurvan, who had frequently raced against them in Tornado class before finding them as competitors in F18. The helmsman, Paschalidis, has already raced in the Cata-Cup twice with his friend Gustaf Dyrssen and just missed the podium (they finished fourth in 2012 and sixth in 2016). This time, he has returned with his usual partner Trigkonis, and will be hard to beat in this edition of the St. Barth Cata-Cup.Not only because they have raced in every F18 event on the 2017 calendar and finished fifth at the World Championship in Copenhagen last summer. But also becausehe has experience at the biggest events like the Olympics having represented his country twice in the Tornado class (in 2004 with Christos Garefis and in 2008 with his Cata-Cup teammate). “We know that the level of competition is high but we are also very competitive and if we are on the starting line of the race, out goal is to win. We know it won’t be easy to do but we are going to give it our all,” tells Iordanis Paschalidis, who admits to having a few challenges with his equipment.

A Big Test For Deck-Sweeper Mainsails 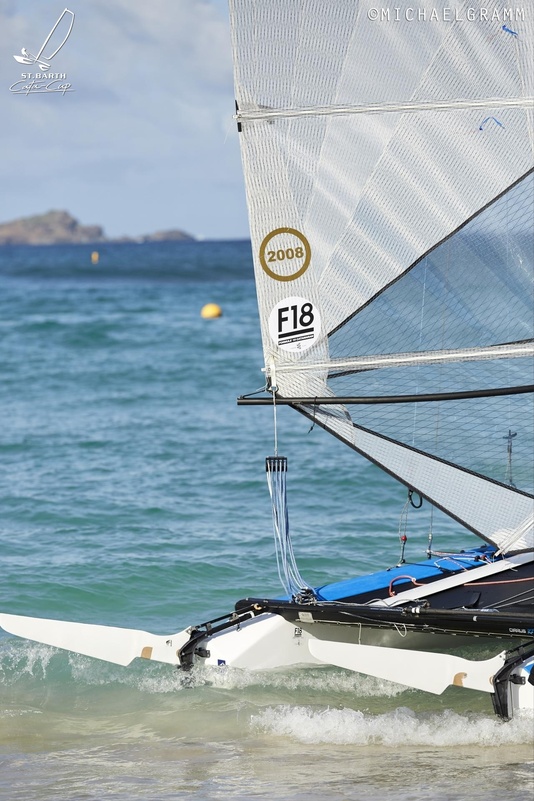 “We have new sails and therefore we are facing some uncertainties about the performance, but the St. Barth Cata-Cup will be the perfect opportunity to test them out facing the best competition there is”, says Greek skipper, who is using Deck-Sweeper sails (used with a sealed trampoline) like seven other boats in the fleet. “F18 is a class that keeps evolving and it’s exciting to be able to try the decksweeper this week in the incredible sailing conditions of Saint Barth. This will add some play to our maneuvers. There will certainly be some new adjustments and some new expectations”, says Gurvan Bontemps who is also sailing with the new Deck-Sweeper sails. The winning boat with deck-sweeper sails at the F18 Worlds in Denmark made a big impression with Dutchmen Mischa Heemskerk (winner of the 2011 edition of the St. Bath Cata Cup) and Stephan Dekker winning the regatta with seven out of eight races. “Mischa is still Mischa, but that means that in spite of everything we will sail well, but it remains to be seen what happens over the next few days”, comments Tanguy Kervyn (winner of the first edition of the Cata Cup in 2008 and teammate of Manu Boulogne on St Barth Assurance). There will be a preview of what to expect tomorrow as the race committee has announced winds of 8 to 10 knots from the southeast sector for the first two races.

Bruno Magras, president of the Collectivity of Saint Barthélemy:

“I salute the courage shown by the organizers of the Saint Barth Cata Cup, first since this event has become over the years an important part of the island’s nautical activities, and also, because it is effectively a great way to revive the spirit of the population, which was subject to a major hurricane on September 6. This is an initiative, I support most heartily, as an elected official, because, without a doubt, it can help us forget a large part of this disaster, and beyond the boundaries of the island, help kick-start our economy. We must encourage events like this. We have made great efforts that are visible, I think, in getting the island back on its feet. However, in terms of hospitality we have a slight handicap, as all of the large hotels remain closes. But I remain confident, and know that those who love the island will continue to come and even if this season risks being a little quieter than usual, the future will be excellent as everyone is pitching in to renovate and get the big hotels back to their excellent standing. All that contributes to overcome the terrible trauma that many were subject to.”