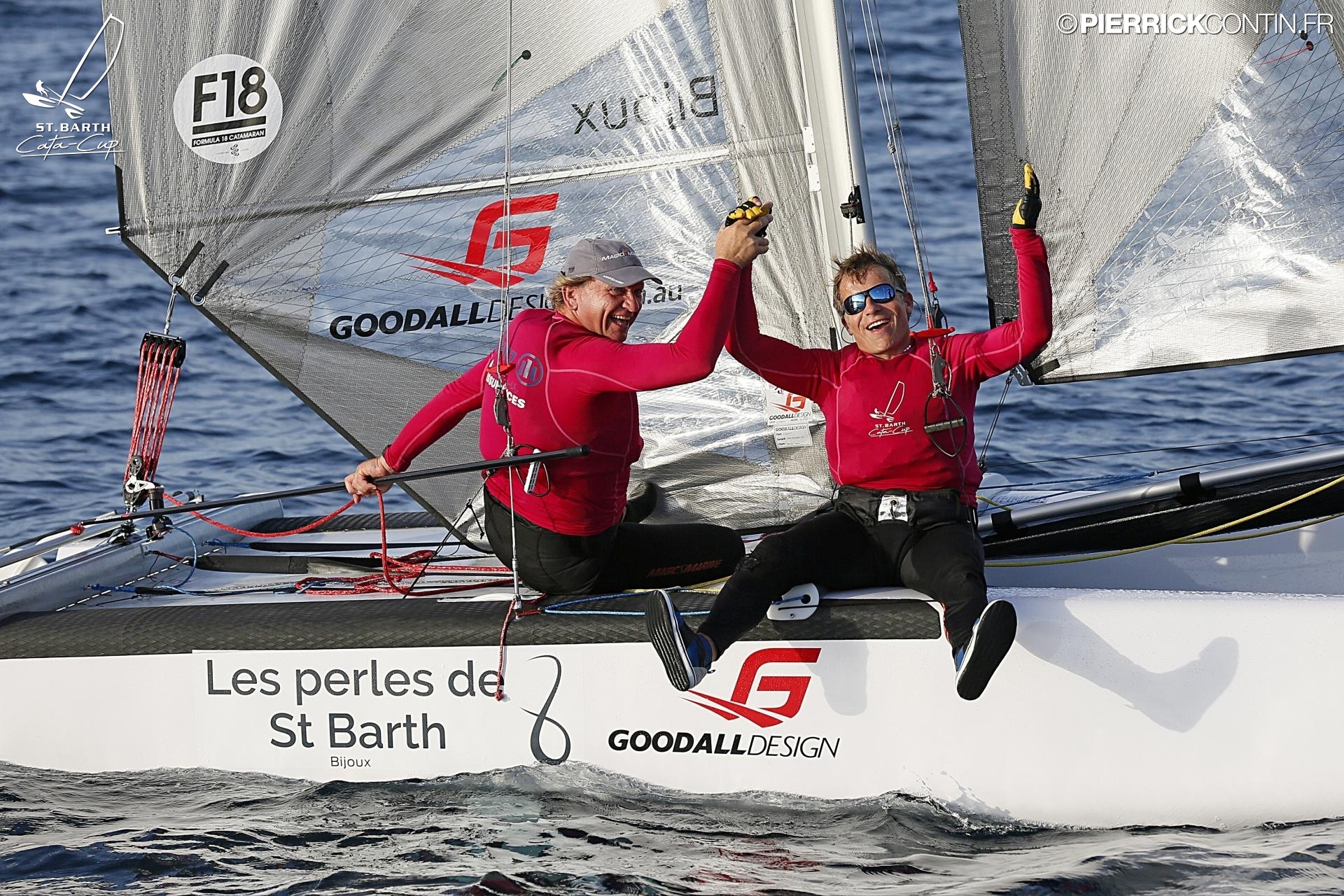 A loop around islands Toc Vert and Bonhomme, then sail between the islands Les Grenadins and Bonhomme with Frégate in the background: that was the amazing route on Friday for the 47 teams of the St. Barth Cata-Cup 2017. Sailing was nerve wracking this Friday. Sailing on the leeward side of the island with south-southeast unstable winds of only six to 10 knots. But Belgians Patrick Demesmaeker and Olivier Gagliani (Team Les Perles de Saint-Barth) sailed two perfect races and were the big winners on this second day. In the overall standings after three races the lead remains with the Greek duo Paschalidis/Trigkonis (Relwen) who made a big impression again.

“The day was very technical & interesting, but frankly not very relaxing. It was nerve wracking”, explains helm James Baeckler (team Maxwell & Co). Baeckler saw his position, like the majority of the teams on Friday, yo-yo in the standings during races of the day. “Before the last tack in the last race, we were among the leaders but we lost ten places before crossing the finish line. Half a hour earlier, the exact same thing happened but in the other way, which allowed us to move up from 12th to 3rd place. We had to accept these continuous changes, but it’s frustrating to be passed at the very end as you no longer have the chance to catch up again”, adds his teammate Orion Martin. “We are doing okay, even though we moved down to ninth place in the overall standings.” The French sailor was impressed by the performance of the Blgium duo Patrick Demesmaeker and Olivier Gagliani who won both races on Friday. 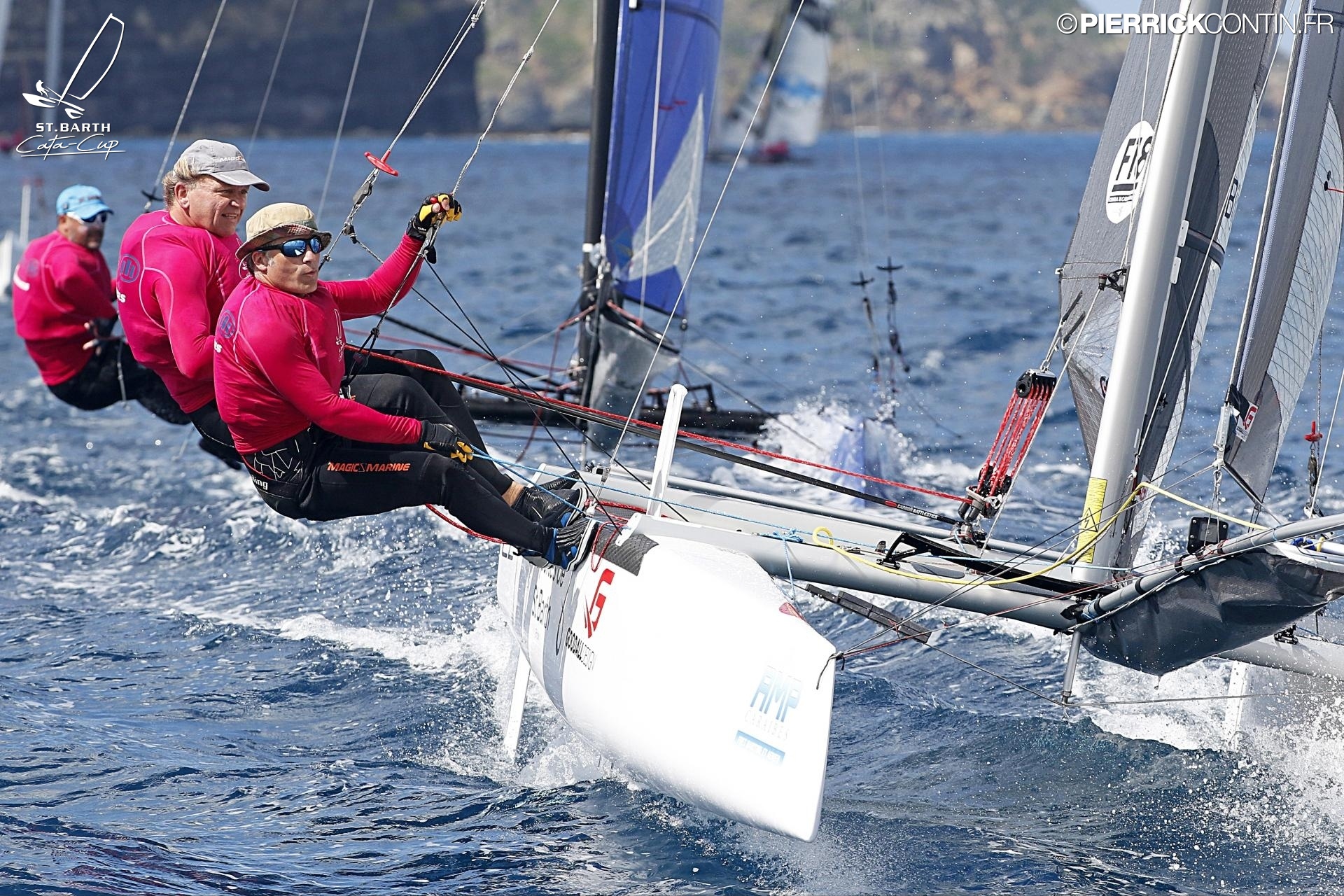 Demesmaeker: “This is the first time since we sailed the St. Barth Cata Cup that we did had such perfect performance like this on the same day. We managed the race well and had good boat speed allowing us to win!” Teammate Olivier Gagliani adds: ”This afternoon the scenario was a little different. After the first half-hour of the race, the top of the fleet ran out of steam Toc Vert. From there the fleet slowed down, but we were lucky to be one of the first to get going and decrease the lead bit by bit.” They perfectly sailed the windward passage at Bonhomme, by going wide and at the same time protecting his flanks while approaching the finish line to prevent being passed at the last moment. “We were afraid Franck Cammas and Matthieu Vandame (Team ODP 1) would pass us on the inside. They came back very close and it’s a good thing the race didn’t last longer,” jokes the Belgian sailor.

Between frustration and excitement
“There was a little less wind than yesterday so it was also more difficult. There were often flat zones with new starts throughout the entire race. This made the race as exciting and frustrating at the same time. We are happy as we succeeded in staying in top of the fleet, often helped by our good speed throughout the race. We also limited our risks by sailing in a conservative way and that paid off,” added his teammate, who is seasoned with regattas between three buoys, but a novice in sailing Raids “It’s a great experience for me, and I really have a good time. It’s very interesting as you have to stay focussed the entire time, but also need to have patience. In these conditions nothing is predictable! The proof: we passed the point of Saint Jean three times and each time it played out differently,” noted Trigkonis who has participating in the Olympic Games four time between 1996 and 2008 (in 470 then Tornado class). The Greek team are in first place in the overall standings with a three-point lead over the Belgian team, and 11 points ahead of the duo Cammas/Vandame. Yet the difference in points is small (especially between third and tenth place) and there is very little room for error in a regatta like the St. Bart Cata-Cup!

Miguel Danet, helmsman on St Barth Sailor : “When there isn’t much wind, it’s not easy, but for Julien (Darmon) and me, as we are pretty light, there aren’t many excuses. Yet it wasn’t easy, especially after two starts under black flags, adding even more pressure. And when you look at the overall standings, you can see that no matter the conditions the best are still ahead. No matter what, as far as we are concerned, we are really happy to be in the race. The event is really great. It is well organized and has a super ambiance. In addition, it’s always fun to race with friends, especially in the case of Julien, it’s the first time on a catamaran.”

Eric Le Bouedec, helmsman for Alamo : “Since the beginning of the race, it has gone well for Jean-Richard (Minardi) and me. We are learning to race together in these conditions especially as this week is the first time we are sailing together. As for me, it’s the first time I have raced a F18 in several years and I am happy it’s still a pleasure. There are the effects of the location as the wind is turbulent. So even if we aren’t at the same level as the folks around us, we are doing just fine.”

William Lesguillier, teammate for Filles des Iles : “The day was very technical. The wind was changing all the time, especially at the start of the second race. The cards were shuffled at Toc Vert. The leaders who sailed close to the island were stuck for ten or fifteen minutes, while those who sailed further out did better. It was as if we rejoined the . In the etop of the fleet. We finished 28th, which is our best result since the beginning of the regatta. We are pleased and hope to continue to improve. We know that the Top 20 is inaccessible for us, but it we don’t make too many mistakes, we hope to finish somewhere in the Top 25.”

Full results of day 2 can be found here.