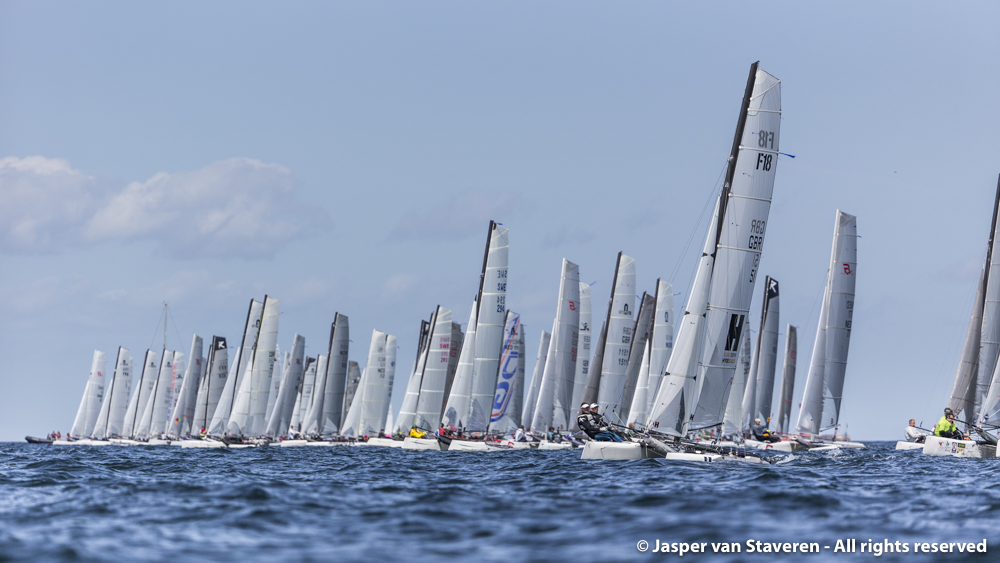 Spring in Europe has begun and many National F18 classes started training for their new F18 season. Meanwhile our Australian friends have finished their F18 NSW Traveller Series. After almost six months of racing this years overall winners are Greg Wyers and Kez Stevens on the Kamikaze. Congrats! Let’s have a look what’s planned for the next couple of weeks…

The Dutchies have been training all winter and started their Spring Cup begin March. This weekend (April 16 & 17) at Muiderzand they’ll have their first official F18 class event. A nice battle is expected because many teams will show up with new Formula 18’s catamarans, like the current Dutch 2015 F18 champs Oscar Zeekant and Charlie Begemann. Jorden Veenman and Frank de Waard will try to beat them this year on Oscar’s/Charlies previous boat. This year Swedish F18 sailor Mathias Söderström parked his cat at Muiderzand to attend some Dutch regattas.

Also Jeroen van Leeuwen (multiple F18 Worlds champ) and Elke Delnooz (Olympic Nacra 17 sailor) will join the F18 scene again, they will start their first races at the North Sea Regatta in May.

In Sweden there’s been a lot of training as well. Sailors are preparing for their first race for the Swedish Cup on April 23th in Stockholm. Last year Fredrik Karlsson and Niklas Nordblom were crowned as Swedish Champs. After the perfect sailing conditions at the Stockholm Archipelago Raid sailors are in line to get their tickets to join the 2016 edition. Only a few slots are left, so hurry up if you want to experience sailing with a GPS.

The season in Hong Kong is about to begin with ~18 boats in HK. The NCA has formed a class within the Royal Hong Kong Yacht Club. This is allowing them to race F18s from a third location in the territory. The season of racing is based on racing arranged by 4 clubs, so they have a bit of a circuit going. Altough the class is an ‘unofficial official one‘, meaning they are not formally recognised, they are able to store boats and piggy back on to the substantial race management resources that the club has in operation each weekend.

At the end of April the 30th edition EuroCat 2016 (Carnac) will be held. Already over 50 cats signed up from all over Europe, if you haven’t signed up make sure you do. A week later the French F18 Nationals will take place at Club Nautique de Pornic where Frederic Duthil and Jean-Christophe Mourniac will defend their title.

The coming weeks several events are planned in Texas and Florida. From May 17 till 21th the famous Florida 300 will be held.

Germany
In German sailors (in the North) are focusing on the Schweriner Cat Cup. This is a multihull event open for all catamarans.  Teams from Denmark will also join as it’s part of their national competition as well.

Belgium
This month a lot of (youth) training is going on at the RBSC. The Belgium sailors are focussing on their Open Belgium Multihull Championship May 14-15.

Last month the Italian NCA started the season with the Raid Primaveravela followed by the first national regatta.

Ireland
In Ireland the first big regatta in 2016 will be the IMA Northern Championship and hosted at the Lough Neagh Sailing Club. This event will be held on 21st-22nd  May 2016.

If we missed some important information, please provide us your updates so we can publish them as well.