From 25th to 27th August, Arco was the usual regatta of the Garda for the Formula 18 Catamarani Italia Class, organized by the Circolo Vela Arco. Again this year in collaboration with the German Association.

Thirty boats on the starting line with some boats coming from other countries.

It started on Friday with a “Ora” wind steadily blowing twenty knots, providing sailors with windswepts, rotations and many intricate crossings for this sporty catamaran that always gives adrenaline and emotions.

New Italian Champions Vettori-Stella were immediately put at light, easily winning the three bullets of the day. Second day has been sailed under classic wind, around 15 knot, right side of the course being always rewarded, before swing under Ponale and away at the mark at maximum speed. Three more races have then been completed, prior to the social dinner to be offered by Circolo Vela Arco.

Sunday was less fortunate. Despite Peler wind was strong in the morning, the Race Committee opted for postponing the departure at 13:00, just as the Ora wind was expected to rise. But probably stopped by a thunderstorm during the night, the wind did not reach the intensity needed to ensure quality races, and nothing was sailed at the end for the third day of racing. 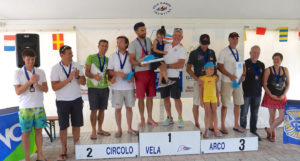 Constant in the results, Vettori-Stella win securely. To follow the crew Sorrentino-Colombo and to the third place on the podium, all Italian, the Radman-Cioni. As a tradition of Italian Formula 18 Class, the fourth Fantasy-Recalcati and the German Dieter-Kathrin were also awarded.

Please have a look at the superb video produced by Circolo Vela Arco, and realised by Emilio Santinelli.

Next appointment is the closing race of the season at Calambrone’s Sunset on 7-8 October. 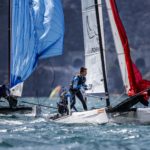 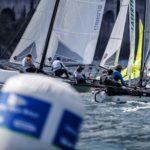 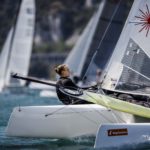 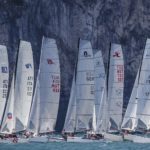