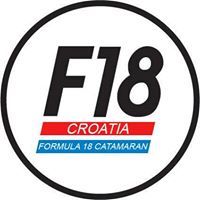 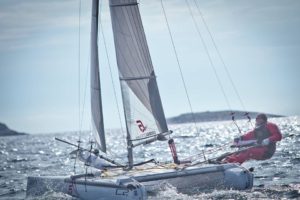 On Monday after a 14 hour drive from Zurich to Jezera Village on the Island of Murter, we started to realize in what a beautyfull place this race is located.

The next day we were warmly welcomed by Drasko from DSR Adria Sport, while we rigged up our C2, the sun felt nice and the wind was promising. In the afternoon I sailed for the first time in Croatien waters, the gusty Bora was lively sometimes hard banging, but we checked out the playground of the Croatien F18 sailors a bit closer.

We met the first Croatien F18 team on a Wild Cat, my boat did not feel slow, nice comparison, it is just overwhelming blasting thru turquoise blue flat water in this picturesque bays. In the evening we had Dinner with Drasko in a lovely Restaurant with a great view to the Kornati, a first idea where the race is about to be.  Next day we practised with the Wild Cat, my boat set up was good I did not have to change settings up and downwind we were faster, in the later afternoon we met a Austrian C2 going downwind it was hard to come close, these guys are fast that was my first impression. 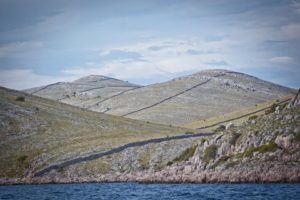 On Friday we first sailed to Pirovac and then crossed over the Murter sea to round the Dajina Vela island we had a local thermal wind called Maestral like the day before…nice. In the evening registration and skipermeeting, yes we go for a long distance race, Yeah.

Two Hobie Tiger and a SL 17 prepared there boats to be ready on Saturday morning. Nine o’ clock we should be ready to hit the water, it is cloudy and the wind is on and off. 4 more SL showed up at the starting line. We started the first Leg at about 11:00 and sail a short distance to lighthouse Prisnjak, I had a bad start and I did not catch the wind patches that good, I finished 5th.

Before the start of the second leg a storm hit us and we sailed close to Žminjak to hold on a mooring and take the mainsail down. The weather cleared up and we started the 2nd Leg at about 13:30. This start was a downwindstart I started close to the lighthouse leeward, 6nm towards the passage always under good pressure of a northwesterly brise. Comming into the passage as the first boat the wind shifted and died a tricky windsituation. It payed off to stay at left when a westerly turning back to a 12-15 Kn northwesterly.

The Austrian boat all the way on the rigth lost quiet a bit and Draško on the Tiger had probable already a 10 minute gap on us. Going upwind for the next 10 Nm tack after tack in this gorgeous scenery under sunny sky it is just incredible nice. 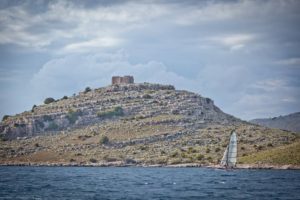 The Tiger and the Austrians could close the gap a little, Drasko managed to finish 2nd. Approximately 2 nm further nordwest in Šipnate bay, we put our boats on moorings in front of the Campsite and Guesthouse. Everything was well organized our bags and tents came along with the race committee boats, and Vid was a perfect host in his small paradise in the middle of the Kornati. After changing clothes and putting the tent up I enjoyed the fine dinner, plenty of salad, grilled fish and potato such a nice bunch of people to be with.

The ones with no tent could sleep in a bed inside the house, in the morning after breakfast we packed our stuff together and at 11:00 we were ready for the skipermeeting, 2 legs are planed. The weatherforecast predicted Bora for later on. So we sayed goodbye to Vid and made our boats ready to sail to the starting area after the passage Proversa Mala. Again we had a downwind start between the island Glamoč and the island Žut there was not much pressure from northwest, I started leeward of the Austrians and tried to pass them windward, thats why we both went far too much windward at the beginning. After gybing I found myself on 4th position. Draško was already far ahead we managed to sail in 3rd and later in 2nd position. The Austrian guys found good wind on both sides and took over half a mile before the finish, at this time Draško crossed the line first. It was an exciting fight between 2nd and 3rd, finally I was about 5 meter behind the Austrians C2.

While we were waiting for the rest of the fleet and the start for the last leg, some strong gusts came in and suddenly Bora was here. This start was on a reach and we flown over the line. Draško in front of us pulling up the spi, we did the same but both had to take it down again when the wind got stronger and no longer a good course was possible.

Draško on the Tiger went ahead little by little, I was probably a littlebit conservative a little bit afraid of the next hammer gust. Honestly,  it was a hell of a ride! Long reaching leg with 23kts of Bora!

Towards the finish we sailed upwind and the Wild Cat team came closer but we still had a comfortable lead over them crossing the line 2nd behind Draško who saild full throttle…cool dude man. 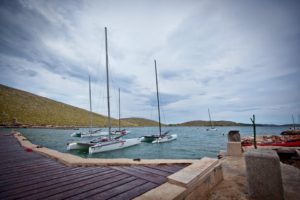 To sail back to Jezera village was a joy 15 to 18 Kn of wind blue sky and flat water in the bay. We took our boat out on the rather tricky slip by gusty shifty wind, rinsed it with fresh water and changed for dinner at the Jezera Village restaurant. Everyone was hungry and the salad buffet and the soup with meat peas and potato was delicious and plenty.

I loved talking about the race with the others, about their problems, and hightlights in a realy friendly atmosphere at the beautyfull spot on Murter island.

Pricegiving ceremony was held at DSR Adria Sport Base in a familiar circle with many new friends. I never expected to become 2nd in the 3rd Murter Challenge 2017.

Fortunately we planed to stay one more day and then leaving on Tuesday morning. The other teams packed their boats together and said goodbye hopefully I see them soon again, we had a great time.

A special thanks goes to Draško who organized this event and a big thank you goes especially to all the helpers and the race committee.

On the next day when we went out it was just perfect weather and the usual thermic wind  maestral 12 to 15 Kn was on, we sailed southeast between the island Duzac and Kakan crossed back to Murter island and tacked up to Prisnjak to enter the Croatien F18 playground once more, last time passing Murter and Betina. We had 7 days sailing of it’s best, I don’t think it could be better. This is the best start into the new season so far, I only can recommend. I think it would be great if I am one of the choosen ten boats next year again!