Six F-18 catamarans competed in the San Francisco Yacht Club Multihull Regatta July 23 to 24. The regatta, in the beautiful and warm setting of Belvedere Cove, is without doubt one of the highlights of the yearly F-18 regatta schedule. 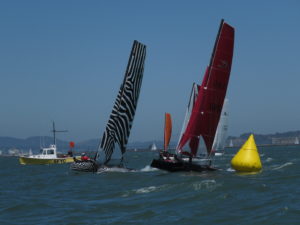 During the racing weekend a heat bubble expanded over the bay and produced sunny and pleasant weather. However, high inland temperatures and strong Pacific Ocean winds ready to be curved into the bay resulted in the usual July wind fest for only the toughest crews!

Saturday racing started early at 11:30 am on a simple upwind-downwind course set on the northern part of the Berkeley Circle. Kaos and Control dominated the day with two first and one second place finish. The wind continued to increase in strength with many gusts reaching up to 25 knots. The last race of the day saw near pitchpoles, two spectacular capsizes, and three boats giving up early. Sunday racing occurred on the waters west of Angel Island. Due to strong and sustained winds over 22 knots the race committee decided to hold only one race. With Kaos and Control forced to return to land due to technical difficulties the series overall win went to Le Zebra and skipper Paul Galvez from Los Angeles who took a brief break from his I-14 world championship campaign to sail in the Bay.

Congratulations to Paul and thanks to the San Francisco Yacht Club race committee which kept a weekend of intense sailing at high winds safe and enjoyable. Saturday night was crowned by a fantastic potluck barbeque held at Charles Froeb’s residence in honor of long-term fleet president Phillip Meredith who decided to embark on new endeavors sailing the bay area’s first Dragonfly trimaran.