All competitors present in Sarasota do suffer from unstable wind conditions from the very beginning of the championship but, when most if not all of them got a least one bad result, one can assess of the perfect control demonstrated by Greek pair Paschalidis-Trigonis, getting nothing worse than a 5th (!) on top of three bullets and one 2nd…

Fortunately for their direct opponents the sixth sailed race now permit one discard, making Burvill-Puttman (AUS) not too far by throwing away the 17th they got in Race 6, same for father & son teams Booth (ESP) and Van Dam (NED), Easton-Bird being pretty consistent with a [10], 9, 3, 2, 3, 9 series.

The fact is that the wind dropped down during this one, being detrimental to 25% of the fleet scored DNF, not finishing within the 20 minutes window after the first boat to complete the race, making all these fellows more than disappointed…

Then no surprise for the Race Officer to send the fleet back ashore, where an AP on A has been displayed early in the afternoon.

Two more racing days are to come, and no doubt Dany and Kostas to be twice as careful in conducting their sailing, in order to get a title they did put as their major objective for 2018 season, following the European crown rewarded last July in Spain.

All pictures by Ellinor from Ellevated Creative. 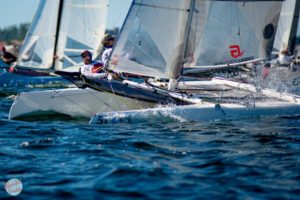 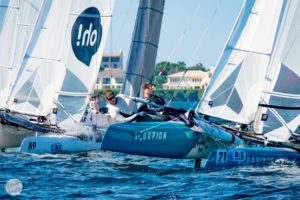