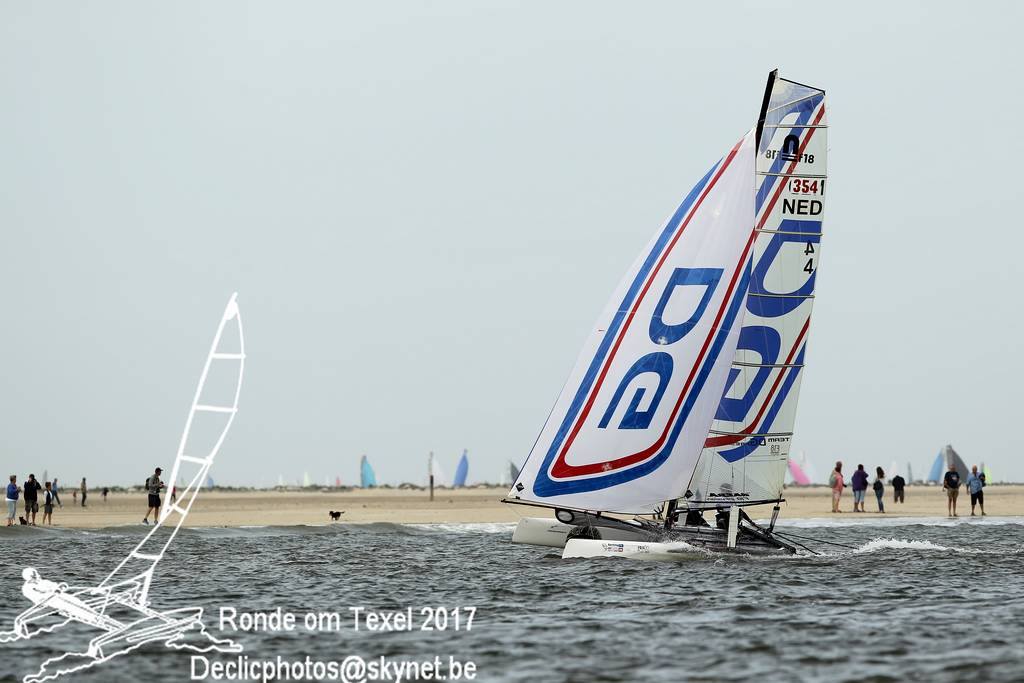 Round Texel 2017, maybe a week of extremes for the 2nd place overall winners Jolbert van Dijk and Frank de Waard. They won this 40th edition in the Formula 18 class after they crashed their boat on Thursday during the Texel Dutch Open and also being disqualified after the race itself on Saturday. But… RC disqualification (without hearing) for many boats was overruled by the Jury so they could be crowned as winners in the end. 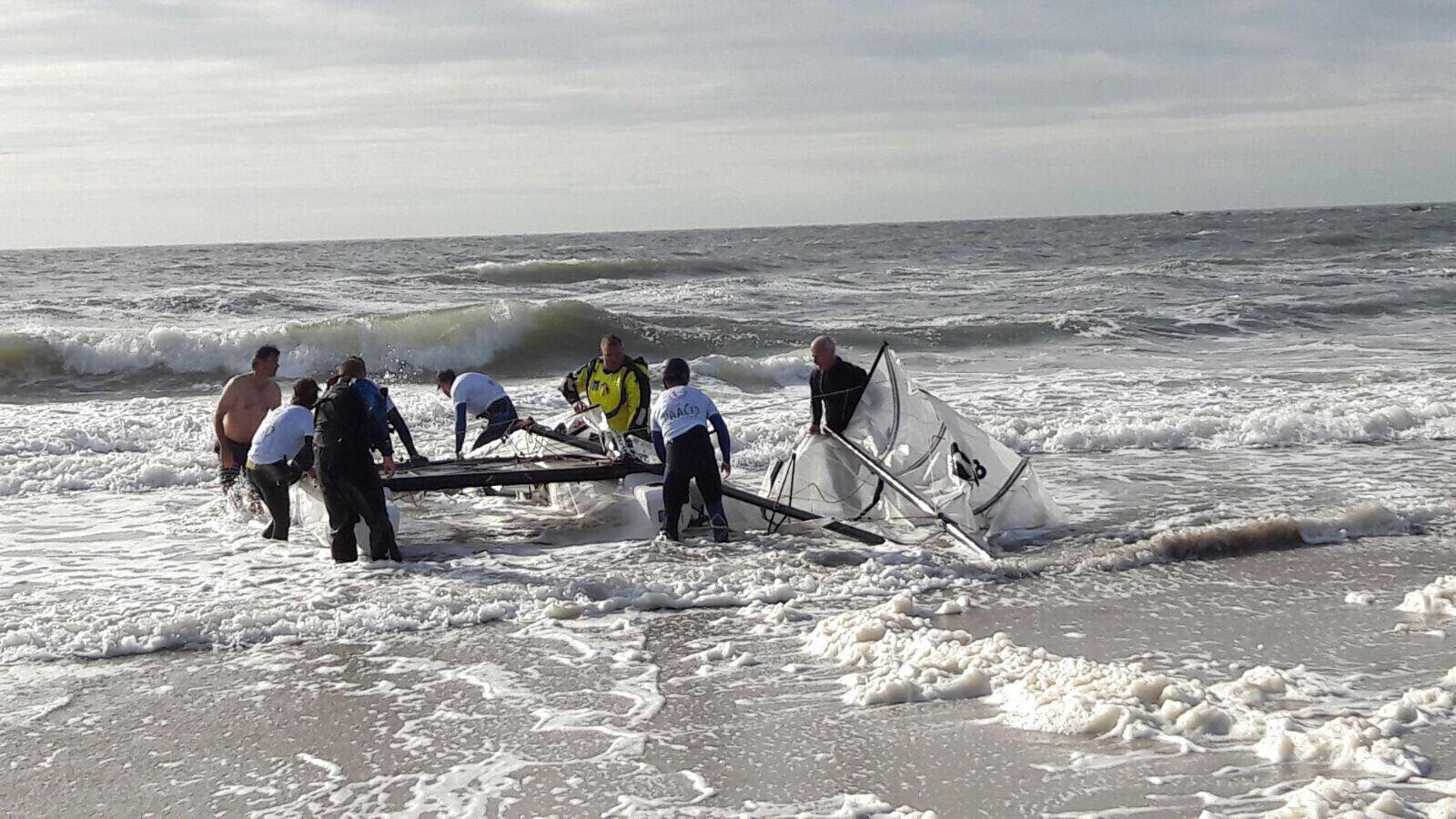 We had a chat with Frank de Waard, crew on the winning F18 and also mulitple winner of the Round Texel Race , interested in his weekend of extremes at Texel. “After we arrived on the Island no sailing could be done because of the heavy condition on Wednesday. But, on Thursday afternoon we were good to go for one race. Conquering wild waves in very nice windconditions we got a 2nd place. We didn’t push it because you know you won’t win the Texel Dutch Open in one day, so after the race we sailed back to the beach in a way we always do. But, suddenly we’re grabed by a wave…lifted and pitchpoled in unshalow water. Result: our boat was upside down, a broken mast and damaged main sail. Thanks to all our fellow sailors in no time 10-15 guys of them were there to help and to prevent more damage (they all know how much these boat cost). Realy great to see this kind of support!”

But Jolbert and you didn’t sail on Friday, how come? “On Friday I woke up with a strange feeling in my arm. After a quick medical check I got the advice not to sail the Texel Dutch Open if I wanted to sail the Round Texel race on Saturday. So we decided to drive to Nacra HQ (Schevingen) to get all the spare parts we needed and drove back to Texel to fix the boat. When we arrived many sailors were there again to help us to rebuild the boat… a big thanks to these guys! They made it possible for us to be ready again to race on Saturday.” 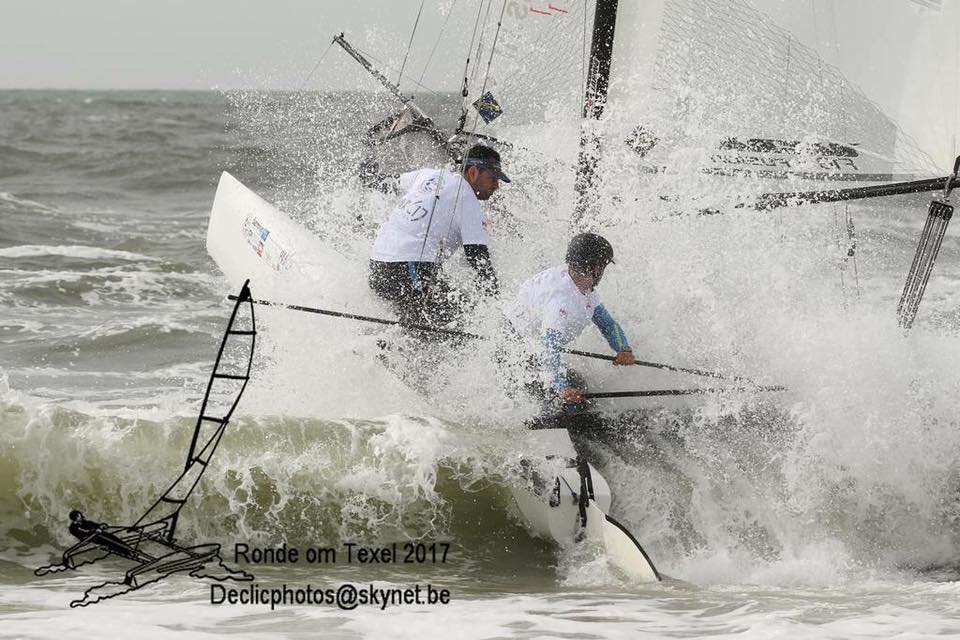 On Saturday sailors briefing started early, at 07:15 am. Conditions were looking good for the day. Frank de Waard: “At 08:15 we hit the water to be ready for the start at 08:40. Our goal: to start as close to the beach as possible with the maximum amount of breeze and the shortest way to the first gate at the lighthouse. We thought it would be busy at our start position, but in the end we had a clear start with almost no cats around us. On our way to the lighthouse we did some very good business!”

“We arrived as 2nd Formula 18 at the Lighthouse, just behind Gerard Loos and Pieter Van Ruitenburg. A few foiling Nacra 17’s were just in front of us, but after the gate we decided to keep our kite up a bit longer than the competition and and that’s how we caught them. At that moment we were almost on top of Loos/Van Ruitenburg on their Hobie Wild Cat. We both reached very gentle towards the VC-buoy because the water level was surprisingly a bit higher compared to previous editions.”

“After VC-buoy Loos/Van Ruitenburg went upwind and we made a tack to shore. After that we had a tacktical battle with many tacks but managed to overtake them and extend our lead. In the distance we saw the White Bear (from William Sunnucks/Mark Self) foiling. When we got near ‘het Molengat’ we were able reach a little bit and hoist our kite again and go straight to the finish. With a nice avearage speed we only had one goal: get the best finish time possible, so no time to relax!” 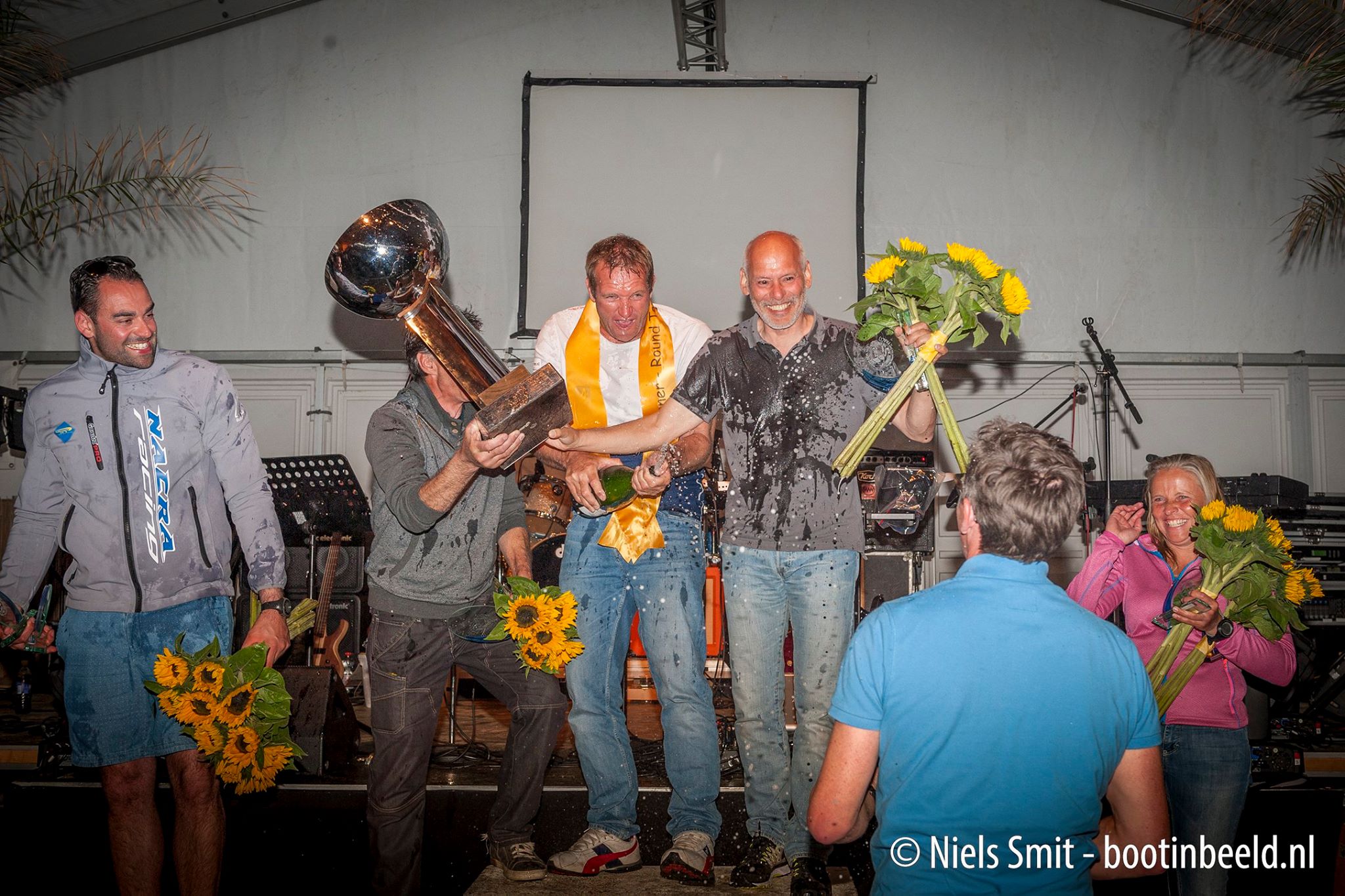