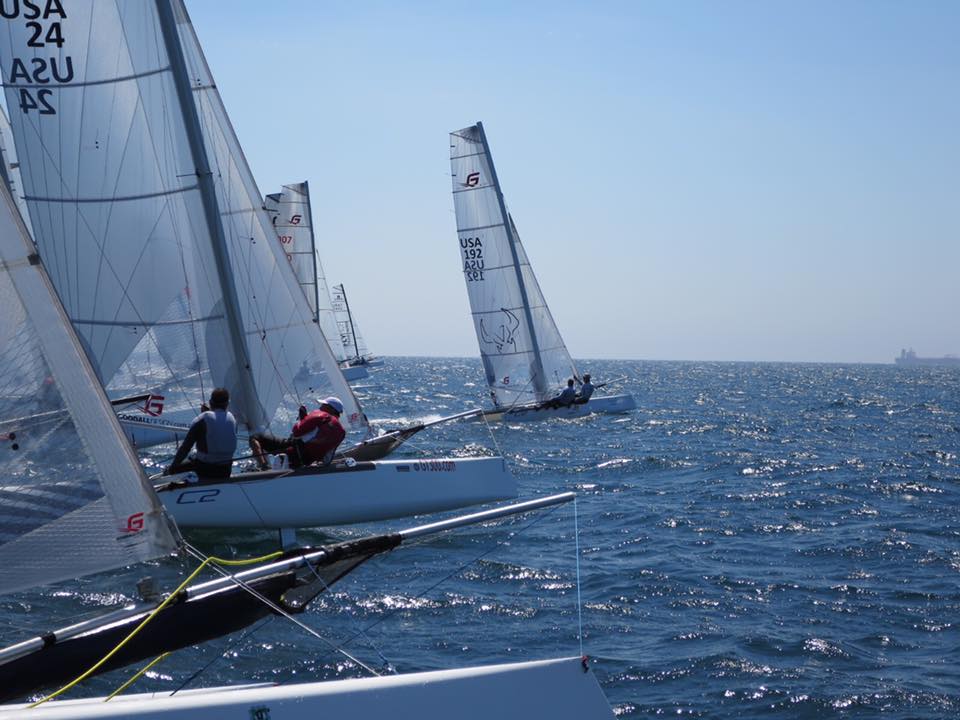 At the Alamitos Bay Yacht Club the 2017 Formula 18 Americas Championship are held from 6 – 9 September in Long Beach (California) with a maximum of 16 races. To encourage sailors from Central and South America the biennial event acts as the USF18 National Championship with a change to the “Americas” title biennially. After the first day father and son Ken/Erik Marshack are leading with 3 wins. In second place are Charles Tomeo and Dalton Tebo from Sarasota (Florida) followed by Charles Froeb and Erwan Griziaux from San Francisco.

Conditions were heavy on the first day of the 2017 Formula 18 Americas Championship featured big breeze of 18-24 knots and 3-5′ steep waves. The F18 normally handles big wind very well, but with these waves caused issued for many teams leading to nearly half the fleet only finishing one race. After 3 races, Ken and Eric Marshack from Portland, Oregon lead the Formula 18 Americas Championship being sailed out of Alamitos Bay Yacht Club in Long Beach. Long time F18 sailors, this father son team are one of three teams sailing with a new sail design called the “Decksweeper” sail, they are also one of the heaviest and tallest teams sailing the event which gave them lots of extra horsepower upwind.

Thursday forecast is for slightly less breeze of 12-16 knots and the course will be inside the breakwater. 3 more days of racing and with several top teams sitting on the beach the results will get mixed up a bit in the coming days and will lead to some exciting racing!

Check the USF18 Facebook for frequent updates, photo and videos!