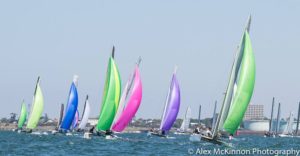 Finishing second of the two races sailed on the  last racing day, when Burvill-Gibson scored a third and one bullet, Van Kerckhof brothers did succeeded to keep their 4 points advantage and, accordingly, to be crowned 2017 Australian Champions.

Last racing day in Port Melbourne started in a light breeze, who did permitted the Race Officer to launch the two remaining races on the schedule. Although Daniel Van Kerckhof got some foot injury, and the brothers badly started race 11, AUS 441 did crossed the finishing line in second position, securing then the title with one race to go.

Whatever the case, Van Kerckhof brothers did competing in race 12, getting one more second place, when Brett Burvill & Lachlan Gibson got the last bullet. Considering the various wind conditions met in Port Melbourne, and considering their worse score being a 6, no question to contest the value of Van kerckhof’s Title.

Pretty good series for Burvill-Gibson too, 6 points ahead impressive NZL rookie team of Olivia Mackay and Micah wilkinson, and it is then important to stress true performance of first U18 team, Lauchie Hugues-Harrison Rietman, finishing 9th overall among numerous talented crews, auguring well for the future of F18 Australia.

Further to this, to note the interesting initiative from AUS F18 to create a special reward for First Generation Formula 18 boats, 14-year-old Jack Challands and 18-year-old Edward James being the winners, sailing a boat bought just a few days before the event.

Speaking about future, it is good to hear 2018 Nationals will be held in Western Australia, and to note that AUS F18 is prepared to put a bid forward to host 2020 F18 Worlds.