2016 Worlds have been officially opened on Sunday 30th October, at the end of a warmful and friendly ceremony led by Juan V. Tedin, YCA Commodore, and  Marcel Bacque, Regatta Chairman.

Olivier Bovyn, IF18CA President, heartily thanked proud sponsor Galicia Éminent, and all those involved in building up the event, Freya Mors and YCA volunteers being at the first place, as well Martin Vanzulli, Chairman of Argentinean F18 National Association, and former Chair Ian Rodger, who initiated the first talks about Worlds during 2012 event in Long Beach. 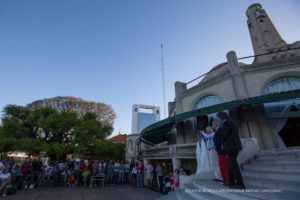 Further, Olivier Bovyn thanked all participants for entering the event, making a wish for this gathering of South American fleets to become a classic to be sailed on a regular basis as a Continental Championship in the future.

He then thanked International Jury members and Race Officers for the work to be delivered all along the event, wishing the best fairness to rule the regatta, and wishing the sailors the most enjoyable sailing week on their fabulous F18s.