This year wasn’t an easy ride for the 250 catsailors during the Round Texel race 2015. Windspeeds between 16-25 knots and big waves asked ‘full focus and concentration’ of them. The whole race was a battle between Jorden Veenman and Frank de Waard versus the overall winners in 2013 Oscar Zeekant and Charlie Begemann. At the finish the difference between both teams was just 30 seconds. Simon Northtrop and Sam Barker, winners of the Texel Dutch Open on Friday, were third and finished just 10 minutes behind Veenman/De Waard.

At 10:30 it was time for the start of the 38th edition of the Biggest Catrace of the world. “It was a mess at the start. We had to find a good spot near the startboat and the beach to have a good view on the flags. Our timing was perfect and so we had a great start. At Texel this is very important because the start determines 90% of your end result. Our speed was good on our way to the Texel lighthouse and we were able to keep up with the faster Formula 20’s. From the open water we saw Zeekant/Begemann approaching, but because of their course they were able to hoist the spinaker a bit earlier and so took over the lead. That’s were the battle between the Formula 18’s really started. Till the VC-mark the water was really flat and so the speed was going up. Showtime….!”, smiles De Waard. 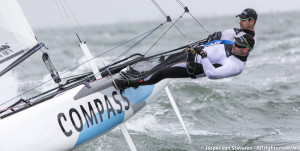 The leg from the lighthouse to the VC-mark is notorious: to or not to be, that’s the question. The shallow water is dangerous, especially at high speed. Rudders and daggerboards get damaged easily. De Waard: “During the race we noticed that the water level was very low already. From that moment we sailed a bit slower, flipped the rudders a bit up just to save the boat till we reached the VC-mark. Not a bad choice afterwards when we saw William Sunnocks standing next to his boat… the water just reached his knees.”

After the VC-mark it was time to go full throttle again. Beautiful battles between Veenman/De Waard and Zeekant/Begemann were a fact and we both took over the lead all the time. But, near the Texel harbour ‘Oude Schild’ it went wrong. De Waard: “We did a jibe, but afterwards it was a wrong decision. Zeekant/Begemann were able to enlarge their lead towards ‘het Molengat’ at the western end of the island. This is an area with often big waves and those are not easy to sail at all. We both made it through this waves and from that moment it’s normally the question who’s able to hoist the spinaker first for the last part straight to the finish. Unfortunately for Zeekant/Begemann they were hit by a big wave near the beach and tipped over. This was were we closed the gap for the last miles to the finishline.”

Undetectable finishboat
“These last battles were really nice, we were in sort of a herd in a hurry on the way to the finish. But that’s where the real challenge started: no finishboat at all…? And than we literally found ‘the smallest finishboat ever’ between all the big waves. And, we made it as first Formula 18 and were 3rd overall”, explaines De Waard. Everybody is now looking forward to the next big catsailing event: The Formula 18 Worlds in Kiel – Germany. Expected is that the magic number of 200 Formula 18 catamarans will be reached. Also a lot of the best Olympic catamaran sailors will come straight from their worldchampionship in Denmark to the Formula 18 Worlds. No doubt this is the most populair catamaran class wordwide. 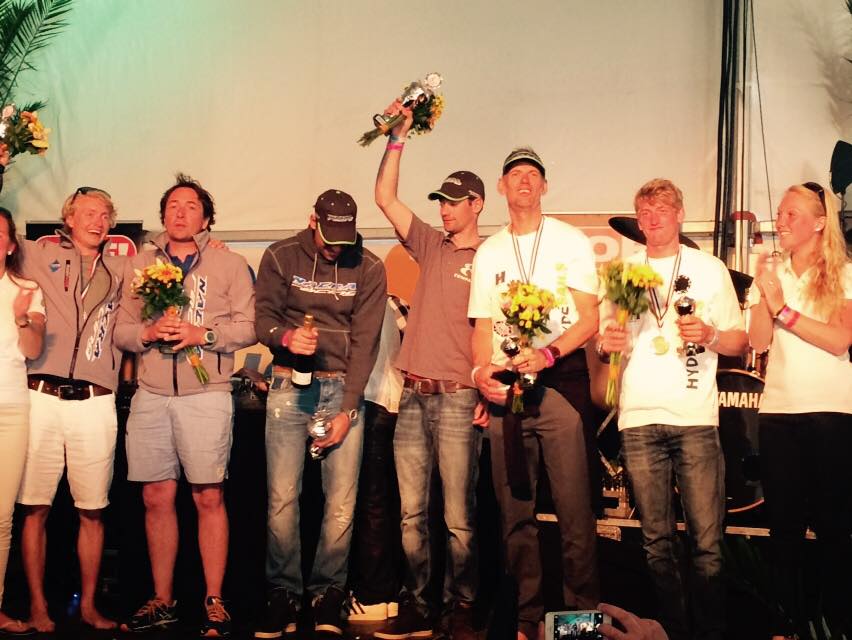 The next edition of the Round Texel race will be on 25th June 2016. Full results Formula 18 class here. Photos: Jim Hoogerhout (beach), Jasper van Staveren (action photo) and Round Texel (ceremony)