Punta Ala and the Circolo Velico Punta Ala hosted the usual three days of the Formula 18 Class from June 2nd to 4th. Best organization that did not betray expectations, along with the high-level of the Committee. 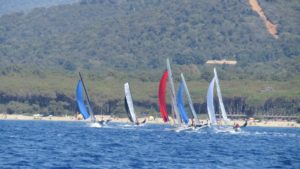 National race with 22 crews registered and present on the starting line. The wind has not failed. Always from the southern dial between 8 and 12 knots, then surprise on Sunday, the last day of the event with an intensity of up to 16 knots. Sun, little wave and summer temperatures have accompanied the regatants and family members in the beautiful Cala Civette. 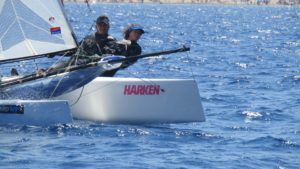 The program was completed with all 9 race in program. Battles and edges pulled for this performance catamaran, easy and safe at all speeds. Unprecedented ranking until the last race. 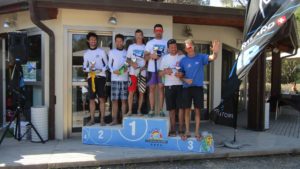 Italian champions 2016, Mazzucchi-Lisignoli, to their first national regatta, won the trophy, followed just one point away from Viganò-Viganò. Third, fourth, and fifth second, but all in three points. Fantasia-Recalcati, Radman-Lamante and De Grenet-Marzorati.
Next appointment with the Formula 18, National Championship at Follonica, at the Naval League from 22 to 25 June.
News, photos and rankings on the site of the Italian Class Association: www.formula18.it
————————————————–
Alessandro Pelliccia
Ufficio Stampa e Sito internet
www.formula18.it
infopress@formula18.it
cell. 349 8078321