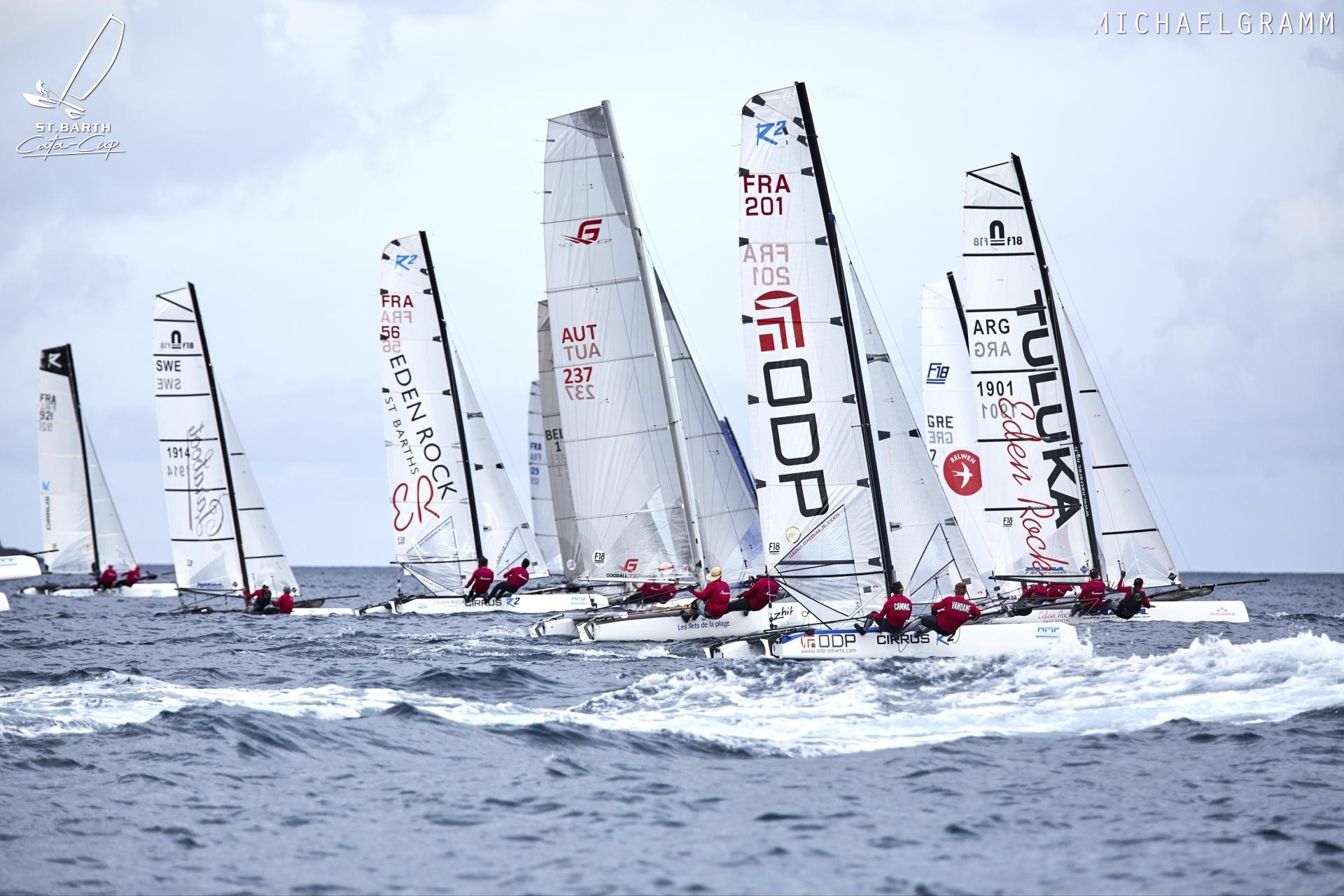 Thursday November 16th 2017 no less than 47 crews were at the start line of the 10th edition of the St. Barth Cata-Cup. With a nice south-east wind between 8 and 12 knots the boats were on their way for a nice tour around the island.The effects of the several rocks and the island itself are huge, so it’s an important to choose wisely where and how to round the island. The Greek duo of Iordanis Paschalidis & Konstantinos Trigkonis (Team Relwen) were the fastest on the first day followed by Pierre Le Clainche & Antoine Joubert (Team Design Affairs – 001) in 2nd. French routiniers Franck Cammas & Matthieu Vandame (team ODP 1) finished in 3rd.

The first race of the St. Barth Cata-Cup started at 14:30 for a raid of twenty miles around the island of Saint-Barthélem. Pierre Le Clainche & Antoine Joubert (Team Design Affairs – 001) had a good start and controlled the fleet for 99% of the race. Even the feared Grenadin crossing went very well for this team, but they couldn’t prevent being taken over in the last 100 meters before finishing. “It’s a bit frustrating to be in the lead for 99,9% of the race and to be overtaken in the very last meters”, tells  helmsman Vannetais on his arrival at the beach. “Near Saint-Jean, we were between the Greek on one side who took more advantage of the pressure on the course, and Cammas/Vandame on the other side.“ In the last stage of the race the Greek made the difference pure on top speed. “It was really nice fight and conditions were superb. After the start we were a little afraid of being confronted with big areas of light wind , but the a constant wind was there during the whole race”, tells winner Iordanis Paschalidis who’s a serious contender this year for winning the 10th edition. 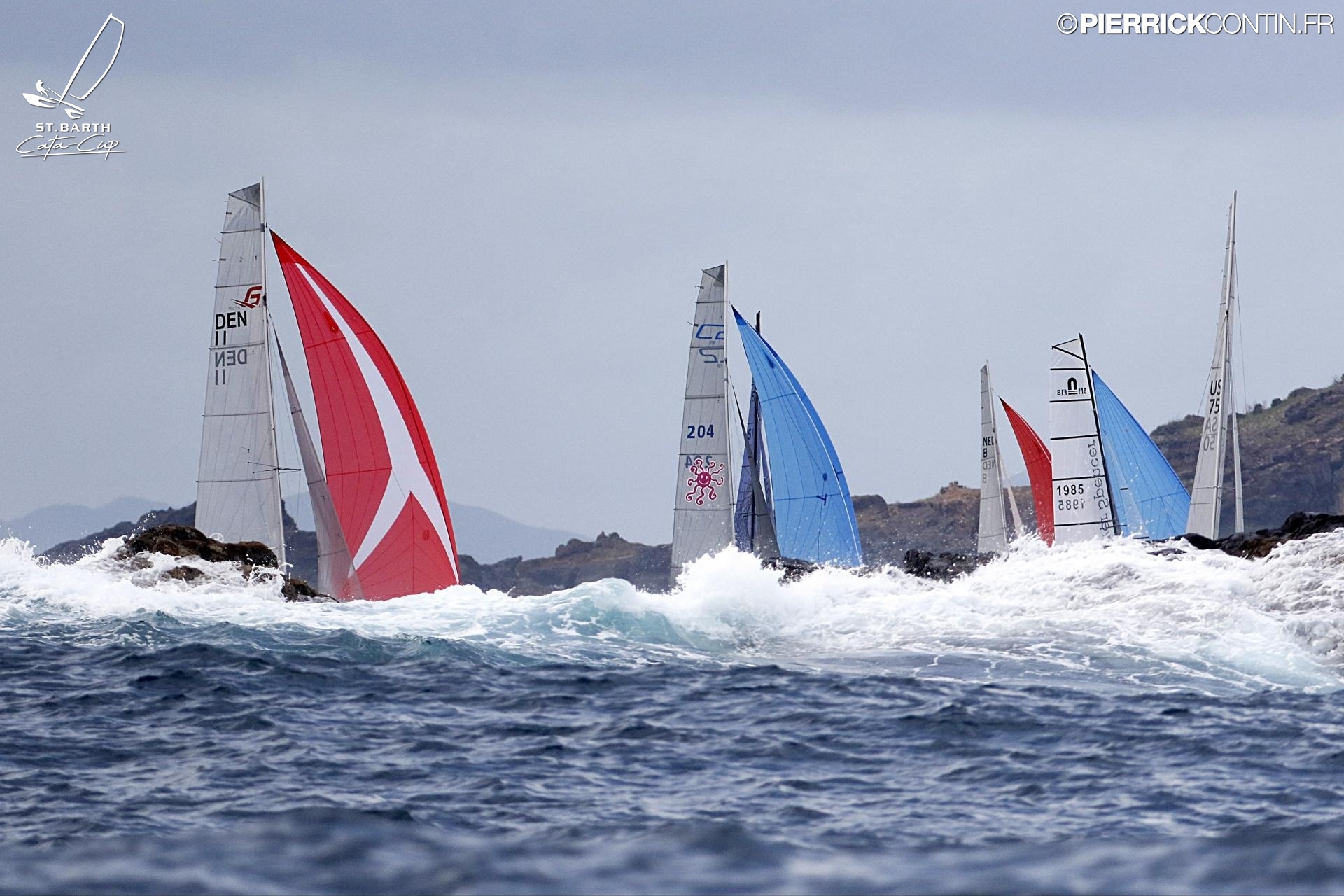 Some favorites luckier than others
“We are not celebrating yet as we know the competition will be tough till the end, especially with for example all-around sailors as experienced as Franck Cammas and Matthieu Vandame”, adds the Greek competitor. The winners of the 2013 edition of St. Barth Cata Cup also showed their moves on the first afternoon, in spite of a slight lack of speed. “I think we sailed well and were in good spots at the right time, but when we were sailing next to the other boats we noticed we were not among the fastest. We got a good start but ran into some issues, but at the end of the day we finished okay in third place. Some other boats went after the start to a buoy that wasn’t part of the race”, explains the helmsman of ODP 1. Emmanuel Boulogne and Tanguy Kervyn, winners of the very first edition of the St. Barth Cata-Cup in 2008, actually lost their spinnaker, as it exploded before the race. “This kind of accident is infuriating, especially when it happens ten minutes before the start. It will be complicated for us to catch up”, admits Boulogne, who quickly replaced his sail to be ready for the next race.

Markku Harmala, helmsman of SBYC: “We’re really happy because we finished in the top 15!We came here to race without any ambition, except to participate and confront us to the best international sailors in the F18 scene. It’s a great result because usually we finish in the middle of the fleet. Hope it lasts! Meanwhile, it’s good for our morale, especially after the passage of hurricane Irma on our island. We have been working like crazy since September to get back on track and the race is relaxting for us. If it is an advantage to be a local of this stage? Probably, but not today because the wind was quite south, an extremely rare situation here in Saint-Barth.“

Fredrik Karlsson, helmsman of Paraboot: “What a day! It was really great and super interesting. We left between Demesmaeker and Paschalidis and, of course, we quickly got covered. After that, we made some mistakes but at the end of the course (between le Pain de Sucre et Colombier) we managed to catch ten boats to finish in 16th place, so we smile tonight. On the other hand, I want to say one thing: the two most beautiful regattas in the world are the Stockholm Archipelago Raid at our home in Sweden, and the St. Barth Cata-Cup. Everyone must know it! “

Charles Tomeo, helmsman of Marla: “Today we had a lot of fun on the water. The start was very interesting! Many boats were going wrong and went towards a mark that was not part of the course. Not us. We made two nice tacks to get to the first buoy. Then Dalton (Tebo) did a great job, especially in the unsteady winds of the island. In the end, we finished 5th. It’s a great result and it gives confidence for the next days.“

Olivia Beguelly, partner at designaffairs – 001: “Design Affairs has been a partner of the St. Barth Cata- Cup since 2009. Johannes Zingerle, the company’s president, is keen on sailing and is keen to support such an event. This is even more true for this edition, on the one hand because it is an anniversary edition and on the other because the context, after hurricane Irma. It is an opportunity to share good times all together, including internally with the many employers.”

Full results of day 1 can be found here.