Three races were sailed on the second day of the St-Barth Cata Cup, this day was sponsored by St-Barth Assurances/Allianz. All races were won by Orion Martin and Charles Gaté (team St-Barth Assurances/Allianz) who couldn’t please their sponsor more than this. Yesterday’s winners John Casey and Colin Page couldn’t make the difference today but ended up sencond overall. The Boulogne brothers, Emmanuel and Vincent, did a good job and were welcomed to step on the podium a s well. 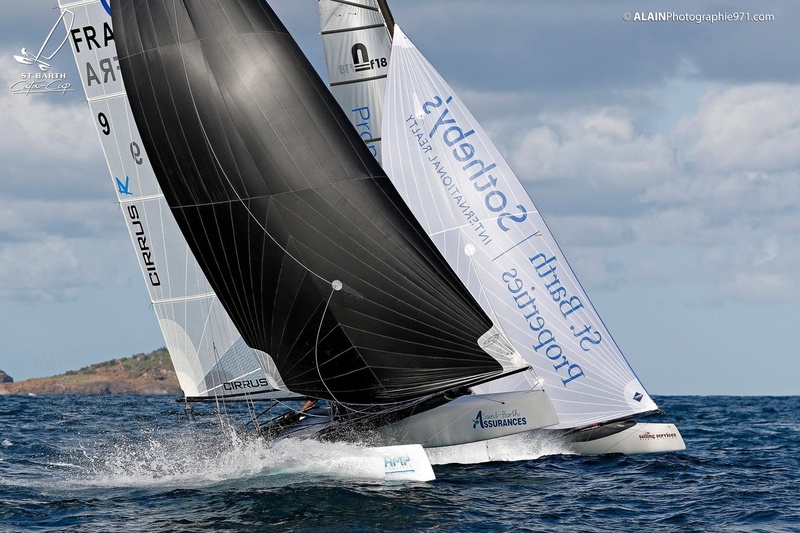 “This year, the competition is fierce having all the big names of the Formula 18 Class here in St. Barths. So this victory three races on the same day is superb!”, tell Charles Gaté and Orion Martin. “We made a very good tactical choice at the start of the first race and were able to maintain our leading position till the finish. The other two races were trickier. Particulary the last race which was really close, but we were able to reach the first buoy while leading and keep the others behing till the finish again.” The conditions have been extraordinary since the beginning of the event and today was no exception. In the morning, the best racers were able to cross the finish line after 35 minutes. In the afternoon, the second race took 55 minutes followed by as 40 minute final race.

St-Barth Assurance/Allianz, a loyal partner
St-Barth Assurance/Allianz is the St-Barth Cata Cup’s founding partner, dating back to 1992 when it all started. Unfortunately, the event was held for three years only before it was interrupted by hurricane Luis (category 4 in 1995). When in 2008, a group of catsailing enthusiasts decided to bring the regatta back to life, they naturally turned to Anibal Dacuna, founder and manager of St-Barth Assurances/Allianz. Anibal has always made a point of honor to take part in the organizational life of the island and so he partnered with the organisation. Today, Henry-David Grossard heads this long-term partnership. “St Barth Assurances/Allianz is the sailing ambassador of St-Barth. They have been invested in local sailing for more than 20 years, both on national and international event like the Cata Cup and AG2R transats – 1998 –  2002 – 2008″, explains Hélène Guilbaud, from the organization. “We consider ourselves privileged to be able to count on such a loyal partner.”

Besides being the race partner on Friday and Saturday, the sails of 4 boats will proudly display the St-Barth Assurances/Allianz logo.