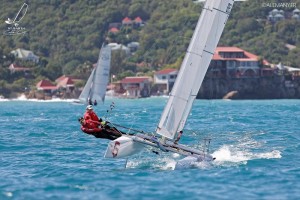 It was a tight fight till the end when the last two races were sailed last Sunday at the St. Barth Cata Cup 2015. The Belgium team with Patrick Demesmaeker and Olivier Gagliani again did what hey were doing all week: Sail a constant serie with mostly a 3rd of 4th position. On the final day the gap could only be closed by Orion Martin and Charles Gaté if they kept the Belgiums behind them. After the last race was finished a gap of four points was still there and the title goes to Belgium. Gurvan Bontemps and Benjamin Amiot had a very good final day of racing, but were not in the position to close the gap with the winners and ended up in third position overall.

About the St. Barth Cata Cup
The ST-BARTH CATA CUP is a high-calibre sporting event where catamaran enthusiasts come together under the Caribbean sun. After three editions in 1992, 1993 and 1994, the St-Barth Cata Cup was relaunched in 2008 by Vincent Jordil, Jeff Ledee and Thierry Linares. The St-Barth Cata Cup brings together competitors of various nationalities, from world champions to Saint-Barth residents.

The St Barth Cata Cup is also part of the ‘F18 Hall of Fame‘ where you can find all F18 winners of the biggest events since the class was founded. Of course these fresh champions have been added to the list as we speak!