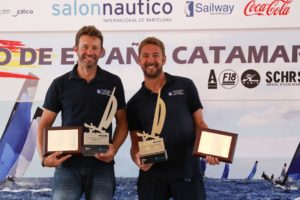 The Spanish Catamaran Championship organized by the Real Club Náutico de Vigo took place from 6 to 9 September.
Of the three scheduled days of competition only two days could be navigated and four races only have been sailed when nine were scheduled. 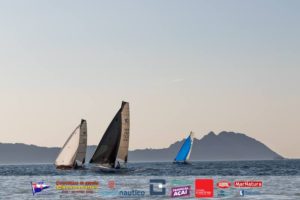 On Friday two races were held, with very light winds that forced the committee to try to move the playing field, looking for more pressure. The same situation occured on Saturday, when after dawn the wind of 10-12 knots decreased in intensity until almost disappearing during Race 3. For Race 4, the last of the championship, the committee moved the fleet to the inner estuary where it could celebrate the manga.

On Sunday the race committee advanced the first warning signal of the third and final day to 10:00 hours, and planned to implement the course in the area close to the club, but a heavy fog suddenly rolled on the area and, although it seemed to fade away, the remaining races were cancelled, and then the championship ended, given that none of the four possible racing fields were visible from the shore.

The Championship ended with the prize giving ceremony, held in the Noble Hall of the Vigo Society, Fabián Migoya and Alexis Parcerisa (CN Castelldefels) being proclaimed Champions of Spain, tied in points with Jordi Sánchez and Alberto Torne, 2017 Champions. 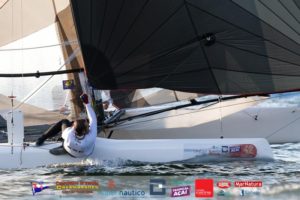 F18 Spain do want to thank the effort made by the Club Náutico de Vigo and its secretary Chisco Catalan, who have given the fleet an excellent reception. Congratulations to the champions and to all the sailors who have participated.

The results here
Photos at https://www.facebook.com/f18es/
Photos of Luis Fráguas

The next event will take place in the new 2019 season on the occasion of the Spanish Cup to be held at the Puerto Sherry Yacht Club from May 23 to 26.

A big hug to all