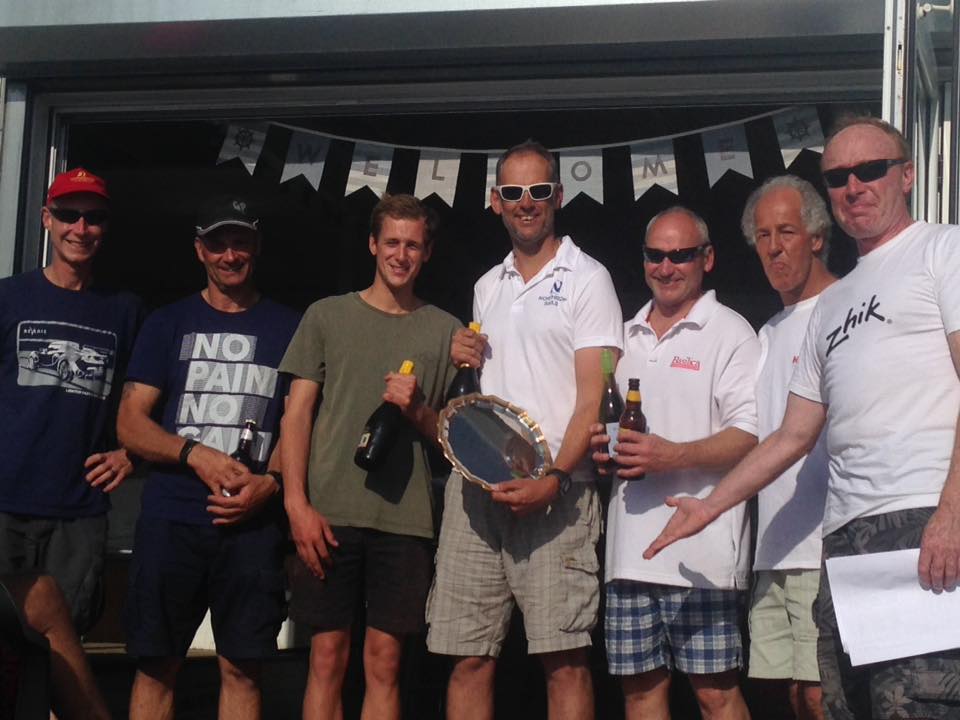 The UK F18 National Championships at Hayling Ferry SC were held on 26th,27th & 28th August 2017. A truly special event this year for many reasons at a time of flux and change within not only the sailing world but especially beach cats at an extraordinary venue very close to the beach cats and F18s hearts. A report by Simon Flack.Day 1 – Race 1
Light conditions, in a tidal area blessed with sunshine saw fairly steady 4-6knts from the SSW and the fleet of 13 boats head up the first beat of race 1 with tide squee making port flyers and right hand side deceptively unfavourable however boats deciding to plum for this option soon found themselves at the top marks in the top 5 places with more experienced sailors like grant Piggott and Simon Northrop work hard to get into the lead through the lucky ones after 3 slow laps. Failing to make the start due to stolen parts Uk Class Chairman Simon Flack and crew Neil Green only made a practice lap missing race 1 and tradgicaly gained 14 points.

Mid fleet to top parts of the fleet bunched saw major tussles and raft ups at the bottom mark with Master F18 sailors Tim Neal & Bob Fry looking clean and staying clear of trouble getting up into the top spot briefly only to be dealt an lucky hand as the three boats of Northrop, Piggott & Barnes whispered past to claim the podium, leaving tim & Bob in fourth overall.

Race 2 – After the start Flack/Green & Northrop/White sparked out right gaining good VMG alone and unnoticed until half way up the leg when the fleet saw the pay off and desperately tracked back with Neal/Fry boosting incredible boat speed arrived on the lay line just behind the two leaders. The fleet were left behind and by some great tactical decisions Barnes/Baldry managed to slip past Neal/Fry to squeeze into 4th following Flack/Green in 3rd Piggot/Farren 2nd & outstandingly Northrop/White in a slim 1st place!

Race 3 – Same Conditions but Ap went up because of a last min shift, well done to Mike & team on the race crew. Then the sequence began again and the fleet were away! Stunning boat speed throughout the event shined through from Tim & Bob masters in tactics and boat handling and Race 3 saw their first and well earned bullet ! Grant Piggot & Fraz Slipped into 2nd for the third time and Northrop in his first and only 3rd of the event. Great Food, band and jolly sailors getting merry at the fantastic club acres sail!

Day 2
Domination again from Tim & Bob claiming 1st in race 4, only to loose race 5 by a fine piece of downwind close quarter attacking, cover and roll by Northrop on the final lay line to the finish!! Barnes had a stunning weekend, along with Piggott/Farren, Flack/Green despite the lost of race 1, day 1 and of course Northrop & White becoming consistently scoring and dominating at the close of business before curry and a balmy evening at the welcoming club of Hayling ferry SC.

We had a great event and well done to Simon Northrop who won for his Father who passed away a few days before. Well done to Freddy White who’s been 2nd at this event sooo many times its about time he won for himself and for his Granddad Reg White!! Well done Boys and well done to all. Thanks for a well organised event, a welcoming team and club membership at Hayling ferry, see you at the forts in June 2018!

A screenshot with all results per race here.