It is not a surprise for Iordanis Paschalidis & Konstatinos Trigonis to be crowned 2018 F18 European Champions, so much their route was regular all along the regatta. Although they scored a 23 in race 13, when closest contenders Burvill/Puttman and Booth/Booth respectively scored OCS and 28, a 4th place in Race 14 allowed them not to sail Race 15, the title being secured.

Closely following the Greeks from the very beginning of the Championship, Australian pair Burvill/Puttman refused to give up, and entered last racing day the knife between teeth, with a series of OCS, 1st and 1st as a result, leading them 4 points behind the winners. Battle has been tense, specially against young team Henri Demesmaeker & Morgan Wirtz, scoring three 2nd places, but, following the protest lodged by the Aussies in Race 15, International Jury disqualified them according to RRS 13.

Consequently, Mitch & Ruben Booth, who have been awarded with the “Family Affair” Trophy, finish third overall, when Orion Martin & Charles Gaté, scoring a successful series of 1, 3 and 4, succeed in getting fourth place, 2 points ahead Henri and Morgan.

Whatever the case, young Belgians won the U23 award, and no doubt a brilliant sailing career is to follow. 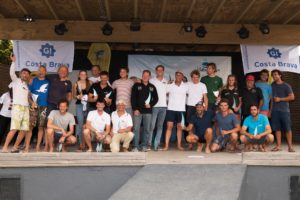 A warm prize giving ceremony put an end to a wonderful sailing week, and to a magnificent championship, thanks to Pep Subirats and his team, and to La Ballena Alegre staff and employees. No doubt the Class is open to discuss any possible event in the future.