Last weekend, October 3th-4th, it was time for the Belgium Open Nationals 2015 in Oostende. With 26 Formula 18 catamarans at the start from 4 different countries it was good to see that Nationals are more than local events. Besides the 12 teams from Belgium there was a big fleet from the Netherlands with 7 boats who came for revenge after the Belgium Patrick Demesmaeker and Gilles Tas ‘stole‘ their Dutch Championship a couple of weeks ago. But also the British teams found their way to Oostende through the Eurotunnel with 4 cats,  three other French teams joined by land as well. Simon Northrop and Josh O’Brien are on fire the whole year and did their trick again in Belgium. With only 5 points overall after 5 races they won the event. The best Belgium team Wim Deca & Koen Cleeren were crowned as the new Belgium Champions! 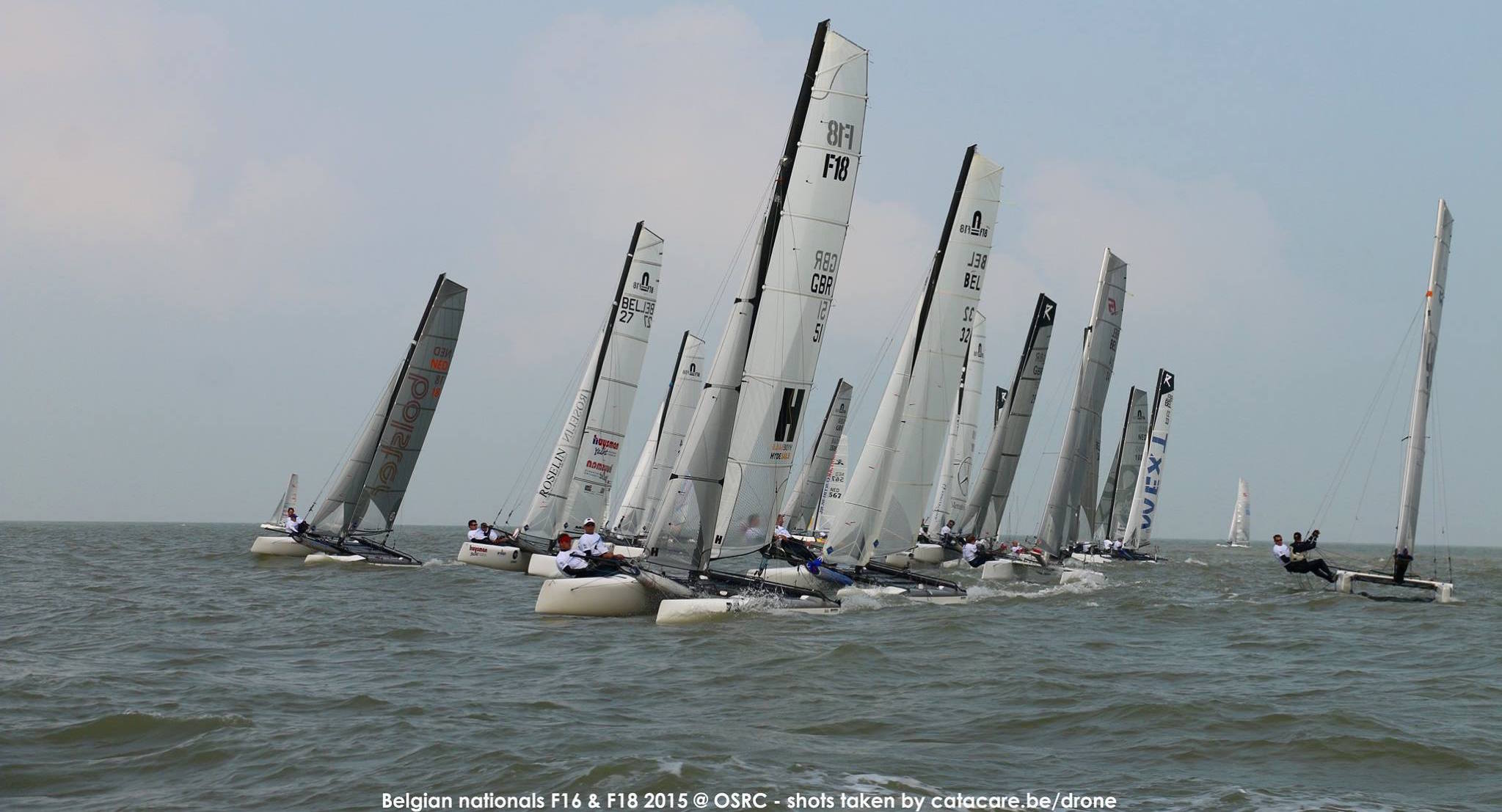 On Saturday around 13:45 the cats could finally hit the water with 5 knots of wind for their first and only race that day. Northrop & O’Brien immediatelly grabed their chance and noted their first win. The second race was abandoned at top mark as wind faded and it was time to go back to the beach for a typical ‘Formula 18 family BBQ’.

Simon Northrop: “The Brits love coming to the Belgium nationals. For us it’s a quick trip across the channel and actually quicker to get to the Belgium coast than some of our UK events, so it was great to be able to make it as there was no UK regatta planned. We have been going really well all season and fresh from our win at UK nationals we were feeling confident but very aware that it would be a tough event. Saturday we had a good start in race 1 along with Wim Deca and Koen Cleeren, but we held him off to lead the whole race. Sunday we kept our heads out the boat and just tried to get a good start and use our boat speed to get away from the pack. We are really pleased to come away with another championship this year and hope the Belgiums and Dutch teams will join us in UK next year where we would love to be able to reciprocate the great hospitality we received at the OSRC!”

Fresh Belgium Champ Wim Deca adds: “The sailing conditions with just a little bit of wind were difficult for everyone but made it also exciting. During the start of the final race we hit the start buoy, so we left the start line in last line in last position. Fortunately we managed to finish in 5th position to secure our championship.” Deca/Cleeren expected to have more opposition from Demesmaeker/Tas, who have been sailing a very good season so far. “We had a great weekend of sailing, but the conditions were too shifty for us to make the difference. We prefer to have more steady conditions”, smiles Demesmaeker.

Bas Paumen, the Dutch NCA chair: “The club in Oostende organised a very nice event. And the city offered fun nightlife after the races on Saturday, but I’m afraid that this affected the performance of the Dutch sailors slightly on the Sunday. Sunday really offered a lot of variety in sailing conditions. For all sailors the club had special prices, a big bottle of Belgium Special Beer ‘Brugse Zot‘… which will help us to remind us how we felt during the last race on Saturday when the buoys were sailing faster upwind than the cats…. at least that seemed that way due to the strong current… sailing backwards.”