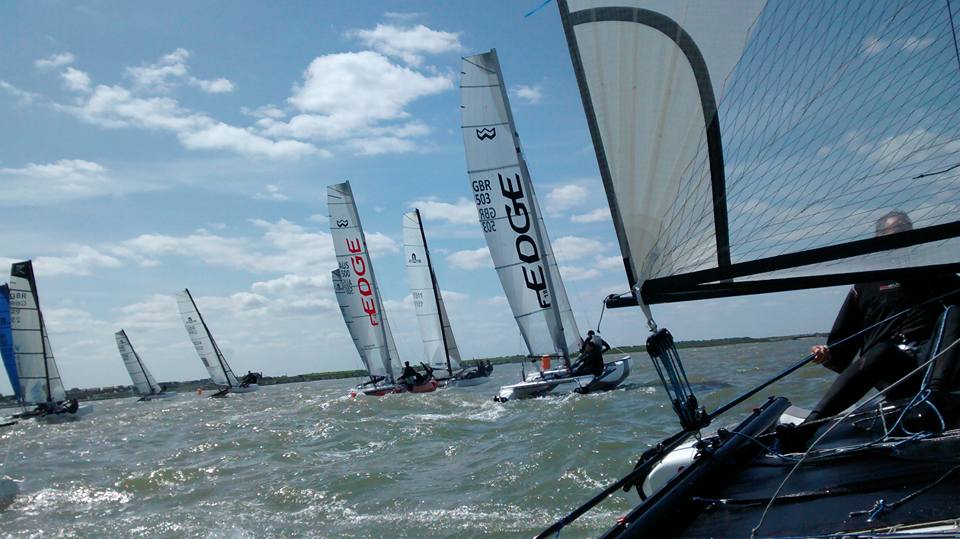 Over the weekend of 16th/17th May eleven Formula 18s visited the North Kent coast to Minnis Bay S.C to contest the seasons 2nd TT in conjunction with the Shearwater Fleet TT. Both Classes enjoyed some fabulous racing and with some tricky wind shifts. Also a strong tidal flow in the Thames Estuary affecting tactical decisions as to which way to go up and downwind it was never an easy racecourse to get to grips with.

Saturday
On Saturday 3 races were sailed. After a long sail out to the race course area the fleet got away cleanly at the first attempt and headed inshore out of the heading tide and into flatter water. Local F18 sailor Simon Northrop sailing with Josh O’Brien having been buried off the start and forced to tack out to sea came good as they had noticed more breeze out to sea. A favourable right shift negated the strong tide and they lead by a large margin at the first mark. A lead they extended throughout as the wind went even further right and made the course one sided, 2nd place was taken by Grant Piggott/Adam Kay and 3rd by William Sunnucks and Freddie White.

The course was reset for race 2 and the wind had dropped considerable. White/Stoneham took an early lead on the first lap, only to lose several places at the leeward mark as the fleet barrelled down in new pressure from behind. Piggott/Kay took the lead for a while but were overhauled by Northrop/O’Brien who were playing the shifts nicely. Once in front they never looked back to take their 2nd win of the day with Piggott/Kay 2nd and Paul Wakelin and Oli Greber 3rd. With the wind stabilising slightly and the tide easing White/Stoneham established the lead in race 3 and covered Northrop/O’Brien all round the track until the finish. Much to their dismay they failed to get the gun as they had been OCS at the start. This allowed Northrop/O’Brien to take yet another win with Nathaniel Ward/Caleb Cooper 2nd and Piggott/Kay 3rd.

The fleet retired home to the beach where the ever helpful members of the home club had walked out their trolleys to the Low tide mark to ease recovery. With a fantastic Curry and “Doom Bar” sponsored evening all Formula 18 sailors were up late and partying hard with the fantastic Shearwater fleet.

Sunday
With the racecourse moved back into the Bay and in full view of all the spectating families and friends, a steady 15 knots of breeze and bright sunshine made it glamour catamaran sailing at its best. Northrop/O’Brien’s local knowledge paid handsomely off the start as they were the only boat to start on port and head out to sea. Although they had to duck a few boats to get there, the racecourse with the strong flooding tide was very one sided. After rounding the top mark with a huge lead they never looked back to take the win. The chasing fleet was very close and a battle for second was one by the “Flying Cow” of Team Edge sailors Matt Young and Simon Farren taking 2nd from Piggott/Kay in 3rd. 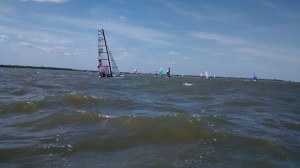 In the 5th race Northrop/O’Brien were first out to sea again after another port start. Young/Farren were chasing hard though and these two pulled well clear of the rest of the fleet. Where a royal battled ensued with the 2 boats never more than a couple of boats apart – Young/Farren led for a lap and on the 3rd downwind leg with Northrop/O’Brien no more than a boat length from their transom. Both boats travelling at almost 20 knots the Edges Spinnaker Halyard snapped and Northrop did well to miss them but O’Brien suffered a slight injury to his shoulder though bravely carried on racing. After this mishap Young/Farren retired to shore for repairs leaving Northrop/O’Brien to take another race win and the regatta win convincingly. White/Stoneham took 2nd with Wakelin/Cooper 3rd.

The wind had dropped for the last race of the regatta to a gentle breeze and after a quick trip to the beach to change crews Northrop was back. This time Northrop was sailing with Shearwater crew Chloe Stewart, just 13 years old, and having never been on a Formula 18 before! Having quickly shown her which bits of string to pull (an F18 is somewhat different to a classic Shearwater…) they nailed the start and led the race for the first lap before White/Stoneham sneaked past downwind. They were never to be headed to take a well deserved win from Northrop/Stewart in 2nd and Piggott/Kay 3rd. In all Northrop/O’Brien dominated the event taking 5 out of the 6 races, Piggott/Kay finished 2nd with White/Stoneham taking the final podium slot.

Thanks must go out to all the helpers at MBSC, the Race Committee and Race Team who made a very enjoyable and unforgettable weekend and lastly to the Shearwater fleet with their Main Sponsor “DoomBar” providing 2 Kegs of the Ale for the winning F18 and Shearwater Teams.