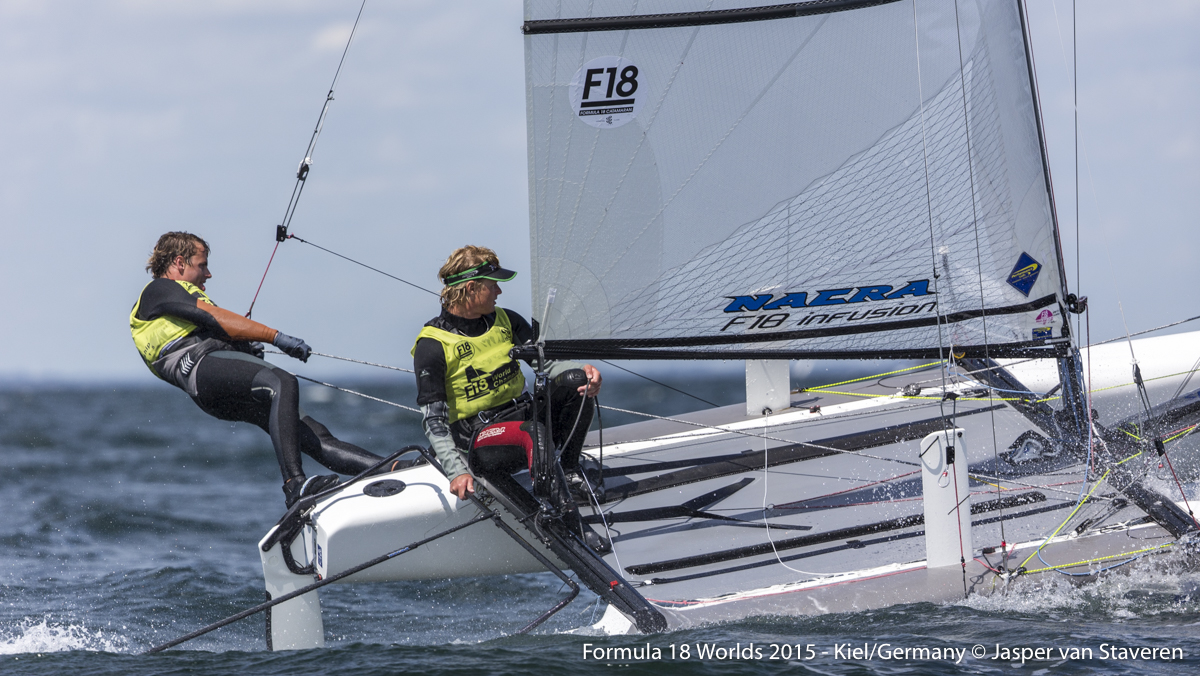 Saturday it was time for the medal races at the Formula 18 Worlds 2015 in Kiel – Germany. With a very competitive fleet of 167 catamarans from 24 different countries. This was the biggest fleet ever at a Formula 18 Worlds! Gunnar Larsen and Ferdinand van West (NED) won fort he second time in a row and prolonged their World Championship title. In two spectaculair final races the Flying Dutchmen showed that they can do the unexpected: Having a bad start, get at the top mark in 15th position and still finish in 3rd place. Oscar Zeekant and Charlie Begemann (NED) tried their best this year to be on the highest stage of the podium, but like at the F18 Worlds in 2012 in Los Angeles they were second again. The last chance for Zeekant/Begemann to win the World Championship was taken away by Mother Nature by increasing the wind to 30+ knots. Glenn Ashby and Brett Goodall (AUS), who didn’t sail together for a year, were able to get on the podium this year.

Last year Gunnar Larsen said at the price giving: “We had to wait 15 years to win a Formula 18 Worlds and bring the cup to the Netherlands”, this time it only took them a year. These guys know how to handle their boat and have a top 5 result in any kind of weather. At the beginning of the week qualifications the fleet started in medium conditions, on Wednesday the last qualification race was held in only 2 bft. of breeze and ended with 6+ bft. Winning the event again next year in Argentina will absolutely be their goal. Only Mitch Booth won the F18 Worlds 3 times in a row. Taylor Reiss and Matthew Whitehead (USA) won the Formula 18 Youth Championship for the fourth time in a row and nearly made it to the overall podium. These youngsters are getting better and better every year and will be on the podium some day.

The International Formula 18 Class Association looks back at a very good organized and sportive event. The German Class Association showed that the ‘pünktlichkeit & gründlichkeit’ was the key for succes. Also all different boatbuilders can look back at some good exposure of their boats. A mix of different brands in the top 10 show the F18 box rule does exactly what is has been designed for. One is faster upwind, the other faster downwind, but they all sail very fast. This year we even had a surpise, a new type of boat was showed called the ‘Scorpion’. This boat was sailed by multitalent Mischa Heemskerk and showed the boat was very fast. Unfortunately, due to a broken tackline, Heemskerk missed 3 races to do repairs and destroyed any chance to be in the overall top 10.