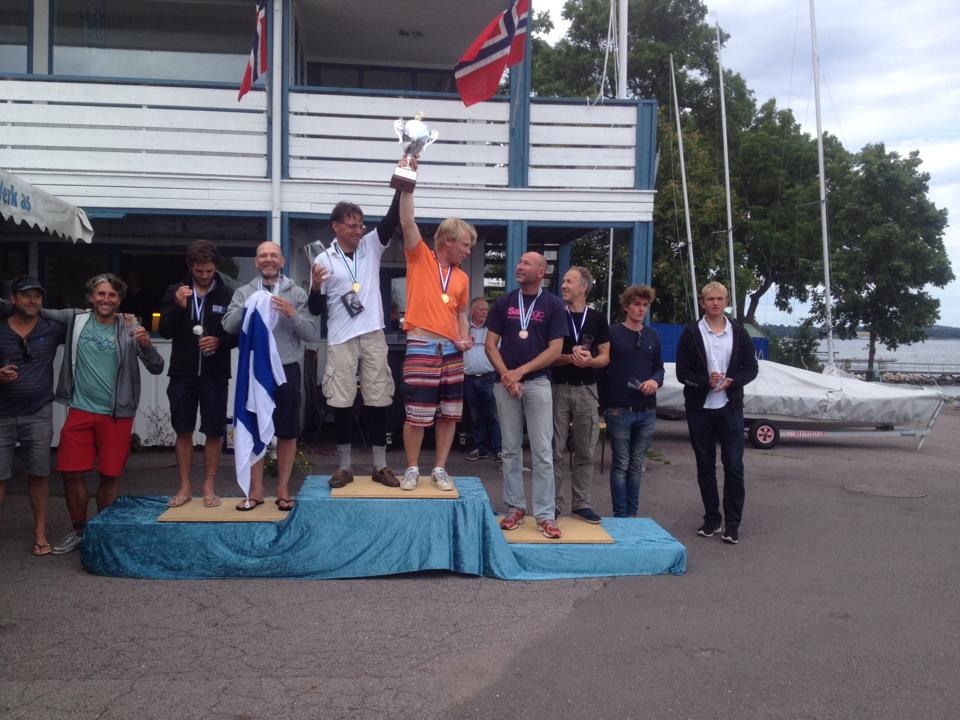 From 14-16 August 2015 this years Nordic Championship was held in Åsgårdstrand – Norway. Twenty boats from seven different countries had a wonderful weekend sailing a total number of 8 races. The podium was a nice Nordic mix with Fredrik Karlsson and Niklas Nordblom (SWE) on the highest step on the podium. Mikko Räisänen and Ollie Hartas (also known as the Lions of Finland) have been in a fight till the end to secure their 2nd position. Tim Sandberg and Pål Kirkebø (NOR) ended up third overall.

The regatta was this year held in Norway, approximately 100 km south of the Norwegian capital Oslo. On Friday races were scheduled, but due to lack of wind no races could be started. On Saturday and Sunday sailors had perfect sailing conditions in 14-18 knots of breeze. Winner Niklas Nordblom: “We arrived to the scenic Norwegian village, Åsgårdstrand, with mixed feelings after a catastrophic Worlds in Kiel. Out of eleven races, we have had five with different letter combinations (2 x BFD, DSQ, DNF and DNS). Thus we did not really know our level. On paper, our worst opponents were Sandberg/Kirkebö (NOR 27 – 12th at the Worlds in Kiel) and Berensson/Wersäll (SWE 107 – 15th at the Worlds in Kiel). Saturday we had light to medium easterly winds and flat water. Before the races we did split tacks with SWE 204 and knew that the right hand side was favored. We started the first race well and tacked immediately over to port and were leading at the top mark and won the race comfortably. The second race we started a little more conservatively in the middle and thus could not tack immediately, which SWE 104 did and consequently won the race. We finished second. In the third race we went again for the right side of the course, which turned out to be wrong. The advantage had turned to the left side and it stayed like that for the rest of the series. NOR 27 took full advantage of the left side and won comfortably. We finished fourth. NOR 27 took the port end start in race four and we were the next boat at the port end. We could not challenge NOR 27 and stayed a couple of boat lengths behind throughout the race to finish second. NOR 27 looked really strong after two consecutive wins. Once again NOR 27 took the port end start and we trailed them for one lap. Then suddenly the wind increased a bit and shifted to our advantage and we found quickly the right trim and could pass them and win the race by a very thin margin. A very important win psychologically.“

Sunday
“After the first day of racing we were leading in front of NOR 27 and Räisänen/Hartas (FIN 5), who had a string of second and third finishes. Sunday the winds were a little bit lighter and FIN 5 with 140 kg crew weight looked really strong. They took the port end start in the first race but tacked over a little bit too early so we could pass them at the top mark. We did a mistake by gybing early and allowed FIN 5 to pass and win the race in front of us. In the next race FIN 5 once again did a better start than we did and was in front of us. We felt that they had a slight speed advantage on starboard tack. We went a little bit further on starboard tack than FIN 5 and after tacking over to port we lifted a little bit, found the speed and could roll over them. Extremely important psychologically. At the windward mark we rounded at the same time as DEN 18 Nicolaisen/Vogelius but were lucky to fill our gennacker first and could go on to win the race. The last race we had an intense battle once again with DEN 18 (27th at the Worlds) . We passed half a boat length in front of them at the last windward mark and could thus win the race and the championships. The race committee did an excellent job. Starting the races on time. Shifting the marks rapidly as the wind shifted. No unnecessary waiting times on the water. It could not have been done better. In addition the starting line was 500 meters from the harbor. We have never sailed a more efficient racing series!” Nordblom tells.

Also Mikko Räisänen comments after a great event: “The race course was in a fjord area where it’s very difficult to sail because of the current. It’s coming in from a Oslo fjord and a huge river. The current is affecting the race course area which comes inside the fjord directly from Sweden. My crew (Ollie Hartas) stated that this is one of the toughest place where we’ve ever raced!” Hartas, only 21 years old and 18f Skiff skipper from Australia, has now been crewing team Formule 18 Lion of Finland team for his second season. “We suprised after the first start. We rounded the first top mark in the first race as last boat. After we finaly realized what to do in this area we scored all our races in top four. That’s how we secured our spot on the podium. The Swedish team with Fredrik Karlsson and Niklas Nordblom won the Nordic title and did an extremely good job in very hard conditions. Risk management was not on their list at all, they had the courage to ‘go deep’ every race.“, says Räisänen (who has been driving the F18 for only two seasons) Also the local yacht club organized a very nice and smooth regatta. Two evenings of serious F18 parties were held and of course the local shrimps were offered to all the sailors.

Many teams now prepare for the next event: the famous Stockholm Archipelago Raid. The event starts next week on Thursday August 27th in Stockholm and sailors will have a holiday feeling battling each other with various lunch stops. At the end of the day they’ll have dinner togerther and talk about all the exciting moments they’ve been experiencing, of course with a nice bottle of Swedish beer. OVER 500 photos can be viewed here.