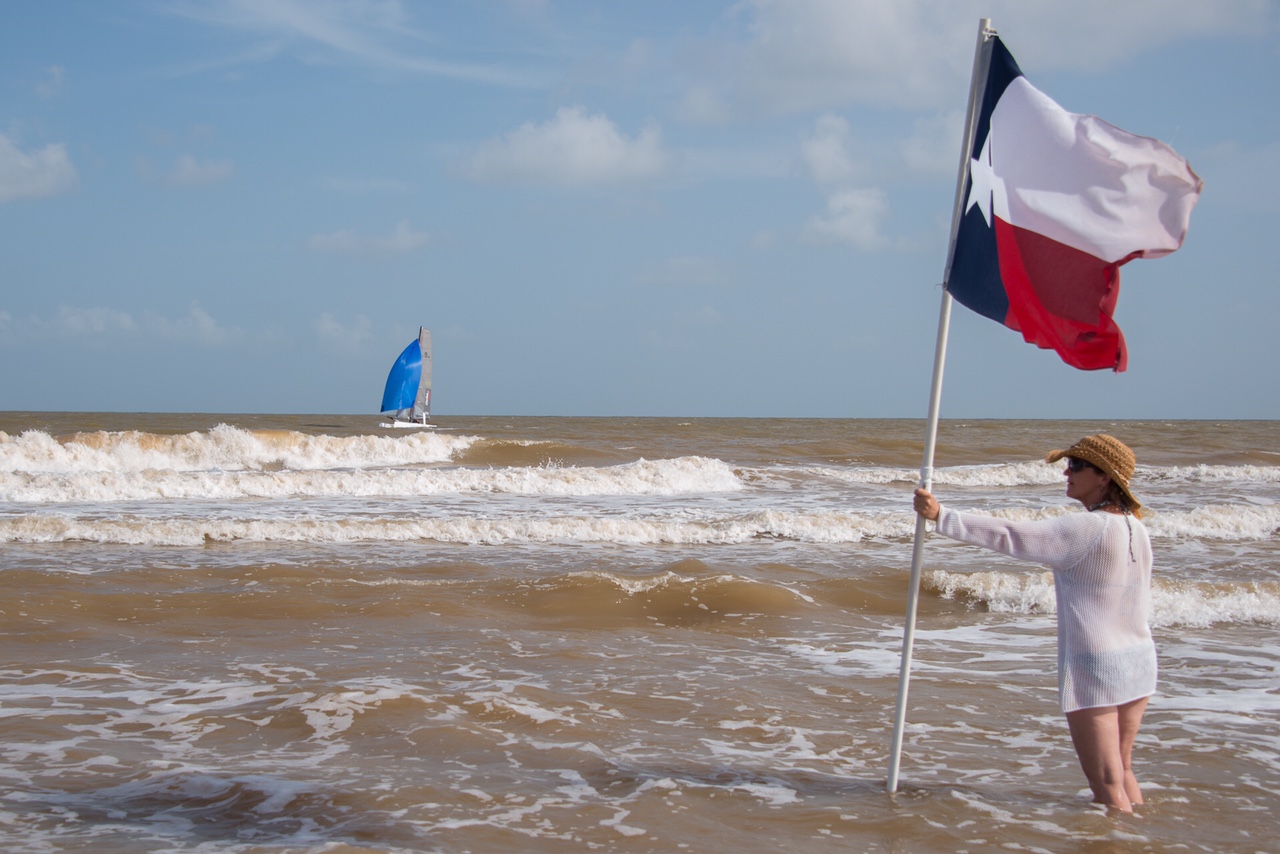 From June 18-20 the Great Texas 300 was sailed. Not any easy job at at all because of Tropical Storm Bill coming straight onto Texas from the Gulf of Mexico. During the sailors meeting, just two days before the start, they had to decide what to do with this situation……but in the end the 2015 edition of the Great Texas 300 was a big success, again! This 300 mile romp up the Texas Coast that started on Thursday, June 18th in South Padre Island, Texas and finished on Saturday, June 20th in Galveston (Texas). 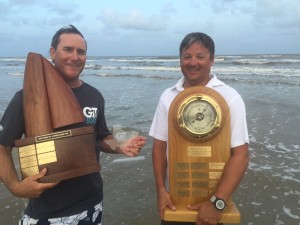 The incredibly fast Team Lupe Tortilla with John Tomko and Ian Billings took line honors on their C2. In just 17 hours and 39 minutes they covered the 300 mile course in three legs.  The defending champs took a punch on the starting line with a broken rudder, but once back in the ring, they tore the coast up. Steve Piche gives us a nice recap.

While the race was run in near record time, it looked uncertain the days leading up to the event whether the race would take place. An early tropical storm named Bill ran headlong into the Texas coast the day prior to the scheduled start of the race. With high winds, big surf and extensive flooding, the race committee decided to postpone the event for a day and combine the final two legs. Fortunately, the delay worked and the race was run in three days rather than the traditional four days.

On the first day of the race, Remnants of the tropical storm presented challenging sailing conditions. The Great Texas 300 has beach starts and finishes. A series of big waves broke on Team Lupe Tortilla as they headed out through the surf after the start of leg one resulting in a broken rudder arm. They went back ashore and replaced the whole rudder assembly. Starting 10 minutes in the hole, they were able to knife through the whole fleet to finish first despite being last off the beach.

Other teams did not fare as well. Sailing downwind in big seas and a 15-20 knot breeze, Team Jack Flash, Collin Casey and Joshua Grissom, pitchpoled soon after the start. Collin hit his head during the pitchpole and received a bad concussion. Unable to continue the sail, the US Coast Guard rescued the skipper and crew and brought Collin to safety. He went to the hospital and was later released. Team Chiindi, Brett Johnston and Anthony Acquilla also ran into trouble. Anthony got separate from the boat in the big seas and they also needed Coast Guard help to get him back on the boat.

After an eventful first day, the winds and waves laid down and the sailors enjoyed beautiful conditions (south breeze at 10-15 knots) for the next two legs of the race. After clearing the surf line each day, spinnakers were set and out on the traps went both sailors for a 100 miles double trap spin reach. It was awesome sailing conditions with the miles flying by at an amazing rate. There is nothing quite like running 100 miles on an spin reach on an F18 adjusting nothing but the spin sheet and traveler the whole way – just pure awesome sailing. 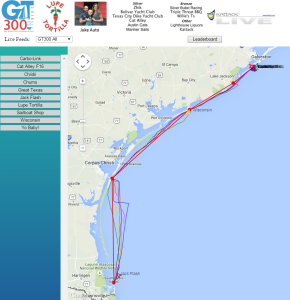 Once again, Lupe Tortilla was able to win both legs although they had to work for their stage wins. Overall second place team Yo Baby!, Shannon Galway and Jonathan Atwood, and overall third place team Sailboat Shop, Mike Rohrer and Chris Holt, both teams sailing C2’s, gave Team Lupe Tortilla a fight but John and Ian ultimately put the pedal to medal and won the legs. It was a good showing by the defending champions.

Hats off to the race committee who persevered despite the tropical storm and put on a heck of a race. To see complete results and detailed stories on the race go to www.gt300.com. You can also follow the race on Facebook by liking the page www.facebook.com/greattexas300. The 2016 Great Texas 300 will be held June 15-18, 2016 and you are invited to join the race up the Texas Coast! Check Steve Piche’s daily blog if you want to have a good view on what’s been going on!