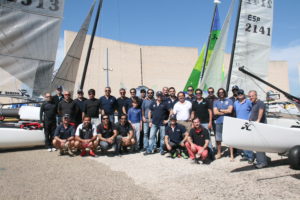 The crew formed by Rafa Martin-Prat and Adriano Patrón award the first day of the Catamaran league where it is to stress the pretty good level of participating boats.

Organized by the Nautical Club Port Sherry and the Andalusian Secretariat of the Class Catamaran (Catassur), with the collaboration of the Andalusian Federation of Sailing and the National Association of Catamarans (ADECAT), and supported by Port Sherry, first racing day of the Catamaran League started under a magnificent weather, the 19 boats waiting until 3 pm for a westerly light wind of 6-7 knots to rise, permitting a unique race to be sailed.

It is to emphasize the magnificent environment, as well the number of participating teams, who deploied  their sails in the Bay of Cadiz, auguring a very contested 2017 league, next event being scheduled on 8th April.