What a day in Copenhagen at the Formula 18 Worlds 2017! Conditions were totally different compared to the previous days: Sunny, 18-22 knots and some serious F18 champagne sailing! The Belgiums exchanged places…. the youngster from yesterday replaced by current European Champs Patrick Demesmaecker & Gilles Tas. Extremely well were the results by Mischa Heemskerk and Stephan Dekker (NED) with 3 wins today and climbing to 4th position overall. 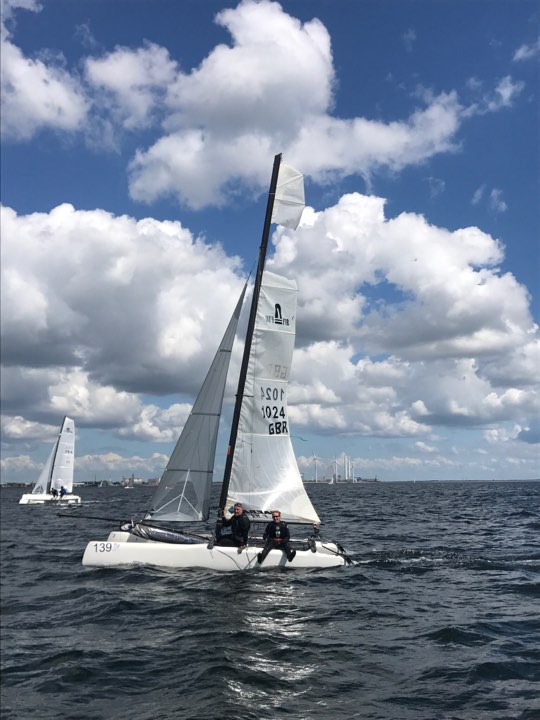 Race 1 was a real battle against the elements. The race started with a 18-22 knots breeze, but also caused a lot of damage in both fleets. Many boats ripped spinnakers, mains, spin halyards and went back to shore to repair/replace and head back out to keep racing. In Silver Fleet boats went back to shore as a Swedish boat (SWE 121) but came back as a Australian causing a lot confusion on the course. In the second race conditions were more friendly with 10-18 knots, but not all boats were able to make it back in time to start this race within the time limit. The young Australians Hughes/Rietman, who were Top 25 yesterday, dropped to the 40th position because their kite halyard broke so DNF and then missed 2nd race start by just 1 min. Luckely for all sailors after tomorrow another result can be dropped (but 3 races need to be held at least) . The last race of the day was a gentle one again with 10-18 knots of breeze.

We were able to have a chat with Lars Linder, president of the Swedish F18 Class Association: “Today was a fantastic day on the water with perfect F18 winds, really big fun! On the long reach between the spreader marks we were roaring in 20+ knots with 10 boats around us. Even the last 500m to the finish line was so close racing every race. Really amazing! We were often battling with the same boats for the entire 45 minutes. In the 2nd race for example, we had a battle with William Sunnucks (GBR). Eventually he won, but we’ll get a new chance to beat him tomorrow, and also during the F18 Raid Worlds in 3 weeks.” Lars Linder is referring to the first F18 Raid Worlds held in the famous Stockholm Archipelago, where many international teams will join for 4 days of Long Distance sailing.

Video: Hartas Productions
Photos from  the photoalbum of the Facebook F18 Worlds 2017 -> Part I and Part II and Part III