Kieler Yacht-Club is heading for a new World Record. The Formula 18 World Championship (11-18 July 2015) has already registered 194 entries from 24 countries at the end of April. The maximum available slots of 200 catamarans is close from being reached. This has already exceeded the previous record of 185 crews that participated at a previous World Cup in Kiel-Schilksee. The Formula 18 catamaran class is more active than ever for this edition of the F18 Worlds and will give an even bigger push for the future.

“We would be very delighted if there are really going to be 200 teams at our Worlds. But it’s already clear that this will be a great event”, says the German chairman Jens Uwe Tonne. The cause of this strong growth can easily being explained from his point of view. “Germany itself has a large and active fleet with over 55 boats. But it’s also the ‘Call for Kiel’. The famous Kieler Woche is favorite among sailors worldwide and easily to reach by a big fleet of Scandinavian crews.”

The massive interest and subscriptions straight after opening the entry portal shows the high ambitions of the class. Tonne:”Even without an Olympic status the Formula 18 class is at a very high level. It’s the nursery for future Olympic champions and also a playground for current Olympic catsailors.”

The German entries alone make it a national ‘Battle of the Titans’ already. We can expect a battle between René Schwall (Olympic Tornado bronze medal in 2000), Justus Wolf (European Tornado Champion 1988), Eckart Kaphengst (Olympic Tornado participant 1984) and Helge and Christian Sachs. The ‘Sachs Brothers’ were the Tornado vice-world champions in 1994 and won the F18 Worlds in 2006. “We expect a high ranking for the Sachs brothers. After all, they know the Kiel area the best. But, also Jörg Gosche and Hannes Pegel have a good chance for a top position,” says Tonne, who would not tie up for a favorites role. The defending World Champion Gunnar Larsen from the Netherlands, the Australian and American teams will be favorite. 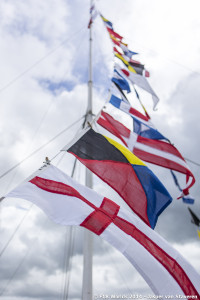 It will be a highly interesting international event with participants from 24 nations. “The class is working very well. We are organized in 25 countries throughout the world, and almost all of them will join us in Kiel,” says Tonne. The secret of success of Formula 18 lies in the very high speed of the boats which continue to evolve. “The model of a class with a Box-Rule, which specifies only the crucial hull and sail specifications, works extremely well. We have seven or eight manufacturers and a constant evolution. So the wave-piercing hulls with a high lift are up to date with the latest designs. And the used sail rig and cloth used are extremely modern. Nevertheless, the price level is affordable for everyone. By having a minimum overall weight of 180 kg, the expensive hunt for lighter materials is prevented,” says the German chairman.

Tonne expects the Formula 18 Worlds in Kiel will give the German class a further upswing, which has grown steadily in the last couple of years. But also internationally: “In Scandinavia for example. It is possible that the Formula 18 Worlds will be held somewhere in the North in about two years. But we can promise that you’ll see a spectacular footage from Kiel in July.”

In the ashore program – participants, families and fans will be offered a lot. With the help of various partners, national and international class associations there no less than two sailors dinners are sponsored. The sailors will also have tracking during races so fans will be able to follow then at all times including images from the water. This will be an open channel with TV images. Of particular note is the sophisticated logistics concept that will be new in this class.

Sailors can park their catamarans at a central location on the beach of Kiel-Schilksee with a short distance to the campsite, which will probably be fully booked for the World Cup.

“As an organization we are in good contact with our colleagues of Strander Catamaran Sailors and have regular meetings with them,” reports Nicholaus Rickers, CEO of Point Of Sailing. “The timing of the Formula 18 Worlds just before the start of the school holidays in Schleswig-Holstein has been chosen well. Only 2/3 of the beach will be used by the event, so there is plenty left for the regular visitors, divers and tourists. These Worlds will bring a lot of excitement and entertainment to the beach. All of this is possible thanks to great cooperation between the local community, the state capital Kiel, the Kiel marina, the German Formula 18 class association, the Strander catamaran clubs and the Kieler Yacht-Club.

The race area is flexibly designed on an axis between the Strander Bay and Kiel Lighthouse, so fast ways to the sailing area are possible, and up to four races a day can be handled.