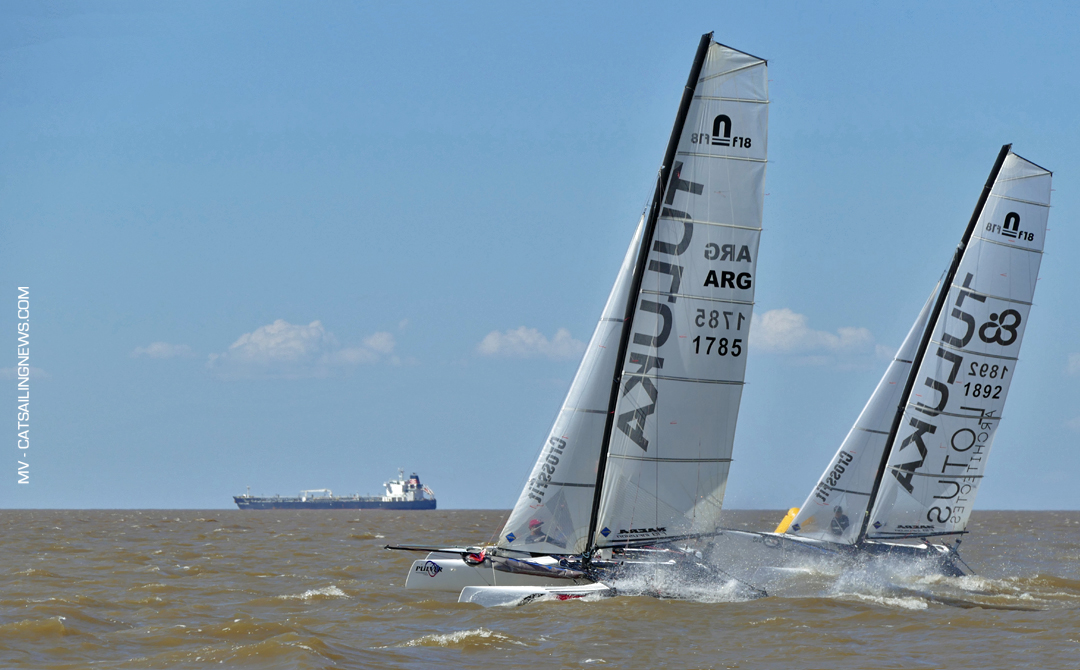 From 11 till 13 December 2015 the second stage of the F18 Argentine Nationals 2015 took place in Buenos Aires at the Club Nautico San Isidro. Agustín Krevisky & Billy Lopez Segura dominated this second event with 4 bullets out of 7 races held in a wide variety of winds. On Friday four races were held with windspeeds above 20 knots. In these conditions Juan Faustin & Nico Aragones did a good to grab the lead on the first day. On Saturday the wind dropped and unfortunately the only race the RC started had to be cancelled because it couldn’t be finsihed within the time limit.

On Sunday the sailors had a gentle 8-10 knots of breeze and were able to sail three races. Agustin Krevisky and Billy Lopez Segura dominated the day with three wins and herewith won the second part of the Argentine Nationals. Second place was for Cruz & Mariano and 3rd for Nahuel Martinez & Lucas Gonzalez Smith.

Argentine Champions 2015
Gathering the total points of the Setubal Regatta and this weekend racing in San Isidro Cruz Gonzalez Smith & Mariano Heuser crowned themselves Argentine Formula 18 Champions for the 4th time. Pablo Volker & Juan Martin Benitez were the contenders for the title after their second place in Setubal, but a 4th overall this weekend relegated their chances for the title. They finished as Vice Champs 2015. 3rd place for the global Arg crown was awarded to Agustín Krevisky & Billy Lopez Segura, winners of this weekend regatta.

Full and detailed results of both events can be viewed here.

An extensive artice about sailing in Argentina, development of the class in the South America area and more can be read here on Cat Sailing News. For more info about the Argentine Formula 18 class, check their official website.