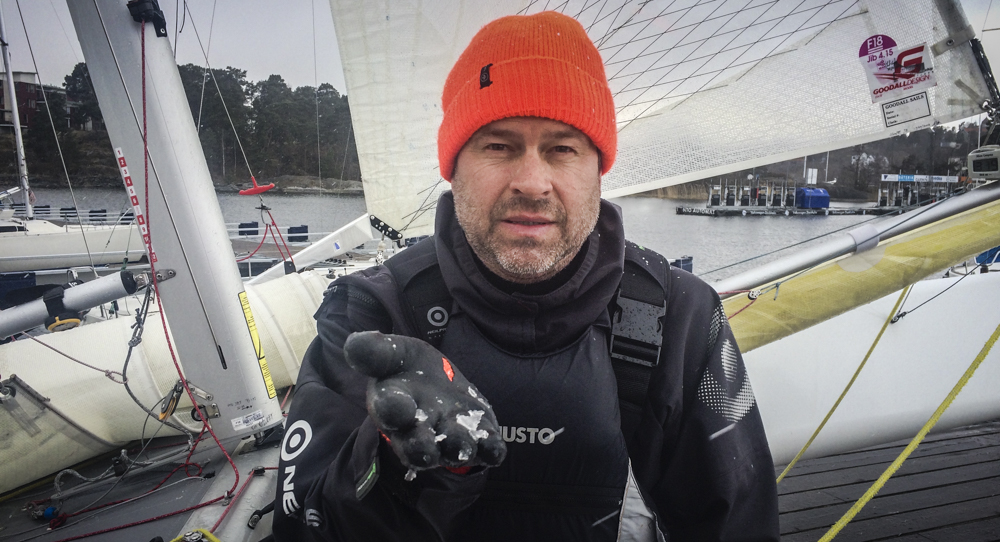 It’s been a cold & rainy weekend in Europe, but nevertheless sailors went on the water for some nice Formula 18 events. It show F18 cats don’t have cold water fever at all! 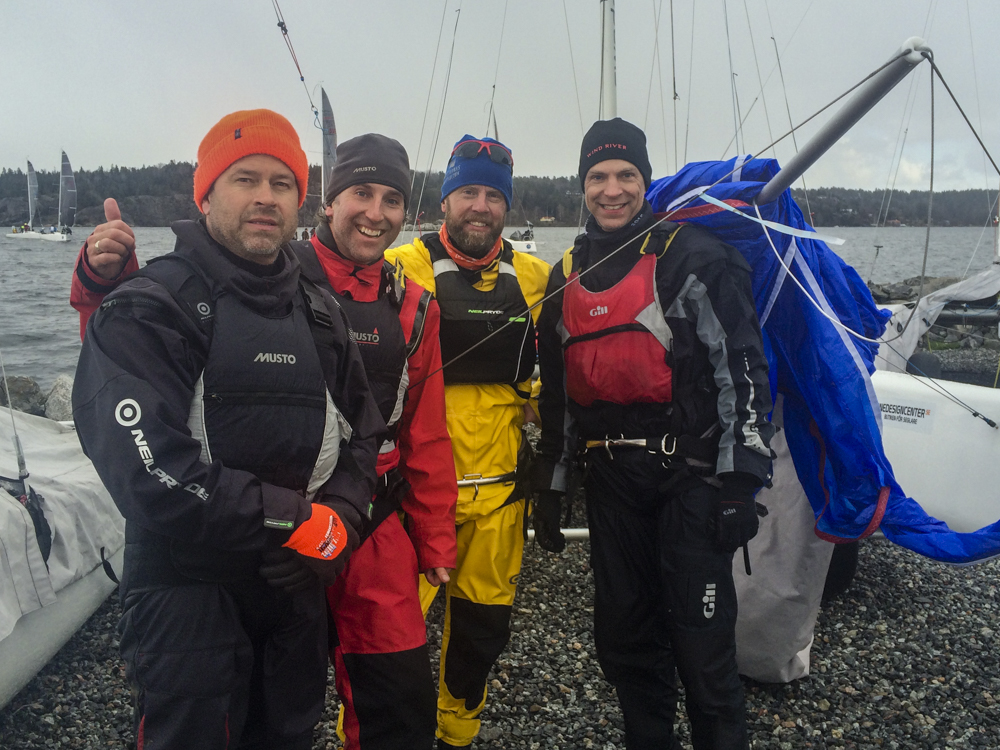 The first regatta of the Swedish F18-cup took place in Stockholm on Sunday April 24th. “The sailing was great with 6 tight races, a perfect F18 breeze and a great race committe” says Lars Linder, one of the contestants. “It was a small fleet today, but the best teams where present. The teams where a bit ‘rusty’ and some basic mistakes where made. Positions among the top teams shifted and it was a close call until the final race. Finally Fredrik Karlsson and Niklas Nordblom was the strongest team and won the regatta.”

Weather all over Nortern Europe is pretty unstable and unusually cold for the season, Stockholm was no exception: “It was only one or two degrees, very cloudy, windy and quite cold” continues Lars. “When it started to hail between races we were seriously wondering what we were doing. But then the start sequence was initiated and I immediateley forgot all about the weather and focused only on the race and all the fun sailing. It was an awesome day”.
Netherlands

In the Netherlands sailors are competing for the Spring Cup 2016. This serie is sailed on two different locations (Muiderzand and Hellvoetsluis) at the same time and will end on May 1st. The combined fleet sizes are big enough to have this event on multiple locations. In Muiderzand the Dutchies Arjan Baas with his new crew Tjalko Jansz did a good job. One of two races they’ve sailed on Sunday they ended with a first place. “We were very happy in the heavy conditions last Sunday. With guts of 31 knots it sometimes was like a survival. Oscar Zeekant and Charly Begemann won the first race, but to ‘lose’ this race from the vice-world champions is not a shame at all. We’re also very happy to please our name sponsor we have for the fifth year in a row again while we’re leading the Spring Cup in Muiderzand”, smiles helm Arjan Baas (NED 109). At Hellecat (Hellevoetsluis) Cees van den Bos and Erik Schrader are leading the other Dutch Spring Cup in the F18 class.
UK 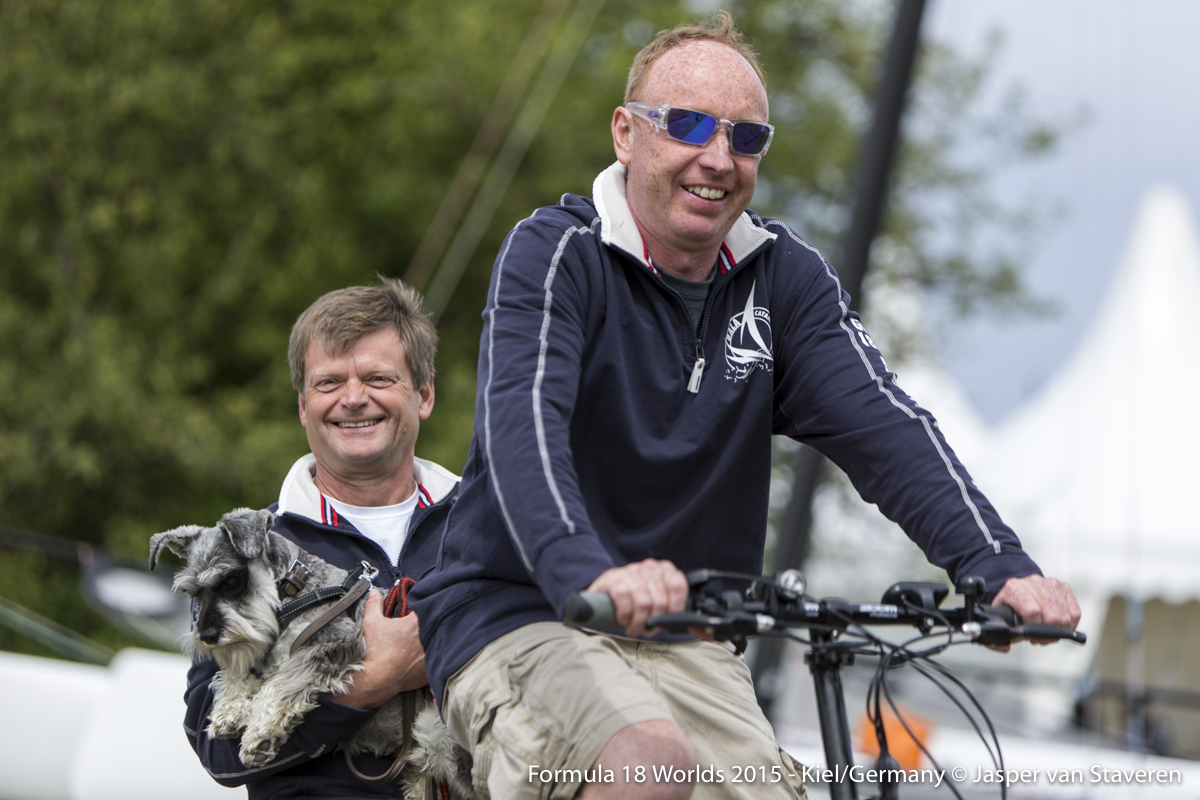 In the UK they’ve only had Datchet so far so Euro Cat in France is their big event! The Brits are about to occupy France based on the number of entries by country. Simon Flack: “The armada of F18s are locked and loaded for the ferry. Oly & Simon Northrop have completed the recent marathon, along with Neil Green who completed the New York marathon in under 4hrs. Grant has been honing his foiling skills with A-cat and nacra F20 along with Will Sunnucks blazing the technique with his infamous foiling Vampire! Chairman Simon Flack had been mountaineering and finding fresh powder snow in the Alps being caught in a massive Avalanche which he survived! We’re all hungry, we’re like caged lions….!’ We’ve been told that they will be there with wives, girlfriends and their team mascot Jon the dog again.

Last weekend there was only training, Denmark is working towards their first reggata (MS Open) on 4-5th of June. Penny Wyon: “We had a beautiful sunny day, set off in 4-5m/s off-shore wind and sun-glasses. We saw the front come over land, a dark grey cloud edge – looked like rain or maybe nothing- and suddenly it snowed! Our trampoline was covered in 1cm snow and our ropes froze, winds increased and it became quite gusty. An hour later we were back on shore with blue sky and sunshine. Again, a really great training!”