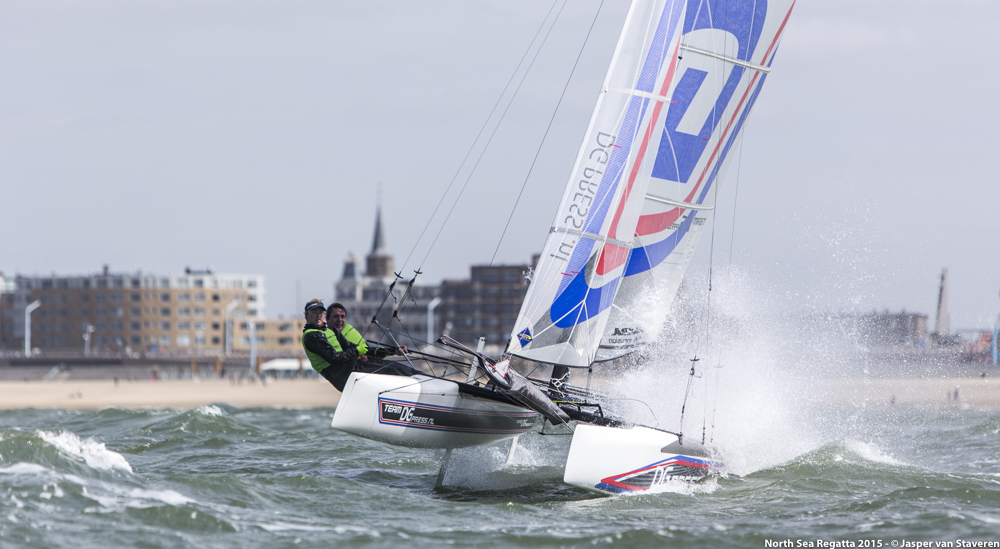 Last weekend Oscar Zeekant and Charlie Begemann were on fire. On Saturday the won all three races in some tight battles with Jorden Veenman and Frank de Waard in 20+ knots of breeze. On Sunday and Monday the  conditions were much lighter (~10 knots) and was the moment for the lighter teams to close the gap. In the last three races everything could happen and was decided in the final race. For the first time in their sailing career Zeekant/Begemann won the North Sea Regatta and is a team to keep an eye on for the oncoming Worlds in Kiel. At their last Worlds in 2012 they ended up 2nd…

Begemann: “It wasn’t an easy job at all. Veenman/De Waard were on our tail, so we had to keep focus at all time. The heavy sailing conditions are in favour of both of us so we had some nice battles on the water.” Many sailors couldn’t handle mother nature what resulted in some nice nosedives. On Sunday it was one big lottery. “First you had to choose if you would go to the open water or stay near the beach. But a nasty swell was a big disadvantage for the heavy teams. When you were hit by such a wave you just stopped and were overtaken by the lighter teams”, says Veenman.

Zeekant/Begemann are looking back at a succesfull event and hope to continue their series of victories. Next on the bucketlist is the Texel Dutch Open and of course the Round Texel race.

A photo coverage of the Dutch F18 class at the North Sea Regatta 2015 can be found here.