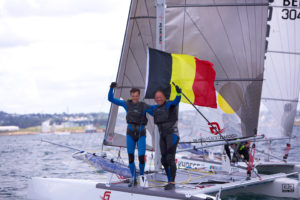 The Belgian team not only managed to have sufficient points ahead of their closest contenders in order to secure European Title, but they did it an elegant way, winning the last long distance race sailed, and then leading the parade all along the Tall Ships gathered in Brest Harbour.

With a very consistent series, there was no real concern on BEL 1 board before starting the long distance course prepared by the Organising Committee, pressure being rather on NED 4 Van Dijk/De Waard, with five bullets, but a disapointing Day 5, just 3 points ahead NED 1912 Delnooz/Van Leeuwen, who suffered from one UFD and one BFD. At the end of the day, it was just one point left between the two Dutch teams, who have been playing cats and dogs the whole week… 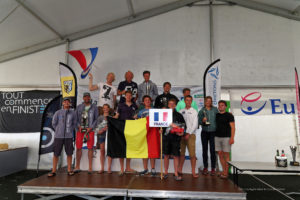 Sailing conditions during long distance have been once more excellent, providing sailors with great sailing and excitement, and the parade has been an emotional moment when F18 fleet crossed over Brest Harbour in front of thousands of spectators. 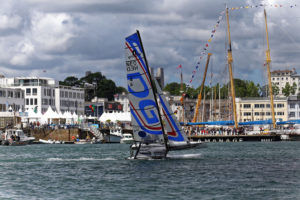 With 50 teams coming from 13 Nations and 3 Continents, 2016 Europeans are a true success, and it is impossible to conclude without heartily greeting USAM Voile organisers, whose volunteers have been truly dedicated to F18 sailors the whole week along.

Those not attending definitely missed something great !