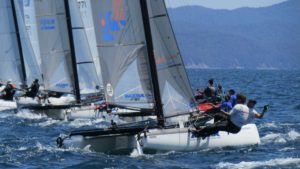 From 22 to 25 June, the Formula 18 Catamarani Italia held its national championship in Follonica, at the Lega Navale Italiana Sez. of Follonica. Four days of intense and never-hoped races.
The twelve scheduled races have been completed, under a south light wind for the first three days, to an average wind in the  12 to 15 knots range on the last racing day. 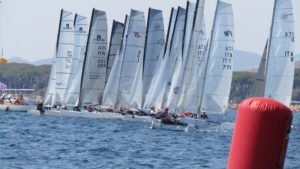 From the begining, two teams contended the title with repeated alternation of first and second places, with continuous exchanges in the positions in the following fleet.
With 6 bullets, 4 second, and discarding a 2 and a 6, Christian Vettori and Maurizio Stella have been crowned National Formula 18 champions for the year 2017, just ahead, by only one point, Mazzucchi-Lisignoli, reigning National champions. Third place for De Grenet-Marzorati, and, according to Formula 18 tradition that rewards the top 5, fourth place for Radman-Cioni and fifth for Ferrari-Canepa to complete the podium. 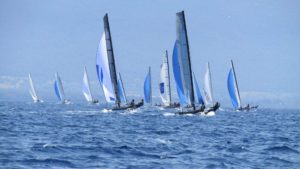 The compliments of the Class go to the Organizing Club, always present on the ground and in the water to assist the regatants. On the water with so many inflatable boats and staff, and ashore with daily pasta parties and a great social dinner “Tuscan style” offered to competitors.

The Regatta Committee was always ready to reposition the playing field, following the wind rotations and setting the conditions to adjust racing to target time, for the greatest pleasure of the athletes who reached the Tuscan resort to enjoy sport and competition.
All news on the site www.formula18.it, so many photos, direct streaming on Facebook and tracking U-Track.it.
Season continues with the F18 Worlds in Denmark and the Rimini National Regatta.
From Alessandro Pelliccia
Ufficio Stampa e Sito internet
www.formula18.it infopress@formula18.it
cell. 349 8078321