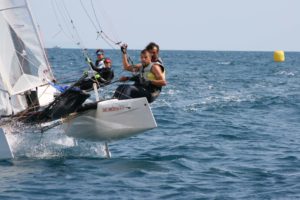 From August 30th to September 2nd, Gaeta welcomed the Italian Formula 18 Championship. The event took place in Gaeta gulf, benefiting during summer months of exceptional weather and sea conditions for regattas and sailing activities. The Nautical Base Flavio Gioia, the Yacht Club Gaeta, the Sailing support staff of the Guardia di Finanza and the Papardo bathing establishment supported the event, the Race Committee receiving full compliments from the Italian F18 Class and from all the participants for being always ready on time and for properly and quickly positioning the playing field.

Regattas started on Thursday with the local thermal rising from 9 knots up to close on 14. Three races disputed and immediately highlighted the crews who will compete for the title.

Friday, second day of the race, similar conditions with some reinforcement in the sixth race. A succession of first and second among the leaders of the provisional ranking. Saturday, as forecast, weather conditions unstable from the early hours of the morning hit by a violent storm. Situation that has not discouraged to running the long distance scheduled. Boats at about 13 o’clock and down the coast north of Gaeta to admire the coves and beaches. Little wind for the test with moments of drool, and reduction of the path in front of the “Broken Mountain” the promontory on which stands Gaeta medieval. Sunday, the last day of the race for the assignment of the title with morning wind of perturbation on 18 knots from the east. The Committee calls the boats in the water and start for the 8th race, not even the time to reach the windward mark that suddenly falls and the thermal rotation starts. Follow me on boat Committee and repositioning the field with the typical SW on 10 knots up to 15 for the race 10. 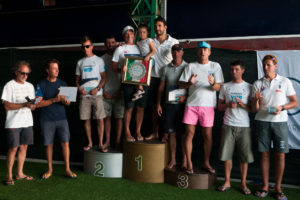 This last race has decreed the Italian Champion. Suspense, tactics and strategy for the two leaders who will close on equal points. For the game of the best placings, the Italian Champions, the Vettori-Stella gardesani, are graduating, repeating the success of last year. Silver for Mazzucchi-Lisignoli, who until the end were in the race. Third position of the podium for the tuscan Radman-Cioni. And as per tradition Vaccari-Meoli quarters and to close the placements from Fantasia-Recalcati awards.

We close the report by quoting the two very young crews who entered in the Formula 18 Class, becoming passionate and having fun with the certainty of bringing for a long time the passion for fast sailing with them: Luca Di Nisio-Bianca Appignani and Lorenzo Amelii-Mattia Schipani.

Please visit www.formula18.it website to get all the news and lots of photos.

Italian Formula 18 Class will close the season with the regatta at Sunset di Calambrone the first weekend in October.