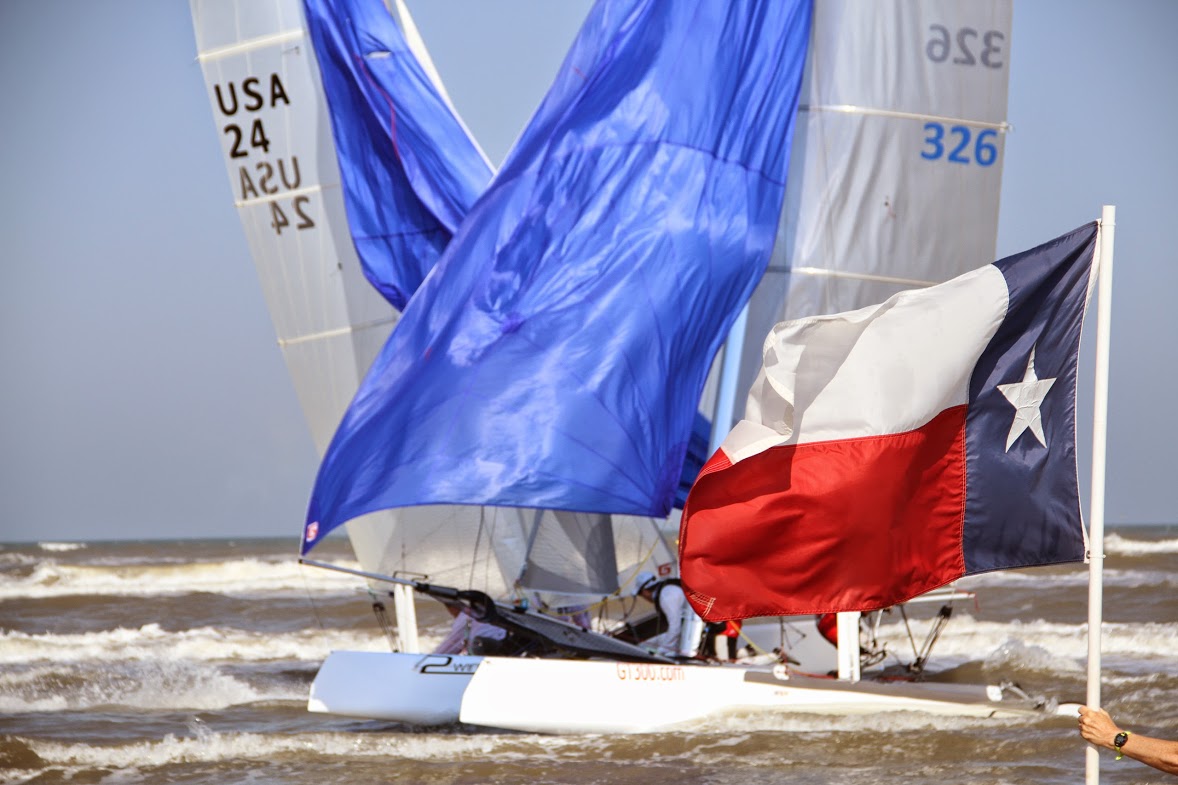 What is more fun in the world than putting the spinnaker up on your F18 and sailing 100 miles downwind at a screeching 15-20 knots the whole way! Not good enough for you? You want better? Well, how about following that 100 mile downwinder by a 100 mile double trapped reach! Ah, still not satisfied? How about two more days of sailing another 100 miles! All of this on the open ocean and beaches of Texas! The Great Texas 300 welcomes you!

Yes, it is once again time for the Great Texas 300 – a 300 mile romp from South Padre Island, Texas to Galveston Island, Texas over a four day period from June 17th to June 20th 2015. In other places in the world, you may call this a raid. In Texas, they call it just plain old fun. This is catamaran sailing’s version of bronco busting. Three hundred miles of high speed sailing testing the skills of the best modern day catamaran sailors on an off-shore playground as big as Texas! How long does it take to do those 100 mile legs? Over the 12 years, it has taken them on average less than 7 hours to cover 100 miles. They are blessed with good winds in mid-June (typically 15-25 knots) which allows them to scream up the remote (and mostly unpopulated) Texas coast. John Tomko, who has won the race too many times to count, has covered a 100 mile leg in a little over 5 hours – that is averaging 18 knots on an F18 – not too shabby. 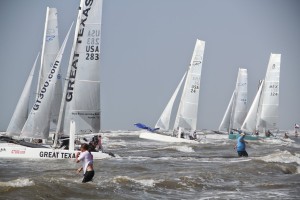 The party known as the Great Texas extends from the water on to the shore where Texas hospitality rules the day. After 100 miles of sailing, you are welcomed ashore with a heaping plate of Texas BBQ (brisket, ribs and sausage), a cold beer and lots of warm smiles from a dedicated crew of volunteers who follow the race up the coast.

On the last leg of the race, local racers are welcomed to join in on the fun for a final 40 mile Dash to the finish! Everything from ARC 22’s to Hobie 16’s join in the final run to the finish. Everyone gets a big hand from the crowd when they cross the finish line in Galveston whether they sailed 40 miles or 300 miles.

The organization would love to have you join the Great Texas 300 (June 17th – 20th) or the Dash (June 20th) as a sailor, volunteer or spectator. For more information, see www.gt300.com or like us them on Facebook at www.facebook.com/greattexas300