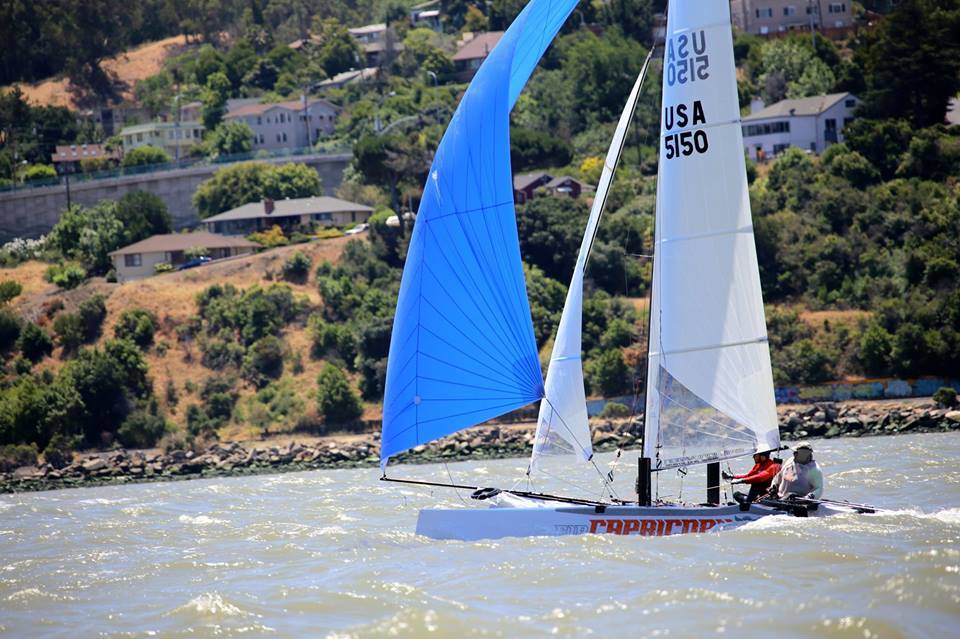 This year was the 25th anniversary of the Delta Ditch Run. Rich Vilvens entered with Jacob Sailer on F18 Capricorn for this 67 mile run from Richmond Yacht Club to Stockton Sailing Club. Friday they picked up the boat and delivered it to RYC. They rigged on the lawn and then moved down to the dock. Then they took the trailer to Stockton and we were ready for the weekend. Jacob rode down with them and they got to the RYC in plenty of time to rig and make last minute adjustments. With the sails up they rolled into the water and pushed off to make their way to the start. Daisy packed up the beach wheels and hull pads in the truck to meet us in Stockton.

Rich Vilvens: “We sailed out to the start area and knew we were in for a wild day. The wind and waves were both up and we looked to depower and made plans for our start. As we watched the last of the monohull divisions start the amount of knockdowns and round up was amazing. We took the gun and were off mid pack. Watching the big cats shoot down and the foiler jump away we chose to keep the spin down and 2 sail reach for control. We sailed out around the brothers and then gibed onto Starboard and set the spin. We were pounding into waves and would drop speed. We kept the spin up till we gibed and as we were driven down we put it away. We were now sailing deeper on 2 sails with less speed. This cost us some position however made it easier to keep the boat upright. We were picking through each fleet that started in front of us and making time. San Pablo bay found us up on the nose more times than I was comfortable with. The boat never pitch poled even when driven in hard. We stayed on 2 sails for a while and would see boats pass us then they would flip. Toward the end of the bay the wind laid down a bit and we got the spin up for a little while.

We made it under the first set of bridges and down into Suisun Bay. The wind and chop was up once again and the spin came down. We were back to VMG low and slow sailing at about 12 knots. We saw Ben on the Blue Nacra was having problems and we got back in front of them. We made it to the end of Suisun Bay and had some flat water and the kite came back out. Our speeds were up at about 16 knots and we were making great time.

As we entered the channel we got into the wrong area. We took the kite down but were in a shallow area. The wind was up and with the waves we saw how shallow it was getting. With the boat as depowered as we could get we chose a deeper spot to get back into the channel. I missed the deep water when a gust hit us. The boards were up but just enough down to dig into the sand bar. We nosed down and stopped. The boat rolled onto its side and Jacob and I began to right it. We lost about 5 minutes and we were sailing again. I lost half of the tiller and something didn’t feel right with the steering and I rechecked. The Starboard rudder was not all the way down. I pushed it back and locked it. We began sailing again and the rudder popped again. I noticed there was a piece missing from the locking mechanism so I got the rudder down with Jacob’s help and tightened the friction nut. This only lasted a little while and it was popped again. It was taking 2 people to steer and we worked out a plan to tie down in the first smooth section of water we found. We got some relief in the curves in the channel just before you enter the Antioch Bridge area. Jacob got the rudder tied down and we were off to the races again. We made good time through Antioch and saw 2 other F18’s over near a safety boat. The wind and waves were on again as we approached the mark 19 corner. I had climbed up to a F31 and decided to back off and not pass him. We used his wind shadow to turn the corner and were following him closely till we hit a tugboat wake. Four or five big waves killed our speed and we dropped back off. The wind and waves were still up in the front of the river. The reach down off 19 was brutal and we were doing everything we could to keep the boat upright. We passed another big tri and kept following Trident. Several bends down the river we got some much needed relief. 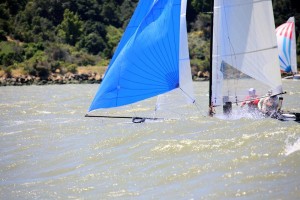 Now in the river things began to mellow and we finally got the spin up again. We went on nice long Starboard runs then a little short Port run back across the river. We finally had a good feeling about finishing but didn’t want to say anything out loud. Now as the wind went lighter and the water went flat the big F31 Trident pulled some distance on us. We picked up some debris on both rudders and could clear the port but didn’t want to risk untying the Starboard one. We soon saw the Stockton Sailing club come into view. We talked again about who was in front of us and who was behind. We thought we were in third but after we finished Mark and Valerie told us we were first.
We sailed to the Sailing Club dock and sailed in and spun up gently to the dock. Daisy was there waiting for us and had our wheels and chocks ready. We took the sails down and rolled Capricorn up to the trailer. We got changed and made a bathroom break and saw there were only bigger cats there. Shadow (Formula 40) won corrected, Smart Recruiters (Extreme 40) took line honors, Gladstone/Pieoligy (Nacra 20FCS), Nacra 20 had all finished in front of us, as well as Trident the F31. The Marstrom 32 Miller Racing was there but had a problem and scored DNF. As we finished up the boat Mikey and Fey finished second F18, followed by Ben on the Blue Nacra. Brett and Christine finished soon afterward.

We sailed for 7 hours and covered 80 miles. Average speed was 11 with a top speed of 20.8. We ran aground causing a flip once and broke a tiller and rudder lock down. 153 boats started 121 finished and we were first in class (F18), third in division (G Multihull), and sixth to finish overall. This was a very physically and mentally demanding race. I need to thank Jacob Sailer for all the hard work for the day. I also need to thank Daisy Eng for all the help with logistic and opening our home to the crew for the night. This is truly one of the highlights of my sailing career.”

The 25th annual Delta Ditch Run starts in the San Francisco Bay and goes up the Delta and finishes at the Stockton Sailing Club. In the past this event has attracted over 200 boats with racers from across the country showing up for this generally downwind sixty five mile race. Overall results can be found here.